Eau Claire Has a Plan to Fight Climate Change, Unlike Governor – Next City

Eau Claire Has a Plan to Fight Climate Change, Unlike Governor 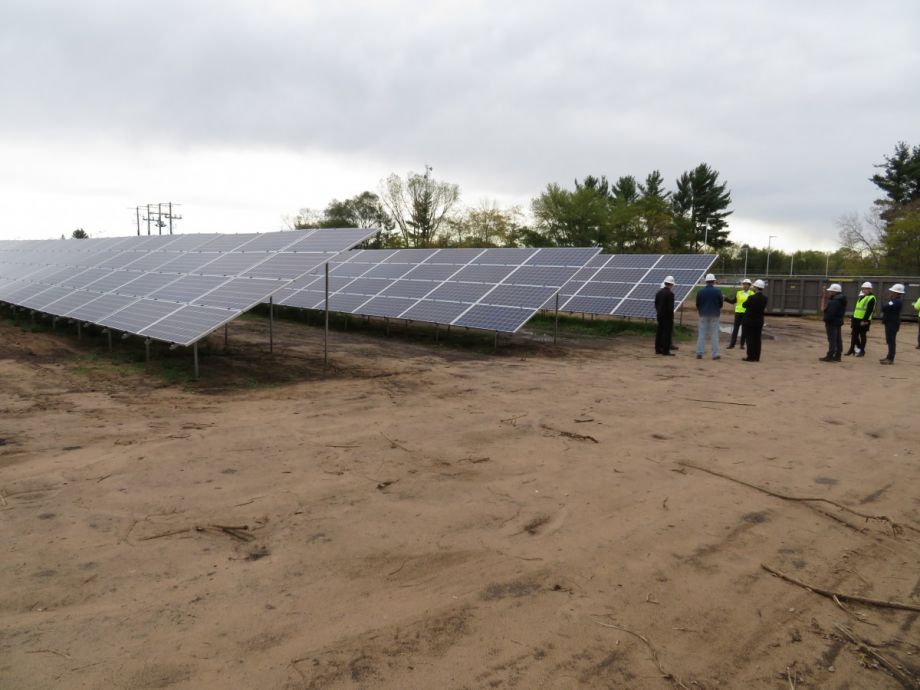 A new community solar garden in Eau Claire — the largest in the state, with more than 3,000 solar panels — on a former landfill site in the city. (Credit: City of Eau Claire)

By a unanimous vote at the end of March, Eau Claire City Council passed a resolution formalizing those two primary goals, setting a timeline to achieve a net-zero carbon footprint by 2050 at both municipal and citywide levels; and to achieve 100 percent renewable energy for both the municipal government and citywide by 2050.

Ironically, Walker may have helped spark the plan into existence. Eau Claire formed a temporary committee in 2013 to explore curbing or banning plastic bag use in the city. After a long period of convening with multiple stakeholders and nearly creating a plan to do so, the city gave up on the effort when the state specifically banned such efforts.

Out of the ashes of the plastic bag initiative sprang a new Sustainability Advisory Committee, formalized by city ordinance in 2014 as a nine-member volunteer citizen group with a mission to advise the council broadly on sustainability policies and practices. In light of the Trump administration’s decision last year to pull out of the Paris Agreement, Eau Claire City Council directed the committee last year to come up with a laundry list of recommended ways the city could align itself with the global climate change mitigation agreement. The council approved those recommendations unanimously last month.

Of Wisconsin cities, Madison is the only other one to commit to 100 percent renewable energy; Eau Claire is the first to commit additionally to carbon neutrality.

“In Wisconsin, and for a smaller city, we are pioneering,” says Associate City Planner Ned Noel, the primary city staff person working with the Sustainability Advisory Committee and author of the recommendations report. “Everyone knows Madison is progressive, but this is opening the door for other communities that are smaller and have less staff.”

Noel lists a number of factors that helped bring about his city’s climate action readiness: being a university town; a level of resident support, confirmed by a survey created with the help of a student intern; an “openness and willingness to be educated” on the part of local officials, businesses and residents; having an energy utility, Minnesota-based Xcel Energy, that’s already expanding its use of renewable sources; and having some local emissions data prepared in advance from a previous goal the city had set in 2008 to achieve 25 percent renewable energy use by 2025.

The March city council resolution also directs the city to formulate a climate action plan this year in concert with multiple area stakeholders, from residents and businesses to institutions, utility companies and transportation providers—and that’s where a picture will start to emerge of what, exactly, the city and community will do together to dramatically cut fossil fuel use and carbon emissions.

“These are big goals. It’s going to be a process,” Noel says.

The 10,000-student University of Wisconsin–Eau Claire is an important presence, with faculty lending science and policy expertise and students becoming active in the Student Office of Sustainability. The school had calculated its own carbon footprint, which helped Noel in creating the city’s own baseline figures. A student intern from the university created a survey that revealed solid resident support for city sustainability efforts, and even for paying more on their energy bills—with nearly half indicating they’d be willing to pay an extra $10 per month, and 26 percent of surveyed residents open to paying an extra $25 per month.

“That helped officials see their constituents across the city do care about these issues,” Noel says.

As one of the Sustainability Advisory Committee’s successes, Noel cites its productive collaboration with Xcel Energy, the city’s main electricity provider, to plan and implement a 1-megawatt community solar garden in the city — the largest in the state, with more than 3,000 solar panels — on a former landfill site in the city. Dubbed the “Sky Park Community Solar Garden,” it opened last October, offering subscribers a credit on their utility bills for the solar power without having to install or maintain their own solar panels. Subscribers so far include the city government, schools, and some homeowners, according to Noel.

The new sustainability resolution landed the city a spot in the Sierra Club’s “Ready for 100,” a program that honors and support cities committed to 100 percent renewable energy.

And later this month, Eau Claire will be the site of the Wisconsin Academy of Sciences, Arts & Letters’ annual Local Government Summit, where local leaders working on clean energy, climate mitigation and resilience will share ideas and resources.

Perhaps most important for the future of Eau Claire and following through on the city’s sustainability goals: attracting attention from millennials, whose influx into Eau Claire has helped boost population three percent since 2010.

Jeremy Gragert, a Minnesota native and environmental advocate who came to Eau Claire in 2000 to attend the university, played a role in building grassroots support for the city’s sustainability efforts and creating the Sustainability Advisory Committee. Now, he is a brand-new city council member. (Though he was not part of last month’s vote, having just won election on April 3.)

Gragert credits the successful passage of the sustainability plan in large part to Noel’s leadership along with a groundswell of popular support. “[Ned] brings people together to make things happen,” he says.

“The state has been taking local control away on almost every possible front. [But] there really is a shift, a bipartisan shift that local action is appropriate on energy issues,” says Gragert. “Wisconsin sends a lot of money out of state to buy coal and oil and gasoline. We’re wasting money, and it’s not very clean. We’re in a situation where a lot of people are thinking, ‘Yeah, we can do this.’”