During the Summer, Opponents of Density Go on Vacation

During the Summer, Opponents of Density Go on Vacation

After fighting density at public meetings throughout the year, even NIMBYs need a vacation. When the weather is right and they feel like escaping their one dwelling-unit-per-acre suburban subdivisions for some rest and relaxation, these neighborhood activists often head for places like the Jersey Shore. Although known for wide beaches, lively boardwalks, and amusement activities, a deeper look reveals that a good deal of the vibrancy in resort towns like those at “The Shore” may be attributed to something that many visitors would claim revulsion to in their hometowns: density. 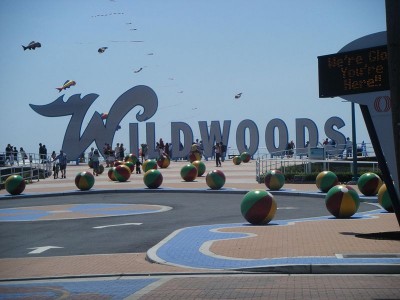 A case in point is Wildwood Crest, where even the quietest blocks have a typical residential density of around 12 dwelling-units-per-acre. A mid-July license plate check of any hotel in Wildwood Crest shows that for whatever reason, hundreds of families from Quebec to Virginia have chosen to spend a week or two here rather than anywhere else. However, a majority of those plates are from Pennsylvania or New York, and the dealership stamps (and the Honor Student bumper stickers) infer that suburban counties have the greatest representation. Most planners will tell you that those areas are usually the least likely to support things like infill development, multifamily housing, public transit, alleys, or even the addition of traffic-calming devices. So why, then, are they OK in Wildwood Crest?

Parents who fight ordinances permitting “dangerous” alleys at home let their children ride bikes alone through them at The Shore. Every block has a sidewalk used for short walks to shops, schools, churches, and of course the ocean. If the walk is too far there are trolleybuses, provided at low cost as a quasi-public transportation amenity. Single-family homes sit snugly next to each other or next to townhomes, which often sit close to lowrise hotels. Sandwich shops without dedicated parking spaces are full of patrons all day. Most homes have porches and families wind down the day by sitting in them and waving to anyone who walks by. Nearby Cape May was America’s first seaside resort town, and is now an international destination where the most treasured homes and restaurants front the busy sidewalks. Front yards are small and side yards even smaller, yet nobody seems to mind. Each of these features is part of a good planner’s urban design “toolkit,” and they help increase quality of life and set the stage for neighborly interaction (even among “shoobies,” or daytrippers.) They are things that planners struggle to convince towns to allow, yet are often denied by citizen groups who protest, citing concerns including…reduced quality of life.

Maybe the solution is for planners to show summertime images of Jersey Shore family fun during suburban planning and zoning meetings in the dead of winter. However, is educating the public about urban design principles the issue, or is it something else? A simple answer would be that the lure of the sea is strong enough to make us overlook the built environment along its shores, but that sure doesn’t explain the decay of Asbury Park, or the vacant townhomes one block from the Atlantic City Boardwalk.

Are the more urban features of beach towns something that is subconsciously sought out by disconnected suburbanites longing for community, or are they nuisances that are merely tolerated for a weekend or the season?