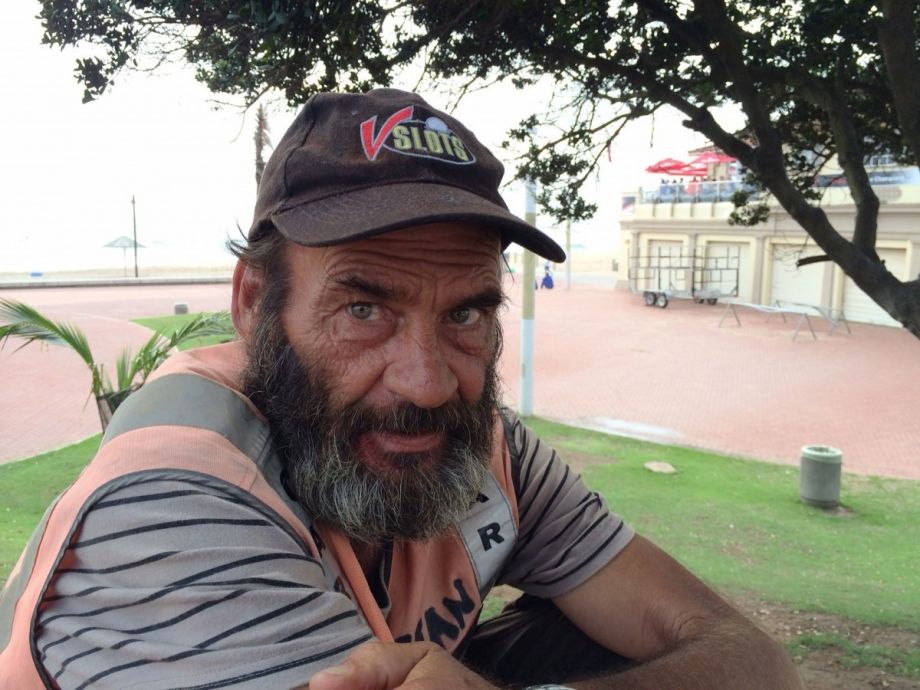 In Durban, car guards like Sean Mills walk the beat on major roads. They run the gamut from disheveled and smelling of booze to well-dressed and courteous. These self-appointed sentries guarding the city’s fleet of private automobiles are one of Durban’s oddities, and their presence is the subject of spirited debate.

Officials estimate there are thousands of car guards in Durban. Some are great crime fighters, while others are sometimes guilty of the very crime they claim to be fighting. Mills is one of the good guys. A shaggy-bearded 49-year-old with a weather-beaten face, he’s been patrolling the streets of Durban as an informal car guard for 20 years. He sleeps in a shelter and dresses shabbily, but has a loyal following among surfers who park near the beach. Their car keys are affixed to a large metal ring he carries on him at all times.

The city’s approach to car guards like Mills has been inconsistent. Depending on who you talk to, car guards are either a menace to society or valuable players in the city’s fight against crime. Occasionally the cops round up the city’s car guards in a bedeviled attempt to regulate them. Durban surfer and photographer Wade Howard says to many take car guards for granted.

“I, along with many surfers, cyclists and runners, just pitch up at the beach and dash off to go for a surf, leaving our keys with the car guards without giving it another thought,” he says. “This can be from 4:30 a.m. or 6 p.m. and they’re always there. I haven’t had any incidents since they have been there and I want to acknowledge their fine work.”

But as the city grows – along with the number of private vehicles plying its streets – some are saying the guard sector should be formalized. Steve Middleton, assistant commissioner for the Durban Metropolitan Police, wants car guards to be trained and registered. Efforts to fingerprint them en masse, which would enable police to check if they have criminal records, have had limited success.

“To a degree they are effective,” says Middleton of the city’s car guards. “If they aren’t criminals themselves they are definitely keeping an eye out for criminals. Some car guards are meticulous about keeping notes on suspicious characters. Others are just rag-tag deadbeats who will turn a blind eye to criminals. They stand on the street with a scrappy luminous bib and it’s a mild form of extortion really: they pretend to look after your car and then demand 50 cents when you get back to your car after nipping into the shop.”

Middleton says attempts to regulate car guards haven’t really worked. “Some are recognized by the police because they are part of official community policing forums. Some are presentable, polite and really vigilant. Some are affiliated with companies that run checks on them and manage them well. But some are completely independent.”

Ideally, says Middleton, a non-governmental agency would manage a permit system to regulate car guards. “But it’s not a policing function. We have about 2,000 uniformed policemen on the streets that we have to manage. That’s our priority.”

Dean McPherson, a city councillor who has reputation for getting things done, wants to take that notion even further, formalizing car guarding by introducing new bylaws. He argues that vetting is essential to root out the bad guys.

“Metro Police and car guards have to be partners and the city should create a platform to regulate this through bylaws… Regulation and formalization is imperative to ensure a better service to motorists and a better working environment for legitimate car guards. We have to work together. It makes no sense to have car guards being paid by motorists to prevent car theft and Metro Police doing the same thing but they aren’t working together.”

But the tide may be shifting already. Recently a security company deployed over a hundred uniformed sentries in key city nodes as part of an urban improvement precinct. And Windermere Centre, a shopping complex in one upscale neighborhood, has allowed a private company to post its uniformed guards around the parking lot. These guards look nothing like Sean Mills – mostly Congolese immigrants, they’re dressed in smartly pressed standard-issue uniforms. In addition to guarding vehicles, they help shoppers unpack their carts and they walk old ladies to the bus. Jocelyn Hallot, the manager of Windermere Centre, says about 19 guards are spread across 440 parking spaces.

“We’ve had them for about five years and they are really helpful,” she says. “They are presentable, they pick up litter and they have a great rapport with the shoppers. They are definitely a deterrent to crime.”

Joy Alberts is with the company that manages the Windermere Centre car guards, as well as hundreds of other car guards across the city. These guards pay a fee to be managed, which Alberts admits is controversial. Some people see such companies as exploiting honest workers who have no other way to earn a living. But Alberts disagrees with these detractors. She says her company ensures the car guards are easily identifiable, well turned out, well managed and accountable. She wouldn’t say how much the company charges the car guards to manage them.

Sean Mills, for his part, says he refuses to pay a company to issue him a bib or manage him, adding that he and his chums don’t have criminal records and are happy to be registered with the local police station and community policing forum.

“I’ve been locked up by the cops four times, but no charges were ever pressed,” says Mills, who has been stabbed himself while fighting off a car thief. “There’s a lot of riff-raff out there, but I’ve been here for 20 years. I don’t have a criminal record and I’ve been fingerprinted… Car guards are a great innovation in the fight against crime. We organize ourselves.”