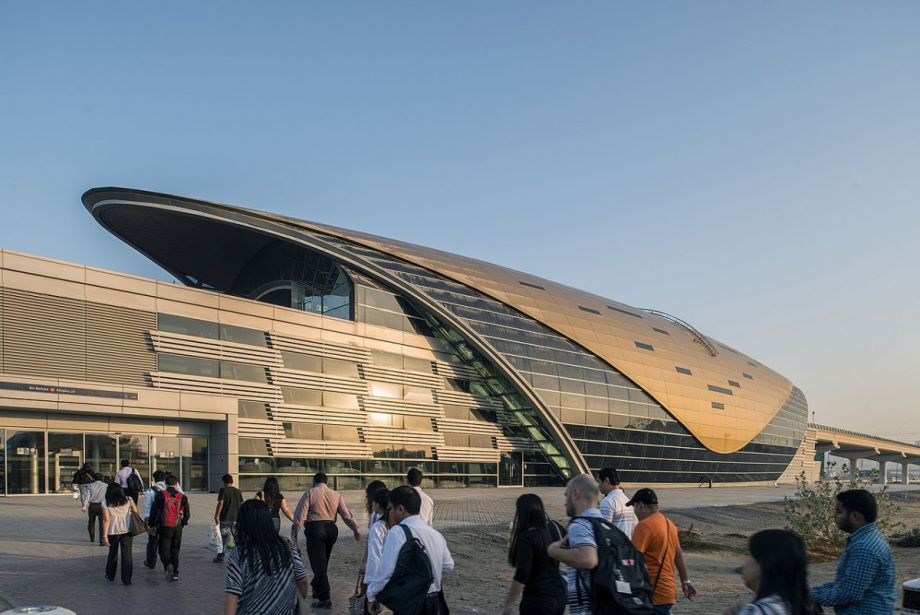 Tunneling Begins on Dubai Metro Extension
On Oct. 24, the “Route 2020” extension of the Dubai Metro began the next phase of its sprint toward completion in time for Expo 2020, when Sheikh Mohammed bin Rashid Al Maktoum officially launched tunneling work on the line’s underground section.

Metro Report International reports that the underground section will consist of two 3.2-km (2-mile) tubes, each 8.8 meters (28.9 feet) in diameter, dug as deep as 36 meters (118.1 feet) underground. The subway will run from Discovery Gardens to the Green Community, with stations in the tunnel at Jumeirah Golf Estates and Dubai Investment Park.

Work on the 11.8-km (7.3-mile) elevated section began in September 2016. Route 2020, an extension of the Dubai Metro Red Line, will run 15 km from Nakheel Harbour & Tower to the Expo 2020 site. The elevated viaduct is scheduled for completion in November 2018, and work on the tunnel should wrap up in December of that year. Passenger service on the line should begin on May 20, 2020, five months before Expo 2020 opens.

First Train Moves Through Crossrail Tunnel
Global Rail News reports that London’s Crossrail project has quietly reached another milestone with the passage of the first train through its tunnels.

According to the report, Crossrail officials announced that the first Elizabeth Line train set has been hauled through the new express subway tunnel under central London and that actual testing of the track and infrastructure will begin soon.

Transport for London placed the first Elizabeth Line train set in service in June on the TfL Rail line between Liverpool Street and Shenfield stations. The TfL Rail service is a precursor to the Elizabeth Line, as Crossrail will be called when it opens for service in December 2018. Additional train sets have been placed in service since the June introduction.

The Bombardier Class A345 Aventra train sets are 200 meters (656.2 feet) long. When the project is finished in 2019, the 10-station Crossrail tunnel should carry 200 million passengers annually and will increase carrying capacity through central London by 10 percent.

Bidders Assure MBTA They Can Bring GLX in Under Budget
Two of the three teams selected to compete for the design-build contract for the MBTA’s Green Line Extension project in Boston have assured the agency that they can complete the extension from Cambridge into Somerville and Medford for no more than the $1.319 billion “affordability limit” set by the agency, Railway Track and Structures reports.

The two teams submitted certifications of affordability required under the MBTA’s final request for proposals for the project. “Certification of the project’s affordability ensures the project proposals are competitive, and that it can be built out with the established budget, and brings the vision of Green Line service one major step forward for our customers,” said MBTA General Manager Luis Manuel Ramírez.

The affordability limit was established after skyrocketing cost estimates nearly caused Massachusetts transportation officials to pull the plug on the long-planned extension. In addition to the cost cap, the final RFP specified a base scope of work along with “additive options” that could be included if they can also be completed on time and within the overall budget. Those options include platform canopies, additional elevators at some stations, public art, extensions and enhancements to pathways leading to some stations, and an enhanced vehicle maintenance facility in Somerville. Whether any of these options will make it into the finished project won’t be known until the MBTA opens the final bids on Nov. 17.