Drought-Prone Cities Get Real With Gray Water – Next City 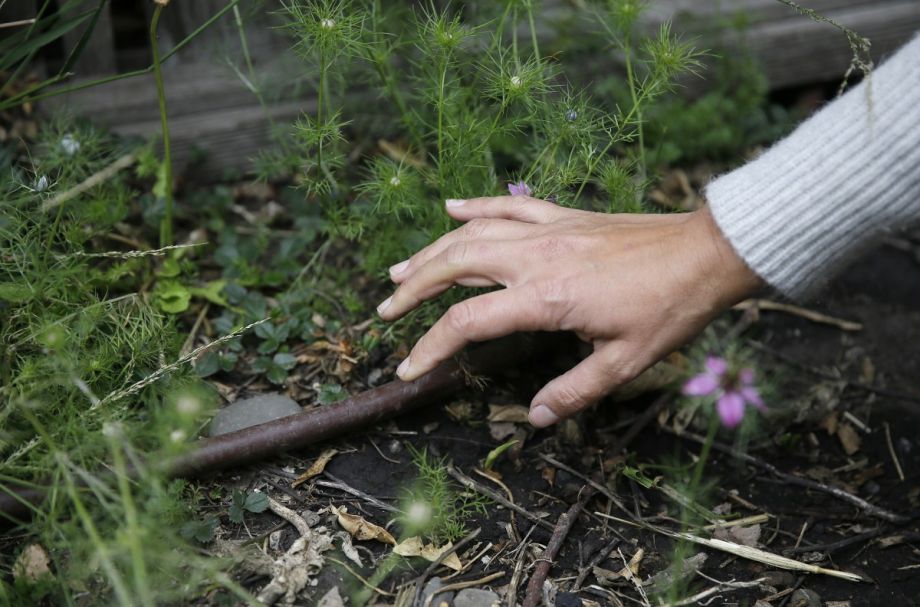 A Berkeley, California, resident shows off an irrigation system using gray water running through the back yard of her home. (AP Photo/Eric Risberg)

Confession: I’m a Californian who likes plants. I want to grow them outside my house in the dirt. I want to water them and watch them grow.

Does this make me a monster? Maybe. I know that while my front yard is made up of natives and veggies, not lawn grass, I’m still part of a pattern in which lower-density cities use more water to keep things green outside. And knowing that has led to my love-hate relationship with the subject of today’s post: gray water.

Perhaps you live in one of those strange and magical places where precipitation still falls from the sky, and don’t yet know about gray water. Gray water is “gently used water from your bathroom sinks, showers, tubs and washing machines,” according to a leading advocacy source, which can be reused for irrigation. It’s a literal bucketful of untapped potential, given that an average shower uses about 17 gallons and washing machines use between 14 and 40 per load. But even though it’s legal in California (it isn’t in every state), a bundle of codes, permits and even the most basic of questions — how to transport it outside — still make gray water a decidedly tricky business.

I speak from experience.

My foray into the murky world of gray water began last March, when my husband, daughter and I moved into a rental with a small front yard. I wanted a garden, but my drought fear was then new and visceral — Northern California wildfires had been off the charts the previous summer, thirsty animals were dying in record numbers as they tried to cross the roads, and even the low-maintenance ivy patches bordering my city’s public buildings had gone crispy and tan.

Still, I planted seedlings in pots, determined to grow them with recycled water. I placed metal bowls under the bathroom faucets and started researching laundry-to-landscape systems.

Quickly, I became overwhelmed by just how much I needed to know about the mechanics of water flow. I’d assumed that the process would be simple: Hook a hose to the back of my washer and drain it into the yard. But my laundry room was downhill from my plants. I didn’t want to build a platform for the washer because the thought of climbing a stepladder every time I needed to do laundry made me want to do that particular chore even less than I already did, so I bought a plastic barrel, constructed a DIY filter, raised the barrel onto a platform, attached a hose to the bottom and then hooked the washer up.

It was both expensive and time-consuming — and although I know now that my city offers a rebate program, I don’t think that system would have been eligible. For starters, we rented and didn’t seek our landlord’s approval (whoops). And that barrel allowed water to pool and sit which, I’ve since learned, is a Gray Water 101 Don’t.

I’ve discontinued that system, and while I plan to build another, I know it won’t be easy. And I have to admit: That experience made me more sympathetic toward skeptical city officials. When I spoke with Joe Flores of Burbank Water and Power for this article on California drought fines several months ago, I asked him about gray water.

“I think there’s kind of a halo effect around it,” he said. “I think a lot of people don’t realize ‘Oh, I have to dig into my walls.’”

But, again, we’re in a legitimate crisis in California. And while limiting large-scale agriculture, tearing out useless lawns and building up instead of out are probably wider-reaching solutions, it’s frustrating, on a personal level, to run my washing machine and think of all that barely used water draining, rushing to my city’s treatment plant, undergoing an energy-intensive purification process and then being pumped back to me — all to be poured out on dirt.

So I’m glad that some cities are trying to incorporate gray water into their roster of solutions. In Encinitas, a suburb of San Diego, the city council recently approved an ordinance stating that all newly constructed homes need to come pre-plumbed for gray water — and that’s huge.

“It doesn’t require that the homeowner capture that water, but it gives them the ability, as opposed to having to cut into their walls,” says Senior Planner Kerry Kusiak.

That mandated pre-plumb is similar to the San Francisco building code requiring that new construction be pre-wired for electric vehicle chargers (which I wrote about here), and it’s a definite innovation — Kusiak says he doesn’t know of any other cities that have passed ordinances applying to an entire home’s infrastructure, though the small city of Chula Vista has a code relating to washing machine hookups.

And according to Laura Allen, co-founder of Greywater Action, other municipalities are also working to encourage water reuse. Santa Rosa, where I live, is notable for its rebate, she writes in an email. The city just translated program documents into Spanish. San Francisco also offers a permit rebate, and Pasadena has recently begun offering free classes and on-site consultations. Outside California, Tucson, Arizona, offers a rebate of up to $1,000 for installing a permanent system.

Because each state’s treatment of gray water varies (and so many people set up unpermitted systems), data is difficult to come by. But Allen says she’s watching interest spike in the West as rain remains elusive.

“Anecdotally, attendance at our workshops is going up, and installers are doing so many systems it’s difficult to keep up,” she says.

Hopefully that increased demand will lead to more city-level policies that allow people like myself to create workable systems without feeling like they need a plumber’s license. For drought-prone areas, gray water is basically a way of having your cake and eating it too — like taking that biweekly five-minute shower and planting a lavender border around the wood chips in your dry front yard.

And these days, that’s pretty much the dream.