Don’t Worry, It’s Fine to Take the Train to the Super Bowl – Next City

Don’t Worry, It’s Fine to Take the Train to the Super Bowl 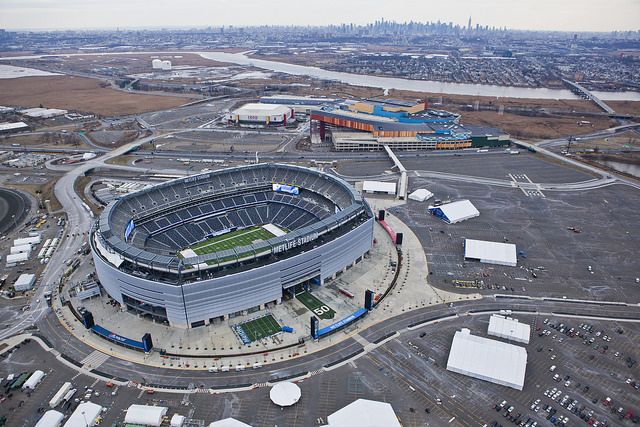 Nothing brings out the doomsday predictions like a big event in an urban setting. Terrorists will strafe and plunder the Winter Olympics in Sochi. Rickety, ill-prepared Rio de Janeiro will resemble Cormac McCarthy’s The Road by the time the World Cup is over. And this weekend in New York, the first mass-transit Super Bowl will lead to a transportation apocalypse on par with a thousand Hurricane Sandys.

It’s true that moving 80,000 fans all at once to a stadium in New Jersey will require a daunting mobilization of the region’s public transportation resources. There’s not a lot of room for error, and if anything goes wrong — as it sometimes does in such a complex system — the Northeast’s next Super Bowl will probably have a C in its Roman numerals.

But the media’s (gleeful?) handwringing over the potential for massive system failure basically boils down to the insinuation that we must be crazy to trust transit to get us to the game. “As ‘mass transit’ Super Bowl nears, more disabled trains and delays,” blared an article in Wednesday’s Star-Ledger. It then ticked off a series of recent troubles on New Jersey Transit, the worst of which was a train stranded for more than three hours, but most of which involved sporadic delays of between 20 and 60 minutes.

A week before that, a reporter for NJ.com demonstrated the perils of relying on fickle public transportation by broadcasting a report about his own train that had broken down in seven-degree weather. And on Monday, ESPN declared that fans should be very uneasy about making it to the game at all if forced to use modes of transport as capricious as buses and trains: “This is the Mass Transit Super Bowl, and that includes Metro-North trains that stopped last week due to an accidentally pulled power cord during the evening rush. Oops! But otherwise, New York is totally on top of it. Forget I mentioned the whole train thing.”

Ah, yes, the whole train thing. Speaking of which, it’s worth noting that trains and buses manage to move, with mind-boggling efficiency, the vast majority of 1.6 million commuters in and out of Manhattan every day. The whole train thing is also wildly underfunded compared to the nation’s highways, runs on infrastructure that’s more than a century old, adheres to a meticulously choreographed dance of departures and arrivals, operates at near-maximum capacity during rush hour, and still works remarkably well — much better, by any mathematical standard, than cars.

It’s also worth noting that the snarky ESPN story ran less than 24 hours before a traffic jam in Atlanta stranded drivers in their cars for an entire night. The “whole car thing” didn’t work out so well then, yet Atlanta has hosted two Super Bowls, and no one has ever suggested that that city was a risky choice because of its reliance on private vehicles. In fact, many of the Super Bowl’s favorite host cities have relatively weak transit systems, forcing attendees to use cars to get to the game, which typically leads to crippling traffic jams. Last year in New Orleans it took drivers several hours to travel just a few miles to the Super Dome. “I think it’s a lot worse than any of us expected,” one attendee told the Times-Picayune at the time.

Despite this, the anxiety swirling around this year’s game ultimately implies that cars are a more reliable way to move huge numbers of people to a fixed point on the map. That this defies logic shows how warped our perception is of driving’s reliability — traffic jams are shrugged off as inevitable, while train delays are seen as signs of a broken system.

Maybe the critics will be right. Maybe transit will fail us this weekend, and the Broncos and Seahawks will play to an empty stadium. Or maybe it won’t, and this will end up as the best free advertising public transportation ever had.