DOJ on Baltimore PD: Discrimination and Disrespect – Next City 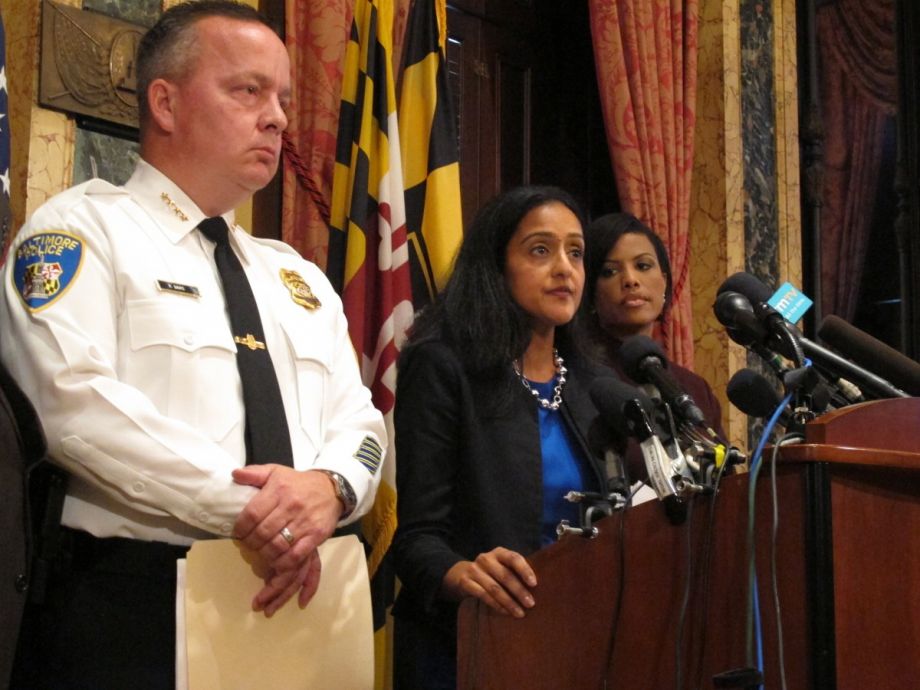 Despite an assertion this week by Baltimore Police Commissioner Kevin Davis that the department’s pattern of civil rights abuses was the work of a few bad apples, a U.S. Department of Justice report released Wednesday paints a damning picture of systemic failures and sanctioned discrimination. The heavily anticipated report is the result of a 14-month investigation into department practices following the death in police custody of Freddie Gray. Its findings are scathing, but not surprising. As Trymaine Lee wrote for MSNBC, the report only reveals what black Baltimore residents have been saying for decades: “The system of policing in the city is rigged against them.”

Between January 2010 and May 2015, the federal investigators found that 300,000 pedestrians were stopped, and less than 4 percent arrested or issued a summons. Encouraged by supervisors to engage in “zero tolerance” policing, officers stopped people for crossing the street in high-crime neighborhoods, for wearing hoodies, for sitting on their own stoops. Police made 520 pedestrian stops for every 1,000 black residents, compared to only 180 stops for every 1,000 residents. One black man in his 50s was stopped 30 times in less than four years.

Black residents are more likely to be searched too, though officers were less likely to find contraband than in searches of white residents. About 44 percent of all stops occurred in two predominantly black neighborhoods containing only 11 percent of the city’s population.

The numbers are shameful, but the specific episodes recounted in the report are painful to read. In one instance, officers stopped a black man for crossing the street in a high-crime area while wearing a hoodie. Despite no evidence he was engaged in anything criminal, the officer explained he thought it was possible “that the individual could be out seeking a victim of opportunity.” The man was stopped, a kitchen knife he was legally carrying was seized, and when he persisted in asking for it back, he was beaten in the face, ribs and back, and eventually shocked with a Taser. Officers handcuffed him and then transported him to the hospital to receive medical care. He was charged with no crime. A sergeant’s report of the incident concluded, “Officers showed great restraint and professionalism.”

Even having a DOJ investigator in the car didn’t stop police from engaging in discriminatory practices. During one ride-along, a BPD sergeant instructed an officer to question a group of young black men on a street corner and order them to disperse. When the officer protested he had no reason to stop them, the sergeant replied, “Then make something up.”

The report also details a template given by a shift commander to a sergeant and a patrol officer for reporting the arrest of someone standing near public housing without a “valid reason.” The DOJ wrote, a “facially unconstitutional detention,” and continued, “Equally troubling is the fact that the template contains blanks to be filled in for details of the arrest, including the arrest data and location and the suspect’s name and address, but does not include a prompt to fill in the race or gender of the arrestee. Rather, the words ‘black male’ are automatically included in the description of the arrest.”

The report makes clear there’s a culture of discrimination and disrespect, from the bottom to the top: supervisors, officers, prosecutors, bad policies, lackluster investigations.

“We found that BPD has engaged in a pattern or practice of serious violations of the U.S. Constitution and federal law that has disproportionately harmed Baltimore’s African-American community and eroded the public’s trust in the police,” said Vanita Gupta, head of the DOJ’s Civil Rights Division, at a press conference Wednesday.

Mayor Stephanie Rawlings-Blake spoke too, saying the city has “a very long journey ahead” to right these wrongs. As a result of the investigation, the city and Justice Department have agreed to negotiate a court-ordered consent decree that will lay out steps to reform, including better training, supervision, data collection and analysis. The city has already announced an overhaul of its use of force policy. Cleveland and Ferguson, Missouri, are currently under consent decrees after DOJ investigations in those cities too. The department is currently investigating civil rights abuses by Chicago’s police department.

Rawlings-Blake requested the DOJ investigation after the death of Freddie Gray as he was being transported, unsecured, in a police van. But on Wednesday she said the findings “have nothing to do with Freddie Gray.” That came as a shock to some, given that the report states that the BPD practice of “routinely fail[ing] to safely secure arrestees in transport vans with seatbelts” puts detainees “at significant risk of harm.” And the “crime” that got Gray detained in the first place? He made eye contact with a police officer, and then ran.