Does New York Know It Has a Transit Cost Problem? – Next City

Does New York Know It Has a Transit Cost Problem? 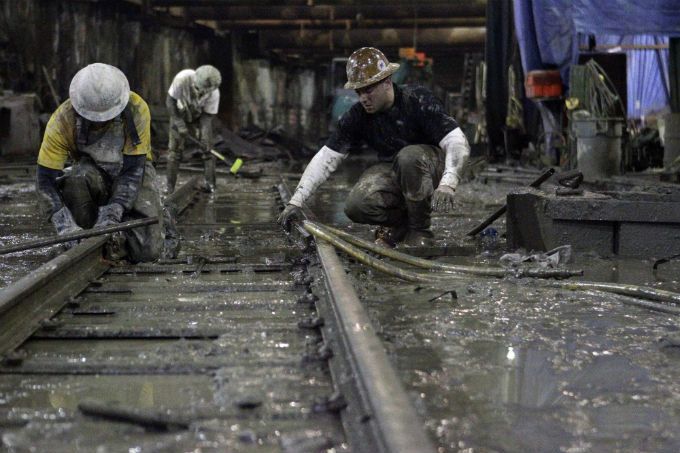 The first step to recovery, so the saying goes, is admitting you have a problem.

New York City transit has a dire cost problem. After decades of stasis and road-building after World War II, the nation’s largest city came roaring back to life in the 1990s. It quickly realized that with urban decline coming to an end, so must end its transit-building dry spell. As a result, four Manhattan megaprojects were funded: The first phase of the Second Avenue subway on the Upper East Side, a new Long Island Rail Road terminal called “East Side Access,” the 7 train extension to Hudson Yards, and a renovation of Fulton Street subway stations in the Financial District.

These projects are in various stages of completion, but all have one thing in common: A crippling inability to control costs. Each was far more expensive than any comparable project abroad — more than twice as expensive at the very least, and in many cases far more — and each would have set world records if the others hadn’t already. (Fulton Center, at $1.4 billion, avoided becoming the most expensive subway station on earth only because the World Trade Center PATH station next door took that crown. The 7 train extension won’t become the world’s most expensive subway on a per-mile basis only because that honor belongs to the Second Avenue subway.)

Subway tunnels in other dense, first-world cities can vary widely in cost, but almost always clock in at between $200 million and $1 billion per mile of route. The Second Avenue subway is costing New Yorkers around $2.3 billion per mile, not adjusting for inflation, and the 7 train extension has a similar price tag. Fulton Center and East Side Access are a bit tougher to compare, but suffice it to say that their costs (and, in the case of East Side Access, its very design) have no precedent anywhere on this planet.

To the Metropolitan Transportation Authority, however, barely any problem seems to exist at all. Michael Horodniceanu, who leads the construction of these four megaprojects as president of the MTA’s Capital Construction Company, said as much during a Wednesday talk on the 7 train extension and Fulton Center, hosted by the Transit Museum.

At around the midpoint of the Q&A segment, Michael Grynbaum, once the New York Times’ transportation reporter, raised the billion-dollar question: “Put bluntly, why do these projects cost so much?”

Horodniceanu gave a number of answers throughout the evening. He blamed, for example, the byzantine work rules that construction unions have negotiated for themselves — something nobody with a passing familiarity of the work rules that MTA management toils under on the operations side would doubt. One reporter with TunnelTalk visited the East Side Access tunnels and came away with the impression that the sandhogs “worked for the Union rather than the contractor.”

Horodniceanu also blamed New Yorkers’ intolerant attitudes toward disruption at the surface, which has certainly been a problem in the past, even in unpopulated Central Park.

But many of his answers were not so credible, and left me with the distinct impression that not only does the MTA misunderstand why its projects are so expensive, but that the agency doesn’t even necessarily see the high costs as a problem that needs fixing in the first place.

“Do you think that it’s a problem?” I asked Horodniceanu of the high costs, after his talk was over.

“Is it a problem?” he replied. “Is it a problem that an apartment in New York costs a lot of money?” It was the same answer he gave Grynbaum when on stage.

Consider this: Hong Kong has by some measures the most expensive housing market in the world, but even that city can build a mile of subway for less than half of what New York pays. Aboveground construction costs in New York are, in fact, fairly similar to those in its peer first-world megacities. Why should below-ground costs be any different?

Horodniceanu seemed skeptical of the figures I threw at him about subway construction in other cities, apparently in disbelief that Paris, for example, can build subways for 80 percent less than New York’s per-route-mile costs. “I wouldn’t be — I would not say that in France underground work is cheap,” he said.

On to Hordoniceanu’s next point: “We are in a densely populated area that has 100,000 [people] per square mile.”

True, the Upper East Side is very dense. But he negated this argument almost immediately by noting that the 7 extension was not in a particularly dense part of the city. (In fact, the area around the future station at 34th Street and 11th Avenue is virtually devoid of any development at all.) Horodniceanu pointed out that this project wasn’t as pricey on a per-mile basis as the Second Avenue line on the Upper East Side, but the two were not far off in cost, and the 7 train is still several times more expensive than comparable lines abroad. Urban density is clearly not what drives the majority of the cost gap.

Will the second phase of the Second Avenue line — which extends north up 125th Street to East Harlem, and includes substantial segments that were completed in the 1970s — be any cheaper than the first phase?

“No,” Horodniceanu said. “It’s going to be similar because of the length of it.”

A conceptual plan released by the MTA in 2002 showed that the entire second phase would be built using a cheaper (but more disruptive) cut-and-cover method. Hordoniceanu, though, said that the current plan is to bore about 1,500 feet of tunnel using the same sort of machines that dug the first phase.

Higher up at the MTA, there seems to be the same shoulder-shrugging attitude toward costs. Last April I put the same question to Tom Prendergast, whom New York Gov. Andrew Cuomo had just chosen to head the MTA: Are the city’s high subway construction costs a problem?

“When I started in the industry back in 1974,” he said at the time, “the rules of thumb were $100 a mile aboveground, $100 million below ground.” (That latter figure comes out to $500 million adjusted for inflation — about a third what New York actually pays now.) “Obviously we’re at a very different place,” he said. “The cost of construction is what the cost of construction is.”

Not everyone is so nonchalant in the face of the MTA’s jaw-dropping costs. “We cannot build a 21st-century city and compete globally if we continue to spend five, even seven times as much on construction projects as compared to our competitors,” said Scott Stringer, then Manhattan borough president and now city comptroller, at a transportation conference in 2011. “There’s almost this sense that we can’t get it done any other way,” he said of New York’s perennially delayed and over-budget transit projects. “We cannot allow that to be the case, or we’re never going to be able to build out the city.”

While politicians like Stringer can raise a stink about MTA practices, they ultimately have very little control over the state-run agency. Until the MTA — or, more realistically, the governor who calls the shots — at least acknowledges its crushing cost problem, New York is likely doomed to price tags that make anything beyond the most basic of projects little more than a pipe dream.