Does Europe Build Streetcars? Not Quite – Next City

Does Europe Build Streetcars? Not Quite 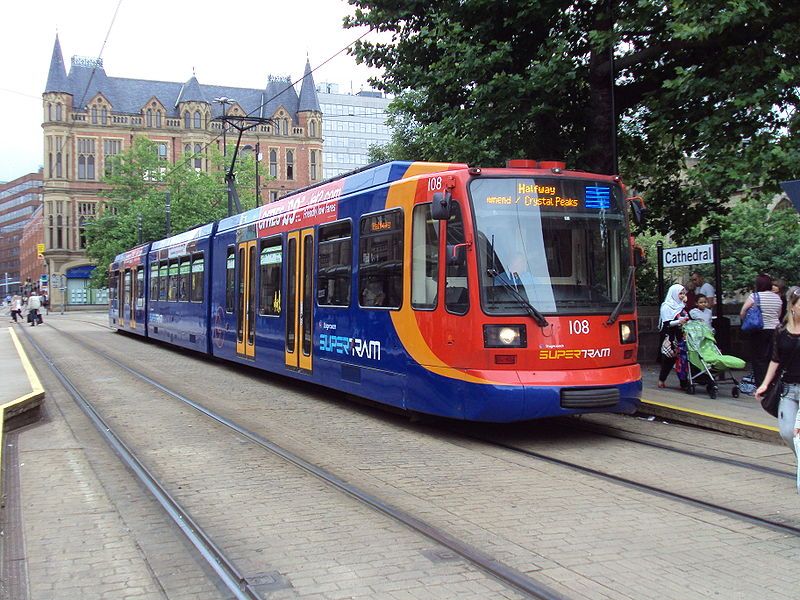 Sheffield’s Supertram, in a part of the city center that was pedestrianized to make way. Credit: Green Lane on Wikipedia

There was a time when American passenger railroads were the envy of the world. From New York’s subway network to diesel-powered high-speed trains that peaked at 115 miles per hour in the 1930s, the U.S. gave birth to a number of major transit innovations.

But that was then. Now, it’s all a game of catch-up. So, I have a rule of thumb when it comes to American transit: don’t innovate. If you think you’ve found a clever way of doing something that’s different from how it’s done abroad — a new signaling system, say, or unique crash safety regulations — it’s probably not all it’s cracked up to be. If you think there’s something totally different about your situation where European or East Asian design principles don’t apply, you’re probably wrong.

Modern American streetcars break this rule. While they use the same vehicles as European trams, which are spreading like weeds across the western half of the continent, they are much different from their European counterparts. Or, put another way, Europeans don’t build new streetcar lines.

The line between streetcars and light rail (one that Europe skirts completely with the word “tram”) is a fuzzy one, but the most common distinction is in the right-of-way. Light rail has the majority of its route to itself, either in the street but segregated by concrete or paint from other traffic, or off to the side in a separate trackbed. Streetcars, on the other hand, mix with traffic along their entire route. Essentially, they’re local buses affixed to tracks. Light rail requires space and moves quickly, while streetcars ask no sacrifice on the part of drivers but travel slower.

I wrote the other day on Twitter that the rest of the world does not build new “primarily mixed-traffic streetcars”— that while there are many old ones still around, the U.S. is the only country to build new ones. In response, Dan Malouff wrote a blog post at Greater Greater Washington calling my assertion into question.

“In an attempt to discredit the concept of streetcars, some opponents,” he wrote, linking to my tweet, “erroneously claim that other first-world countries don’t build mixed-traffic rail. So let’s set the record straight: Yes they do. Plenty.”

Not only does the Midland Metro barely run in mixed traffic, but it mostly doesn’t even run in the street. Credit: G-Man on Wikipedia

He then goes on to list a number of European tram lines with some mixed-traffic segments: Lines in France’s Tours and Le Mans, the U.K.‘s Manchester, Nottingham, London, West Midlands and Sheffield, and Dublin, Ireland.

I’m sure his list is not comprehensive of all trams in Europe with mixed-traffic segments, but I think it more proves my point than his: Europe does not build primarily mixed-traffic streetcars. While the lines Malouff mentioned do at times travel in lanes with cars, these segments are, with one exception, very short. In fact, his list provides a nice account of the differences between trams in Europe and streetcars in the U.S.

In Tours, the first city Malouff cites, the tram was given its own right-of-way for nearly its entire length, even when it meant making the oldest bridge in the city one-way for cars. Only on a main commercial street, with just three lanes, does it share the road with cars, and for a very short distance — what appears to be less than half a mile. Even here, the tracks are both off to one side, so that with a little bit of paint and a few signs, the lanes could be dedicated to trams.

Compare that to D.C., where the streetcar will run along the curb on H Street, making it impossible to convert to light rail standards.

Malouff’s other examples are similar. None of them are totally mixed-traffic, and all but one city’s trams — Sheffield’s, the oldest on the list — run in dedicated rights-of-way for the majority of their lengths.

The tram in Le Mans is typical of new European lines, in that it only runs in mixed traffic for this short, half-mile segment of its route. Credit: Wikipedia

In Dublin, the Red Line travels in traffic on the three-lane Chancery Street, but on other three-lane streets it gets two dedicated lanes. Along its length of more than 13 miles, only a tiny segment is mixed with general traffic. The tram in Le Mans is similar, only mixing with traffic for about half a mile in a two-lane street.

Nottingham’s tram runs in the street for a bit longer, though still nowhere near the majority of its length. One of its mixed-traffic segments is in a very tight part of the millennium-old city center, where dedicated lanes wouldn’t have been possible without banishing cars completely (which is, in fact, done for some stretches of the tram line).

The Midland Metro, which originates in Birmingham and travels through the West Midlands to the oh-so-Englishly named Wolverhampton, travels almost entirely in the trackbed of an old Great Western Railway line, segregated from traffic. Toward its northern terminus, it leaves its dedicated right-of-way and enters the street, but only shares lanes with general traffic for a few hundred feet at a time. At other times, it shares a lane with buses.

London’s Tramlink network, centered in the Borough of Croydon, shares lanes with traffic in some longer on-street segments, but many of these streets are extremely narrow (just one lane at times) and parts were pedestrianized. Most of the network’s lines run along either old or new dedicated rail rights-of-way, not with mixed traffic.

In Manchester, the tram comes closer to a mixed-traffic streetcar, though it still doesn’t appear to run in the street for most of its length.

Sheffield’s Supertram is the only new surface rail line in Europe I could find that runs primarily in mixed traffic. Credit: Allan Murray-Rust

Which brings us to the Sheffield “Supertram,” the only line on Dan’s list that actually runs primarily in mixed traffic. It still, however, moves into its own lanes or to the side of the road on a traditionally railway bed at times — including downtown, where cars were banned entirely from some streets to make room for transit — making it faster than a traditional bus.

Built in 1994, the Supertram is the oldest on this list, and was one of the earliest of the modern European trams. Twenty years later, it seems that even Sheffield’s transit planners have stepped into line with best practices: Planned extensions of the network will run along existing railways, not in mixed traffic like the original lines.

In the U.S., though, no attempt has been made to give streetcars dedicated lanes, even on wide streets. In Washington, D.C., for example, the H Street streetcar will run in mixed traffic along its whole length when it opens this year. This lack of dedicated space comes despite the fact that H Street has six lanes of traffic and parking – it could have given two over to transit and still had enough room for one lane for traffic and one for parking in each direction. (Unlike in Sheffield, U.S. agencies don’t seem to learn: Seattle’s First Hill line will be its second mixed-traffic streetcar route.)

In Cincinnati, the streetcar will run in four-lane, one-way streets. Downtown, the sidewalks are already quite generous. These are massive rights-of-way, and in Europe one of these streets would likely have been given a two-way tramway to avoid the problems one-way transit splits. But in Cincinnati, no space was dedicated to transit (Correction: As commenter John Yung points out, the Cincinnati streetcar will in fact have a very short dedicated segment – for five blocks on its southbound segment, it will run in the median of the very wide Central Parkway) and the one-way streets were left in place. There was an incredible outpouring of support for Cincinnati’s streetcar, enough to save it from multiple attempts on its life over the years. But there was not enough support for the street space changes that would have made the streetcar faster than a bus. (Or, if their streetcar turns out to be as slow as Portland’s, faster even than walking.)

The same is true in Tucson and and Atlanta, which also plan on opening streetcars in 2014. As far as I can tell, none have any segments that will run on streets with fewer than four lanes. Even under the most generous circumstances, U.S. cities have failed to allocate any street space to transit beyond a few dozen feet here and there for stations.

Streetcar backers will explain away the lack of mobility by saying their lines are more for economic development than transportation, but all the new lines claim to be just the first phase of full-blown transit networks. The lines aren’t just “pedestrian accelerators,” as they’re sometimes called, moving people a mile or two through downtown. Each city now building a streetcar says it wants them to eventually serve as trunk lines for a future network. But when you have a slow core with winding, inefficient routes, it limits the distance that you can extend the network before travel times become too long and schedules are unmanageable because of traffic.

Another difference between American streetcars and European trams is in length as built. Even Sheffield’s line, clogged by traffic for more of its length than any other line, runs for 18 miles. France’s trams are often a bit shorter, but never as short as lines in American cities. Atlanta’s line runs for just 1.3 miles, Cincinnati’s 1.8 miles, Seattle’s next line 2.5 miles and Tucson’s nearly four.

The debate over mixed-traffic streetcars will no doubt rage on, but the question of the mode’s uniqueness should be settled. Primarily mixed-traffic modern streetcars are a thoroughly American invention, with no analogs abroad. European trams may look like streetcars for a few hundred feet here or an odd mile or two there, but they’re more light rail than anything else.