Do Bus Rapid Transit Right, And It Won’t Get Killed – Next City

Do Bus Rapid Transit Right, And It Won’t Get Killed 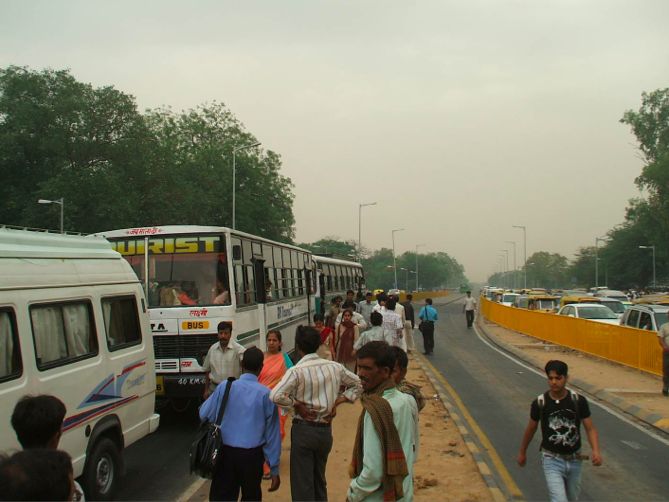 The growth in popularity of bus rapid transit (BRT) in the U.S. is providing American cities with an important public transit option that has already been shown to reduce congestion and improve quality of life for urban residents around the world. As new BRT systems are planned, however, it is increasingly important that they meet the emerging industry-standard definition of what constitutes true BRT.

Such a standard will guard against the missteps described in a post last week by Dan Malouff, which detailed two failed attempts at quasi-BRT systems in the U.S. and India.

Earlier this year, the Institute for Transportation and Development Policy, together with many of the world’s leading BRT experts, introduced The BRT Standard: Version 1.0, currently in its pilot year and set for wide distribution in 2013. As the metrics of this scoring system demonstrate, the two examples Malouff cites are very clearly not best practices — nor are they even BRT.

The bus system in Delhi, India, for example, scores a 22 (out of 100) and falls well below what is required for a system to be considered BRT. Stations, placed at intersections, leave insufficient space for free left turns (the equivalent of free right turns in the U.S.), and left-turning vehicles yielding to pedestrians back up traffic. In addition, failing to eliminate turns across the busway significantly slows both bus and car traffic, and fares are collected onboard the bus, which slows boarding times. There is no off-board fare collection, a key aspect of BRT. The system also allows non-BRT buses into the bus lane, so there is no consistency in at-level boarding — which doesn’t require passengers to step up to board and is a critical element to a smooth BRT experience.

All of these issues reduce overall bus speeds on the corridor, thereby reducing passenger comfort. Finally, stations are not of a particularly high quality and are generally poorly maintained. No wonder the city’s high court is considering opening these bus lanes up to car traffic.

Virginia’s Shirley Highway Busway, while once a well-functioning bus lane on a highway, lacked many of the quality-of-service features necessary to make it a world-class BRT system. There were no permanent stations and no off-board fare collection. As its conduit was a highway lane, it was never integrated with bicycling and walking infrastructure. In addition, the frequency of buses was too low, leading to the none-too-rare sight of an empty lane flanking a congested highway. The state has since reduced restrictions on cars allowed in the bus lane, and will soon even permit single-occupant vehicles to use it.

The reality is that dismantling a BRT system only happens when the quality of the system is already too low for it to be viewed as a permanent part of the city’s infrastructure. Cleveland’s HealthLine BRT corridor, which features high-quality stations, off-board fare collection, median-aligned dedicated bus lanes and at-level boarding, is a leading example in the U.S. of a world-class BRT project. The HealthLine joins the ranks of other internationally recognized leaders such as Ahmedabad’s Janmarg in India, Johannesburg’s Rea Vaya in South Africa and the Guangzhou BRT in China.

Such systems have never been, nor are they likely to be, dismantled with the stroke of a pen. They continue to be trusted to maintain their exclusive lanes, and to remain a permanent part of the urban form in their respective home cities.

Annie Weinstock is the U.S. Country Director for the Institute for Transportation and Development Policy.