Do Bloomberg’s Would-Be Successors Think Atlantic Yards Was a Good Idea? – Next City 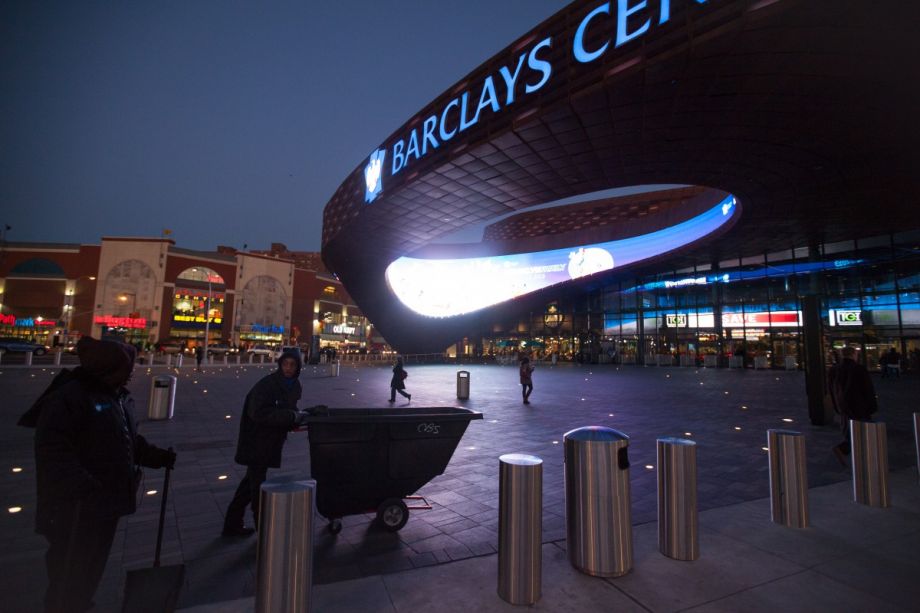 Last week the nation’s newest pro-basketball arena, the Barclays Center, played host to New York City Mayor Michael Bloomberg’s final State of the City speech. It was a spectacle that the Daily News aptly described as a pep-rally.

Spectators were seated in a high-ceilinged vestibule and had an impressive view into the arena’s bowl, cavernous and dark. The podium sat on a stage set a few feet above floor level, just before the empty basketball court, while the bright scoreboard loomed behind.

To start things off, Brooklyn Nets cheerleaders assembled on stage and danced to a remix of Aretha Franklin’s “Respect,” followed by a group of children dancers, this time posturing to a mash up of “Ice Ice Baby” and “Can’t Touch This.”

A few minutes later, after an introduction by Brooklyn Borough President Marty Markowitz, Bloomberg himself emerged. It was a surreal moment: A man bizarrely dressed in knight’s armor waved an enormous city flag — at least as tall as the mayor himself — as spotlights streaked across the arena floor. An edited and looped version of “Empire State of Mind” boomed out of the sound system.

Clearly this was a celebration, with Bloomberg as the city’s champion. Pennants hung form the ceiling heralding his achievements: “RECORD HIGH LIFE EXPECTANCY” and “52M RECORD VISITORS in 2012,” for example.

Bloomberg went on to talk about his administration’s successes. But it was his development agenda in which he seemed to take special pleasure. Calling out the “naysayers and NIMBYers,” referring to the battles his administration fought over large-scale development projects, the mayor boasted, “Over the past 11 years, we have beaten the odds, and the obstructionists, over and over again.”

To Bloomberg, the venue may have represented the culmination of his ambitious development agenda. But like Atlantic Yards, that agenda remains unfinished.

Bloomberg was a supporter of developer Forest City Ratner’s vision for Atlantic Yards from day one, though state agencies were primarily responsible for facilitating the deal. Still, the city contributed $205 million in capital improvements to the site, a significant amount of taxpayer dollars.

To critics of Bloomberg’s pro-development agenda, the mayor’s choice of the Barclays Center for his final State of the City was bitterly appropriate — it represented an administration that gave deals to a select group of developers on projects that brought few public benefits.

Among the mayor’s likely critics, however, some have chosen to remain quiet. Several Democratic mayoral candidates, otherwise seeking any way to differentiate themselves from Bloomberg, gave the mayor a pass on Atlantic Yards.

Public Advocate Bill de Blasio, currently polling in third place for the Democratic mayoral nomination, issued a statement later that day, which said of Bloomberg’s spectacle, “I’m a little sick of this way of thinking about the world.” But de Blasio didn’t take the opportunity to take a jab at the mayor over Atlantic Yards, or the promises that have failed to materialize there.

De Blasio was a prominent supporter of Atlantic Yards while he was a city councilmember for Park Slope, one of the neighborhoods bordering the development site. In particular, de Blasio based his support on the inclusion of a Community Benefits Agreement (CBA), signed by the developer Forest City and eight community groups, that ostensibly represent the surrounding communities. This agreement was the first of its kind in New York City, though similar arrangements had been used elsewhere.

In 2006, de Blasio called the CBA “historic” and said, “I think it sets a model that I hope will be followed throughout New York City going forward.”

However, some have roundly criticized the Atlantic Yards CBA, questioning whether the local community was legitimately represented. Only eight organizations were party to the agreement, some of which received significant financial support from Forest City. Promises for an Independent Compliance Monitor have gone unfulfilled. Apprenticeship programs have failed and languished.

But as recently as 2011, de Blasio repeated his support for the project, this time focusing on promises of job creation and affordable housing. At the same time, de Blasio recognized that enforcement of the CBA’s provisions remains an issue. “I think we all have to create much more transparency and much more enforcement on CBAs,” he said.

Yet in his three years as public advocate, de Blasio has released statements on subjects like the conflict in Israel, but nothing on the lack of enforcement of the Atlantic Yards CBA or its unfulfilled promises. If de Blasio has a different vision for development than Bloomberg, he has yet to articulate it.

De Blasio isn’t the only Democratic mayoral contender to support Atlantic Yards, either explicitly or implicitly. Christine Quinn, leading the pack of Democratic candidates, never spoke out against Atlantic Yards as speaker of the City Council (though she did have some tougher words for the project when she was just a rank-and-file councilmember). She also declined to hold a City Council hearing on the subject, which Norman Oder of the Atlantic Yards Report regards as tacit support.

“She never took a public position and wasn’t an active supporter, but that equated essentially to support, especially since she’s never green-lighted an oversight hearing,” Oder told Capital New York this month.

Bill Thompson, who was the city’s comptroller at the time the Atlantic Yards CBA was signed, has also supported the project in the past. “The attraction of Atlantic Yards, at least for me, was the affordable units, which were substantial, as well as the Community Benefits Agreement,” Thompson said in 2009.

Thompson has offered one way he would do development differently if elected mayor: Enlisting multiple developers at large sites, rather than depending on single one. Thompson proffered Battery Park City as a model. But Thompson seem more concerned about ensuring development moves forward than the delivery of community benefits, telling the Observer, “If you look at models that have worked in good and bad economies, look at Battery Park City… you’ve seen building and construction moving forward and developing in good and bad times.”

Still, Thompson has acknowledged the problems of community representation in relation to CBAs, saying, “I think that there should be a template the city uses, with each project, that goes into each development.”

The candidate with the most substantive criticism of development under Bloomberg is John Liu, the city’s comptroller. In 2011 Liu’s office convened a task force to study the community benefits process. It issued a report with several common-sense reforms that were intended to improve the process for both developers — who face uncertainty and delay during this process — and community groups that need better representation and enforcement. Liu’s reforms would make CBAs legally binding and give oversight to the comptroller’s office.

Otherwise, Liu has proposed doing away with deals like Atlantic Yards altogether. In his own State of the City speech, he called for “eliminating the tax breaks and corporate welfare handed out to big companies,” though many of these tax breaks are encoded in state law.

Back at the Barclays Center last week, Bloomberg warned that new projects might grind to a halt once he leaves office. But given the views of the Democratic front-runners for mayor, any scenario in which development interests don’t continue to hold sway seems unlikely.