How Uber Got Legal in Time for the DNC – Next City

How Uber Got Legal in Time for the DNC 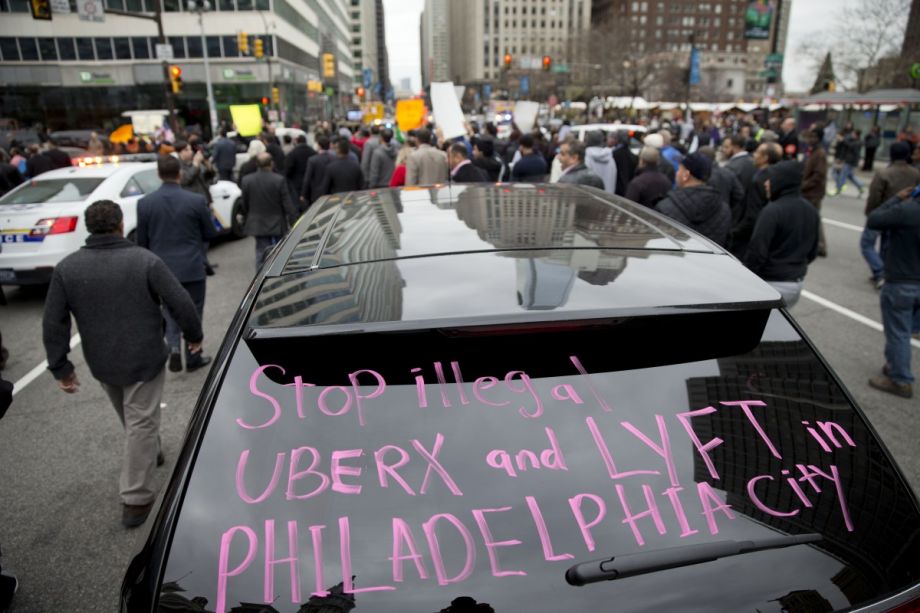 With the Democratic National Convention in town, one might think Philadelphia’s transportation system would exemplify worker protections on which Democrats run their campaigns. Instead, the influx of high-power visitors spurred the Philadelphia Parking Authority (PPA) to declare an emergency worthy of subverting the democratic process.

On July 7, 2016, after Philadelphia’s public transportation authority had to decommission a third of its regional rail fleet for repairs, the PPA announced a deal with its long-time foe. The details of the agreement are secret, part of a settlement for Uber’s years of illegal operations in Philadelphia, but the upshot is that the PPA will “suspend enforcement against UberX drivers until September 30.” The hope is that by then state legislators will have come to an agreement on how to regulate the on-demand giant. In a press release by the PPA, the city’s 1.5 million residents were told the answer to their transportation woes was the lawsuit-embroiled Uber. “Working with Uber and the city of Philadelphia, the PPA will do all we can to help city residents and visitors alike, navigate the obstacles posed by the current SEPTA rail service disruption. We will do all we can to ensure that visitors to the upcoming Democratic National Convention have as many transportation options as possible, including ride-sharing,” said PPA Executive Director Vince Fenerty in the statement.

What’s the problem with including Uber as part of a modern city’s transportation solutions? Theoretically, nothing. Many Philadelphians enjoy the freedom of occasional work, and many more enjoy the low-cost option for point-to-point rides. But the major shift in transportation options has left Fair Ride Philly, our coalition of disability advocacy groups and taxi, Uber and Lyft drivers, with a few difficult questions.

What if I don’t have a smartphone or a credit card?
If you are like the 26 percent of Philadelphia’s residents who live below the poverty level, the PPA thinks that transportation solutions need not apply to you. You cannot use Uber without a smartphone and a credit card.

What if I use a wheelchair?
The PPA had agreed, after years of lobbying by the disability community, to work towards a fully wheelchair accessible fleet of taxis. However, once Uber flooded the markets, those efforts evaporated as the cab industry has been undermined and no one will make the investment to replace their vehicles. Uber says that it is not responsible for complying with the Americans with Disabilities Act because their drivers are not employees, a premise that is being disputed in courts across the world. Uber has created UberWAV (Wheelchair Accessible Vehicle). Unfortunately, there are likely only two of them for Philadelphia’s thousands of residents with disabilities.

What if my family and small business rely on me making a living wage as a driver?
You jumped through the PPA’s bureaucratic hoops to become a background-checked, insured, vehicle-inspected driver. Maybe you even forked over hundreds of thousands of dollars that you borrowed so that you could buy a PPA taxi medallion. You expected the PPA to protect you from exploitation by multi-billion dollar corporations like Uber and be able to make at least a living wage. Unfortunately, with pressure from the Democratic Party, the PPA thinks that free or cheap rides for Democratic National Convention visitors are more important than your rights as a worker. Besides, you’re just a contractor, not an employee, according to Uber and the PPA. Never mind that Uber can deactivate you at any time or control what is charged for each trip.

How are decisions around our transportation system being made?
Decisions about the future of our transportation system have been made without us. It is alarming when an enforcement agency like the PPA creates laws in backroom deals as it did in its deal with Uber. What guarantees do we have to democratic representation and that enforcement agencies, such as the PPA or the police department, don’t prioritize other interests — in the case of Uber, interests valued at nearly $70 billion dollars?

In response to a petition by the Fair Ride Philly Coalition, Judge Linda Carpenter asserted our rights to have our laws determined by our elected officials and ordered a stay on the PPA’s deal with Uber in which the PPA accepted a mere $350,000 settlement for the $1 million or more owed for Uber’s illegal operations. In exchange for the closed-door deal, the PPA guaranteed that Uber would be allowed to operate above the law. In addition, that $350,000 is only paid once the state legislature passes a transportation bill to Uber’s satisfaction. In other words, if Philadelphia were to decide that a company that profits off our poverty by offering sub-par wages and shirking employer responsibilities is not welcome, we would not receive a dime of what we are owed for their illegal operations.

Judge Carpenter’s ruling was initially hailed as a win by The Fair Ride Philly Coalition, comprised of people with disabilities, Uber drivers and owner-operator taxi drivers, but the influence of corporate interests is far reaching. Less than 24 hours later, the Pennsylvania legislature snuck expanded rights for the PPA into a fiscal code in an attempt to retroactively legalize their actions.

Yesterday, the Fair Ride Philly Coalition rallied out front of the PPA’s board meeting and at the DNC venue to demand that the Parking Authority guarantee:

They heard our voice. Now will the many Democrats, progressives and activists visiting Philadelphia stand with us to demand the PPA act?

Angela Vogel is a community organizer and strategist who has worked on winning campaigns for workers’ rights, environmental justice, and women’s rights.