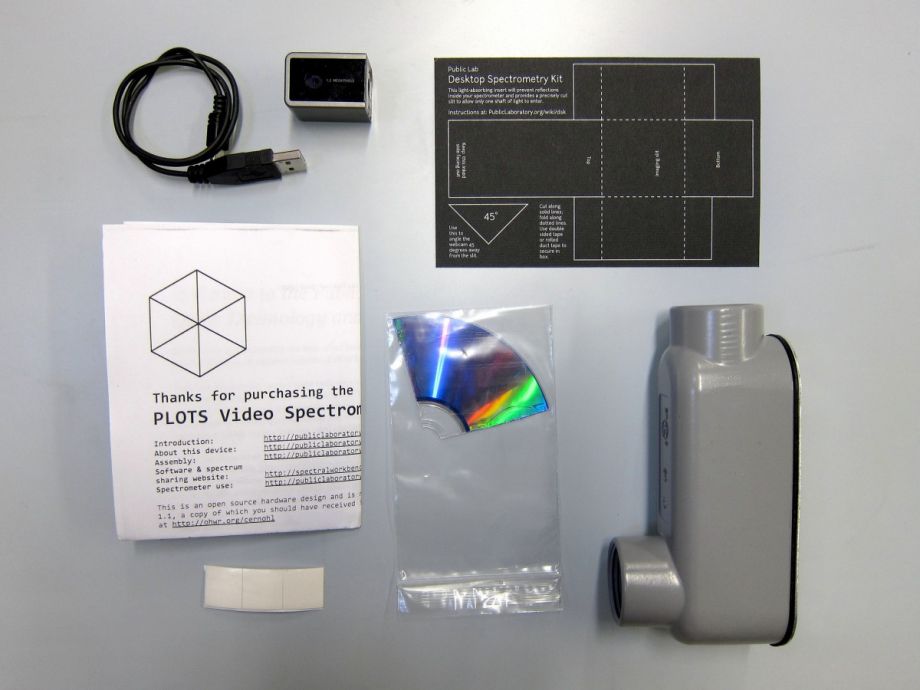 The do-it-yourself science outfit Public Laboratory for Open Technology and Science has announced the Spectral Challenge, a contest to equip citizen scientists with cheap, easy, open-sourced tools for differentiating between substances in their environment. It’s an extension of a growing civic science movement that can help ordinary people better understand and improve conditions in communities across the country.

Public Lab grew out of a project that used balloon-borne cameras to map the effect of the 2010 Deepwater Horizon oil leak on the Gulf Coast. The Spectral Challenge’s next goal is to refine tools capable of figuring out whether what’s lapping up on the coast is crude oil or just very dark mud. Think of hoped-for experience, they say, as that of a sort of Shazam for the material world.

One way of differing mud from oil, explains Stewart Long, a geographer with Public Lab, is through spectrometry, the science of which is fairly simple. Light passes through a diffracting agent and the material under investigation. The wavelengths are refracted to different degrees depending on the nature of that material, creating a spectrum that can be graphed.

But simple or no, spectrometry in the real world has traditionally been expensive and complicated, something ExxonMobil does, not Mrs. Smith’s high school science class. The Spectral Challenge, thus, has two parts. Stage one is won by documenting some procedure for improving the state of DIY spectrometry, such as coming up with ways to make the use of cheap spectrometers capable of producing higher quality or more replicable results. That phase ends May 31 with a $1,000 prize for the winning team.

Stage Two starts shortly after, and while many of the details are still in the works, the ultimate goal is to demonstrate a real-world success in identifying environmental contaminants. A la the X Prize, that could take months or years. At a fundamental level, the goal is to use networked science to improve networked science, and thus you’re more likely to win the prize money — 80 percent of a crowdsourced pool that stands, in the early going, at $751 — if you publish your progress early and often, and work as part of a collaborative team.

In the Victorian era especially, science was considered a proper pursuit for all sorts of amateurs. If in more modern times it has largely become the stuff of advanced degrees, the tide seems to be turning — especially with the rise of cheap, enormously powerful technologies in the hands of everybody, like digital cameras, multi-functioned cell phones and open-source platforms (including SpectralWorkbench, the software tool set and sharing space created by Public Lab).

Indeed, Public Lab has worked up directions for making your own spectrometer using whatever camera you might have hanging around and a DVD slice as a diffraction grating.

But just because anyone can build a home spectrometer with an old yoga DVD and a piece of cardboard doesn’t mean that they will. To boost adoption, Long says, Public Lab started offering kits, which have proven popular. For $40 and a commitment of about a half-hour of build time, you get a pre-cut DVD slice to use as a diffraction grating, black card paper for the creation of an aperture, and an aluminum case. The resulting device connects to your computer via USB cable.

Or, for $10, you can get a Foldable Mini-Spectrometer. “Just add glue or tape!,” the website instructs, to attach to your cell phone what ends up looking like a box trap for mice. There are, Long reports, some 1,050 Public Lab D.I.Y. spectrometers now “out in the wild.”

Public Lab wants to get hands dirtier. And while D.I.Y. spectrometry can be used for all sorts of things — the Spectral Challenge website and mailing list features discussions of telling two types of olive oil apart or to figure out what’s really in those “pure” laundry detergents — the environmental sub-field may well be a sweet spot for civic science, especially when it comes to places, including cities, where exists a critical mass of participants who have personal interest in what the science reveals.

After the Fukushima Nuclear Plant disaster in Japan, for example, there was a push toward citizen radiation testing, in part to counter the lack of data coming from the government. And the Bucket Brigade uses air-sampling devices in “fenceline” communities near places like oil refineries and chemical plants. Then there’s the Gowanus Canal, Brooklyn’s notoriously polluted waterway. After Hurricane Sandy, there was intense public nervousness about what, exactly, the canal had spilled into area homes and businesses. According to Public Lab, a Spectral Challenge team is eyeing how to use D.I.Y. spectrometry to figure out whether what the Gowanus left behind is motor oil, diesel fuel or heating oil number 6.