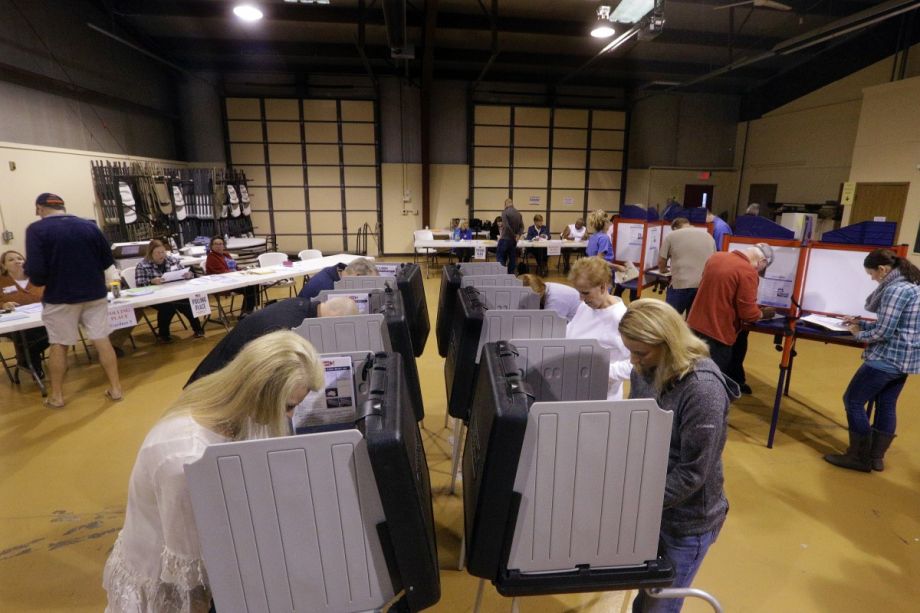 Illinois voters joined others this past fall to elect slates of candidates with diverse racial and other backgrounds. (AP Photo/Seth Perlman-File)

Convicted of a felony drug charge in 1993, Aaron Ammons knows firsthand about the barriers such a conviction can pose. He’s since chaired a local committee to improve racial diversity on juries, and runs an organization called Citizens with Conviction, which helps people with felony convictions address employment barriers.

He’s also thought a lot about barriers to voting for those with a criminal conviction.

“The front lines of democracy [are] the county clerk and the secretary of state,” says Ammons, who lives in Champaign County, Ill.

Still, he’s encountered some apathy about such elected offices, even from his own Democratic Party. “I have a hard time even now talking within my party about the importance of the county clerk races,” he says, explaining that county clerks are responsible for maintaining voter rolls. As a result, clerks exert significant influence on who is able to cast a ballot. Yet, he says, one party tends to dominate these races.

“It’s mindboggling to me, especially for the Democrats to have that position when we complain about voter suppression at the hands of Republicans when Republicans occupy these secretary of state positions and these county clerk positions primarily across the country,” says Ammons, who received a pardon in 2015 from then-Illinois Governor Quinn.

Taking matters into his own hands, Ammons was elected this November to the Champaign County Clerk’s office, one of two African-Americans elected to county clerk positions in Illinois — the first time that has happened in state history. And that was just one of a few electoral results indicating a larger trend toward more diverse candidates at the local level.

“I think the people of Champaign County are saying, ‘look, we want diversity: we need to have diversity of thought, diversity of opinion, diversity of people, so that we can more adequately represent the demographics of our county,’” Ammons says.

Asked how people responded to him about his history during the campaign, Ammons says, “most people said, ‘look, that was 20 years ago. That doesn’t matter to me at all.’”

Ammons concedes that larger forces played out at the local level — that the 2018 mid-term elections were a referendum on Donald Trump and that voters had “a tremendous amount of anger and frustration” to express against GOP candidates up and down the ballot.

Other similar results at the local level include the sweeping success of the “Black Girl Magic” slate of judges in Texas, and a Florida city with an entirely LGBTQ city commission.

Back in Illinois, Champaign County elected an openly gay sheriff — also the first Democrat to hold that office in more than 80 years. Another out gay man won the County Auditor’s job by a substantial margin.

Dustin Heuerman, who won the Champaign County Sheriff’s office, says he decided to run to give voters an option. As an openly gay man married to a Latino, Heuerman felt that he offered voters a different perspective. “We, a lot of times, have the same type of person who is elected sheriff, same type of mentality,” he says.

“A really big question for us here in Champaign County was about ICE — Immigration and Customs Enforcement,” says Heuerman. “I look at ICE as something that may be necessary at the border, but here in Champaign County, I need to be concerned about serving all of our residents and all of our visitors. It doesn’t matter to me race, ethnicity, immigration status. I have to serve you just as I have to serve everybody else. So here, it doesn’t make a difference to me that status.”

Elliott Imse of the LGBTQ Victory Fund says that LGBTQ candidates make “great elected officials” because they “push the ball forward on equality issues not just for [the LGBTQ] community, but for all communities.”

The Victory Fund provides intensive training to LGBTQ candidates on how to put together a political campaign and run for office.

“Our candidates overwhelmingly tend to be concerned about poverty issues, about ensuring people with disabilities have access to various services, that women and immigrants are treated fairly. We believe that that experience of marginalization leads them to be great policymakers,” Imse says.

Imse also holds up Danica Roem’s 2017 victory as the first openly transgender woman to the Virginia House of Delegates as key evidence that people will elect candidates who don’t fit the “conventional” mold.

The key to electoral success, Imse says, is focusing on local issues. “When [Roem] was going door to door in Manassas, she was not talking about trans issues. Her campaign platform was incredibly boring,” he says. “She was talking about fixing roads, helping with traffic and education, and she very rarely talked about anything else.”

Heuerman agrees with Imse’s analysis, and adds that high-profile stories about law enforcement abuse have led people to seek a different approach.

“I think the whole nation is ready for something different,” Heuerman says. “They don’t know what that difference looks like, but we know we need to change the way we’re doing things, and so I was the way to change things because they may not get that with my opponent.”

For Ammons, it also didn’t hurt that his wife, Carol Ammons, was re-elected to the state legislature and that Illinois saw even more African American women like her capture seats in the state house this fall. Her coattails helped with canvassing and getting out the vote, according to Ammons.

“That helped create a relationship with my campaign and [Betsy Dirksen Londrigan’s] campaign [for US Congress],” says Ammons. “You don’t always see that type of support for a down-ballot race, and we had that relationship from the very beginning.”

Imse says the Victory Fund aims to develop a “pipeline” of candidates starting with local offices. “It’s all about building up from the ground and pushing upward,” he says.

Acknowledging the many obstacles facing people with criminal records, Ammons still feels his victory also speaks to the possibility of redemption. “The fact that I did win, it sent a big message to people like me that all is not lost,” he says. “The community will give you an opportunity if you put in the work.”