Dispatch from NOLA: What Happens When Your City Puts Tourists First – Next City

Dispatch from NOLA: What Happens When Your City Puts Tourists First 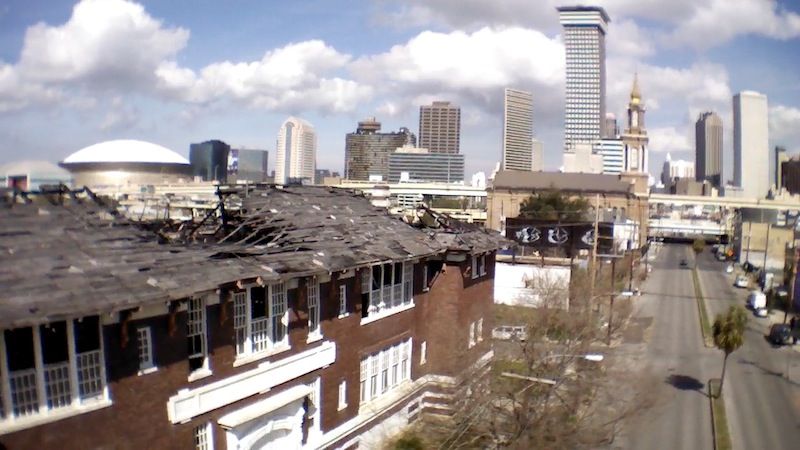 A run-down school in Central City, with the Superdome in the background. Credit: Steve Beatty/The Lens

It’s fairly safe to say that, of the estimated 150,000 visitors to New Orleans for Super Bowl XLVII, approximately zero attended the party I went to in New Orleans on Saturday night. Carnival celebrations were officially suspended in Orleans Parish this weekend because of the game — a rare interruption in a tradition that dates back to the 1800s — but this didn’t stop the proprietors of a backyard speakeasy in a run-down section of the Upper Ninth Ward from hosting a Western-themed “Mardi Gras ball,” replete with roasted boar, raccoon and muskrat and a couple old-timey bands playing country and Cajun music for an audience of roughly 100.

The party consisted mostly of the bohemian types one sometimes reads about occupying our fair city: Scruffy men with dogs and women in scrappy fake fur coats with feathers in their hair, plus a Tulane professor or two thrown in for good mix. Other than the occasional helicopter spotted swirling through the night — the city’s sky has been lousy with them for the past week — one would hardly know that America’s biggest annual sporting event would take place the next day a few neighborhoods away.

Interestingly, the Super Bowl crowd wasn’t very apparent in much of New Orleans. They seemed to have stayed mostly in the Central Business District, which abuts the Superdome, and, predictably, the French Quarter. But if football fanatics from the coasts who shelled out exorbitant amounts to stay for the weekend — nightly rentals in the French Quarter reached at least $10,000 — are largely absent from much of the city, so are the visible benefits of the estimated $1.3 billion in infrastructure improvements that hosting the game allegedly prompted New Orleans to make.

Local news outlet The Lens articulated this fact well in a photo essay about Central City, a poor black neighborhood adjacent to the affluent Central Business District and Garden District, as famous for its murder rate as it is for being the birthplace of jazz legends and host to Mardi Gras Indian celebrations and second line parades. The photos show dilapidated buildings and vacant lots, and in each image one can see the Superdome poking its bulbous crown up in the background. A streetcar line once connected Central City and its residents to wealthier neighboring districts, but it closed in 1932. In the neighborhood today, the essay notes, ”you’re still within sight of the Superdome, but have no doubt about it: The tracks may be nonexistent, but you’re on the wrong side of them.”

A different streetcar line, which opened up last week, is an example of how many “improvements” made for the Super Bowl are not really for the majority of the city’s residents. The new $45 million stub of a line runs roughly 10 blocks from Canal Street, which is the upper edge of the French Quarter, to the local Greyhound Bus/Amtrak terminal, which is (coincidentally?) a short walk from the Superdome, but little else. Urban planner and streetcar historian Jack Stewart told the Baton Rouge Advocate that, because there are only a few hotels and office buildings on the corridor, the line doesn’t provide any logical connections: “It’s not for the person that wants to get to their home from downtown,” Stewart said.

Meanwhile, residents elsewhere in the city advocate, as they have for decades, for streetcar lines that run through places where people from a variety of backgrounds live and work, such as the St. Claude Avenue corridor, a bustling mixed-use district with spotty public transit service.

Of course, projects such as this new streetcar line that seem to unabashedly cater to tourists are really meant, in the end, to help the city as a whole. Tourism is big business in New Orleans, and the more we support the tourism economy, the better the economy at large will be, and the better off we’ll all be. Or so the logic goes.

There are hints of desperation in this approach. New Orleans hasn’t thrown huge portions of its weight behind the tourism industry because we’re a bunch of zany party animals who can’t get enough of wild celebrations. Even though the city administration under Mayor Mitch Landrieu has worked to diversify the economy, and despite New Orleans having recently earned praise for its entrepreneurial opportunities, the estimated 10 million people who will visit the city this year provide a crucial portion of our bread and butter. The relative collapse of the oil and gas industry in the 1980s — which picked up slack caused by the mechanization of the port and the resultant job losses earlier in the century — coincided, according to the current Arthur Hardy’s Mardi Gras Guide, with the first huge throngs of tourists to flock to Mardi Gras.

Since then, administration after administration has ramped up tourism efforts to arrive at what cynical locals now call the “Festival Industrial Complex.” This refers to the seemingly nonstop barrage of concerts, festivals and general profitable merrymaking that begins in January with the start of Carnival, reaches a second peak during Jazz Fest in late April and finally peters off as summer’s heat encroaches. Events such as Voodoo Fest in October fill in the fall. Every now and then a new festival pops up that proclaims to be a “locals-only” occasion, but the best of these are invariably swallowed up by the Complex and transformed into corporate tourist spectacles in a matter of years.

No one really wants New Orleans to be a city built to appease tourists just so the rest of us can live in it. But as the local tourism industry continues to lust after events like the Super Bowl, and as the city plans its “improvements” around them, it seems we’re headed in that direction. The Super Bowl is just as much a corporate event as it is a tourist event, with tickets doled out in bonus packages and sponsor representatives networking and jockeying for television spots. Dressing up the areas New Orleans will show off to the world ensures moneyed visitors will see the best we have to offer — we’ll say nothing here about the Superdome’s power infrastructure — as long as they stay out of the neighborhoods like Central City that could really use improvement. Those areas will have to wait for a sort of “trickle-out” economic development policy under which they will never be a top priority.

But hey: It’s Mardi Gras next week! Boar roasts and the like will abound! It would be utterly disingenuous of me to imply that I — and most people I know here — do not absolutely adore the celebration upon which much of the tourism industry is based. Most American cities face economic peril at this point and are scratching their heads for ways of reinvigorating industry and growth. While that’s the case, I prefer to live in a city that provides a jubilant weeks-long distraction from such things. It’s also nice to be able to make a buck or two from the party, but it’s not a serious way for a city to make a living.