Dispatch From Berlin: The E-Scooters Have Landed – Next City

Dispatch From Berlin: The E-Scooters Have Landed 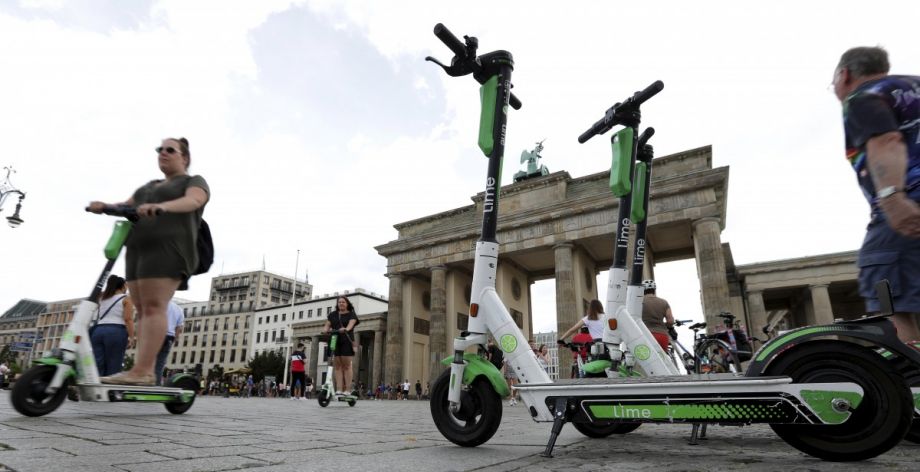 In this Tuesday, Aug. 6, 2019 photo, a woman on an e-scooter drives past more scooters on a square in front of the Brandenburg Gate in Berlin, Germany. Berlin plans to crack down on electric scooters being dumped on sidewalks and other “anti-social behavior” that's drawn the ire of residents in the German capital since the vehicles were made legal two months ago. (AP Photo/Michael Sohn)

In Berlin, tales of cycle rage have taken on a new spin lately.

A friend, co-organiser of Critical Mass events in the city, told me she was on her bullet commute across Kreuzberg when an unfamiliar object cruised into her sight. A man, mobile but upright, like the primal ancestor on two feet: He was on an e-scooter. To her fury, he joined her at the red light. When the light changed, he serenely sped ahead and she made a point of overtaking him as aggressively as possible.

Why the antagonism? “I wanted to mark my territory,” she shrugs. “He hadn’t done anything wrong but I still had this fierce reaction to seeing him in my space.”

But these interactions between scooters and cyclists (and scooters and pedestrians, scooters and cars, and scooters and scooters) are all but guaranteed to become more common. Berlin has already welcomed more than 15 companies to its streets. While some, like my friend, are upset by these new arrivals, others welcome them. Regardless of what side of the scooter debate they fall on, Berliners agree steps need to be taken to keep the city moving, as its population swells and its public transportation begins to creak.

Berlin is a city that lends itself to biking. It was even ranked 19th on a global list of cyclist-friendly cities by Coya. The terrain is flat and it lacks a congested central business district. Its urban landscape is rather diffuse, partly a consequence of its tumultuous history of destruction and division.

On the roads, though, space can be scarce. Cyclists have to contend with erratically planned lanes that slalom between trees, parked cars and buses. Then there are the yawning potholes and stretches of unsurfaced cobbles which rattle the teeth like dice.

There is also physical danger from motor vehicles. According to statistics from the Berlin police, 7,971 road accidents involving cyclists were reported in 2018, of which 72.32 percent involved personal injury to the cyclist. Tragically, 11 ended in death — a rate of almost one cyclist per month.

Cyclists are not the only ones affected by the dominance of cars on the streets of Berlin. Air quality is regularly found to be worse than nearby (and more densely populated) metropoles like London and Paris, and ownership of diesel cars remains relatively high, as it does across car-loving Germany.

Watching the traffic jams snake along major arteries like Karl-Marx Allee, it is hard not to wonder how the city will grapple with the dominance of cars as it continues to expand. Berlin’s population is forecast to jump by 181,000 by 2030.

One approach to reducing car use, currently being discussed by the Berlin Senate, is to make public transport more affordable. Socialist mayor Michael Müller made headlines recently with his proposal to trial the so-called ‘Wiener’ model. Named after Vienna, where the scheme was introduced in 2012, it would slash the price of a yearly travel ticket to €365 - or €1 per day. The plan would allow for travel across Berlin’s U-bahn, S-bahn, bus and tram network and would make for a hefty reduction: under current pricing, an annual ticket for Berlin’s central AB zones will set you back €728, going up to €961 if you include the outer C zone.

In Vienna, almost half the city’s population takes advantage of this subsidized yearly ticket, and proponents hope that slashing the cost of public transit in Berlin would help increase the share of trips taken by public transit, currently only 27 percent.

But at what cost, critics demand to know. Members of Angela Merkel’s CDU party, in particular, and prominent local media have greeted the plan with outright horror. Mindful of Berlin’s ongoing development, they fear fiscal ruin, pointing out that the €365 ticket would bring a colossal loss of income and produce a shortfall (a hardly insufficient €100 million) that falls on taxpayers to make up. Beyond that, there’s capacity issues to think of. If Müller’s proposal goes through, the additional passengers will add to an already growing crush of riders. Since August 1 of this year, schoolchildren can ride for free on Berlin’s entire network, and in August 2021, those employed by the state will also receive free passes. All of this is going to put unprecedented strain on BVG (Berlin Transport Company)’s capacity to provide safe, reliable and sustainable public transport.

Berlin is still not a wealthy city, even if creeping gentrification undermines its former tagline of being the “poor but sexy” capital. The distinctive yellow U-Bahn trains are old, at growing risk of developing faults and grinding to a halt, while orders for a replacement fleet worth over €3 billion have been delayed again. This is leading to grumbles from passengers and accusations of mismanagement.

It’s clear that BVG needs more funding if it is to grow and meet the huge demands that will be placed on its system, in order to finally help wean Berliners off cars. People remain unsure, though, if the costs involved are sustainable.

Enter the e-scooter: a high-tech, free-market solution to urban mobility.

E-scooters arrived in Berlin much as in other places. First as a whisper and then, overnight, they appeared lined up in the streets and ready to roll. And they are multiplying. Since debuting in June, over are now operating in Berlin, with established US micro mobility firm Lime competing alongside local brands Tier and Circ.

Berliners have greeted the sudden ubiquity of these new devices with everything from delight to skepticism to full road rage. Here, the same arguments are being made as elsewhere around the world. Critics voice concerns about user safety and more widely about public space being claimed by private tech companies. These “sharing” startups, which Berlin pitches itself as a hub for, seem to lack any real commitment to city authorities or to the notion of being “good neighbors” (a cardinal German virtue).

Others counter that micromobility is an effective, practical and exciting way to break the traffic deadlock. Julian Jost, CEO of PropTech and office space startup Spacebase, recently hosted Lime at his Kreuzberg campus for the launch of their Berlin operations. He is convinced their vision is a valid way to challenge transport habits in the city.

“The sharing economy brings disruption. That’s unavoidable. New ideas cause friction and sometimes resistance. While we need to listen to people’s feedback, we can break up the model of cities built around car lanes and parking spaces. The tech which exists now, it’s new, it’s the first time we have this. We can use it to change behaviour and organize our cities in safer, more sustainable ways.”

Public transport remains fundamental, he says, to an integrated model that will accommodate everyone — cyclists and scooters included. Part of that will involve boosting funding to make transport tickets more attractive, and also improving the network of cycle paths, but we should not be limiting new options. “You can’t plan everything. Innovation happens. Plus, e-scooters are fun. Look at people smiling as they ride one for the first time. How often do you see that? Give people fun as an incentive, and they will take it.”

My cyclist friend remains unimpressed. “We already have tourists doing a ‘safari’ in Trabis [socialist-era cars], on Segways and on beer bikes. It’s not Disneyland.” But like any Berliner, she is also deeply pragmatic. “I’ll keep wearing my helmet and protecting my space. The scooters are here now, anyway. They’re a fact of city life and they’re not going to disappear.”

Edward Belleville is a writer and translator based in Berlin.