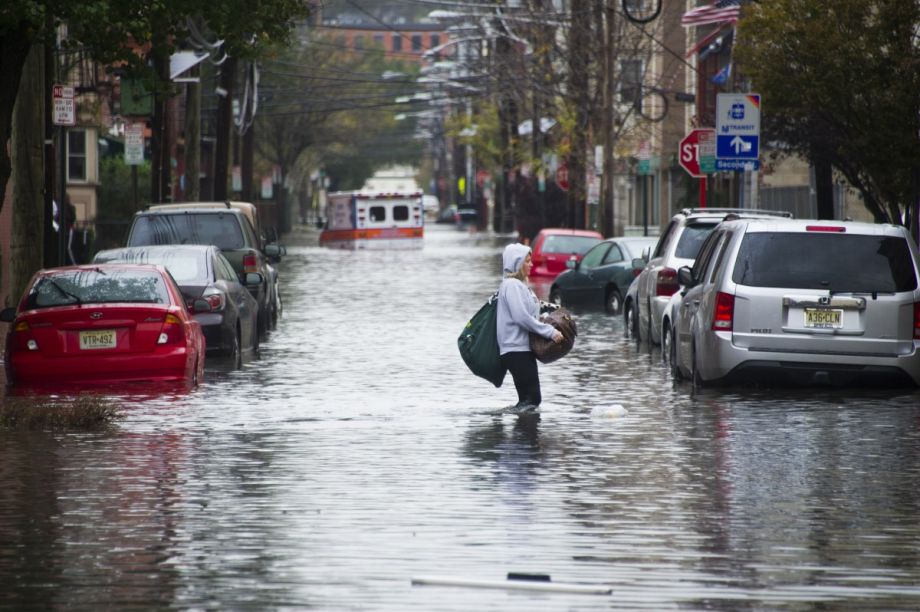 Flooded streets in the aftermath of Hurricane Sandy in Hoboken, New Jersey, which was recently named a role model of resilience. (AP Photo/Charles Sykes, File)

Recent science argues that humans have already pushed Earth past the safe level for carbon dioxide concentrations — and that we’re heading toward, if not certain destruction, then at least a planet “much less hospitable to the development of human societies.”

This threat is what has cities focused on urban resilience, and preparing for the effects of climate change. Cities have hired chief resilience officers to make sure they don’t just muddle through the next hurricane or earthquake, but thrive through it. Minneapolis is hoping to create the most resilient neighborhood in the country. Post-Hurricane Sandy New York continues to plan for future flooding. To grapple with rising sea levels, Boston hosted a Living With Water design challenge.

Innovative — and pretty — ideas abound. Yet, amid partisan political battles and tight municipal budgets, it’s more difficult to make the case for paying for resilience.

“A city that is looking to pick between schools and spending a billion dollars on a seawall — you’re always going to want to budget for more immediate priorities,” says Shalini Vajjhala, founder and CEO of Re:focus Partners. Re:focus, in partnership with Goldman Sachs, risk modeling company RMS, reinsurer Swiss RE and the Rockefeller Foundation, is aiming to fix that with a new catastrophe-bond-like product called Re:bound. (Next City receives funding support from Rockefeller.)

Imagine you live in coastal Florida. You likely want to buy good homeowner’s insurance, since the risk of your home being washed away in a hurricane is not insubstantial. But because the risk is higher than in other places, your premium is likely to be much higher. At some point — especially as tropical storms and hurricanes become more frequent and more severe— those premiums become too high to afford.

At the same time, an insurer who holds policies in a risky area could be financially wiped out if it had to pay out on all its claims at once. So insurers buy reinsurance, which transfers some of that risk to another party.

“A catastrophe bond is like life insurance,” Vajjhala says. “In the event of a really disastrous event, you get a giant lump sum payout. On the other hand, life insurance doesn’t make you healthier.”

Here’s how it works. RMS runs models to find a city’s likelihood of being hit by a catastrophe — say a severe storm — and predicts how much the damage will be. Then it runs the same model but adds in an infrastructure improvement, like a seawall, that can mitigate the damage. The difference in cost goes to the city to help fund that improvement.

Hoboken, New Jersey, is working on building an underground parking garage that, in the event of a severe storm, can hold millions of gallons of stormwater, “like an underground bathtub.” It would prevent basements from flooding and theoretically keep the lights on at hospitals. (In this scenario, the cars are collateral damage, but the benefits still outweigh the risks.) Hoboken is already pursuing alternate funding for this project to get it off the ground sooner, but the city — just recently recognized as a role model for resilience by the UN — has a number of other stormwater management programs on the boards that the Re:bound program could help pay for.

Re:focus and its partners are currently running the numbers on these projects and more — in Norfolk, Miami Beach and elsewhere — to make sure that Re:bound makes sense.

“We’re trying to get out of the world of the snake oil, of saying, ‘Do this nice pretty drawing,’” Vajjhala says. If they find significant savings, the program will be officially announced at the UN Climate Change conference, COP 21, in Paris in November-December 2015.