What The Digital Revolution Means for Middle-Class Jobs – Next City

What The Digital Revolution Means for Middle-Class Jobs 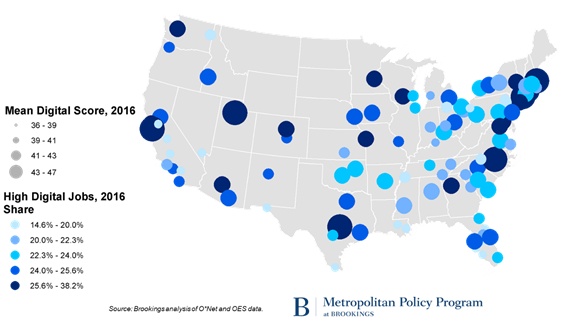 (All graphics courtesy of the Metropolitan Policy Program at Brookings)

According to popular narrative, technology’s rapid remake of the U.S. workforce has benefited wealthy coastal metro areas — and their more highly educated residents — and left the rest of the country behind. It’s a force that’s fostered inequality, benefited the already privileged and widened the urban-rural divide.

But as with most popular narratives, that one isn’t entirely true. From nurses who use portable vein finders for blood tests to auto mechanics troubleshooting cars on their laptops, technology is reshaping industries across the board — not just the higher-skilled ones that have come to represent the workforce in cities like San Jose or Austin. But place does still matter when considering the benefits of tech, and even lower- and middle-skilled positions reap more rewards in terms of pay and upward mobility in digitally oriented metros.

Those findings come by way of a new report from the Brookings Institute’s Metropolitan Policy Program. The report attempts to address a shortage of data on the subject of what it terms “digitalization” across industries and labor markets by compiling information from the Occupation Information Network (O*NET), a project funded by the Department of Labor Employment and Training Administration, and numbers from the Occupational Employment Statistics (OES) and the Current Population Survey. Researchers then applied numerical digital scores to every occupation they surveyed and classified those occupations as requiring low, medium or high levels of digital skill. A software developer or financial analyst would have a much higher level of digital skill than a nurse or sales manager. A personal care aide or construction worker would fall into the lower level of digital skill.

Using those numerical scores, researchers were able to get a better view of what, exactly, digitalization is doing to the U.S. workforce, and they walked away with several conclusions. Some are obvious — like the fact the U.S. economy is digitalizing at a very rapid pace. From the report:

And even as employment in that lowest tier have declined, the skills associated with it require a higher degree of digitalization.

“At the lower end of the scale, the average 2002 digitalization score of 14 among low-digital occupations rose by 22 points, or 154 percent over the time period, to reach 36 in 2016,” according to the report. “Many low-digital occupations, including home health aides (score rise from 3 to 23), welders (3 to 23) and heavy truck drivers (7 to 30), saw their scores triple or more.”

But the takeaway from these changes isn’t just that the highly skilled are being rewarded while the rest are left behind — though there is certainly an element of that. Instead, the numbers show a slightly more complicated picture. The authors explain:

In this regard, digitalization — a form of automation — appears to be contributing to: job creation and pay gains in high-digital industries; slow job creation and modest pay gains in medium-digital occupational groups (except in personal-services like health care, where the growth has been faster); and faster job growth but low and slow-growing wages in low-digital personal service occupations.

And finally, wage distribution across the county appears to correlate to each’s state’s digital score. Metros with more high-tech occupations — San Jose, Austin, Washington, D.C. — tend to have witnessed more high-digital job creation, while cities with a fewer highly digital occupations (Stockton, California; Youngstown, Ohio) have seen slower employment growth in highly digital industries. So digitization is certainly a contributing factor to the divergence of various cities’ prosperity levels, but there’s a sort of trickle-down effect in regions with higher shares of digital jobs, and even the lower-skilled workers in those areas appear to benefit from the regional economy.

The report’s takeaway is twofold. Digitalization is “vastly expanding the potential of the American economy, and generating opportunities for many,” but it is still a divisive trend. As the authors state, “the construction of an inclusive labor market as digitalization proceeds won’t happen by itself.”

The full report is available here.