In the Heart of Mumbai, an Art Festival Reveals a Vivid Picture – Next City

In the Heart of Mumbai, an Art Festival Reveals a Vivid Picture 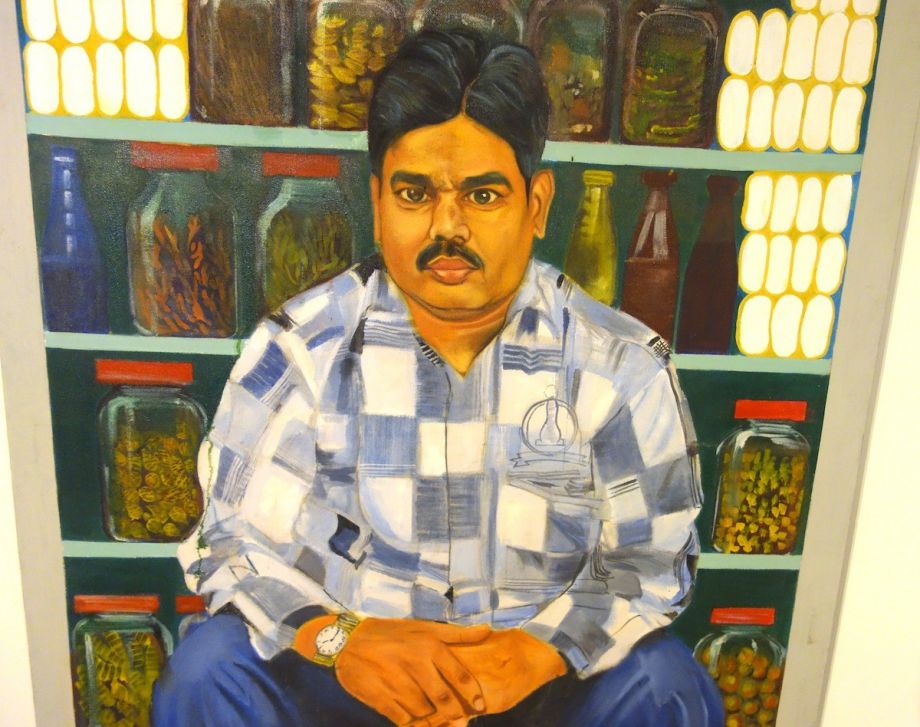 The portraits that hang in the gallery found down a garbage-cushioned path off 90 Feet Road are far from any arts district or newly gentrifying neighborhood. This isn’t New York’s Chelsea or London’s Mayfair. The exhibit is part of the Dharavi Biennale, which is going on right now in Mumbai’s most well-known informal settlement. The large-scale art festival features locally made work, mostly using recycled materials, about subjects and issues important to the community. There’s everything from puppets discussing tuberculosis to a sound map of local industries.

The Biennale has a message, actually many of them. It attempts to celebrate Dharavi’s diverse occupations, languages and customs in spite of a real-estate-driven city ready to gobble it up. The Society for Nutrition, Education and Health Action (SNEHA), which organized the Biennale over the course of two years, curated many of the installations around health and gender issues — key aspects of the NGO’s work.

At a garage-turned-gallery, the portrait of a stern-faced Mohamed Salim, a resident bonesetter in Dharavi, welcomes me into a small, colorful office where pain and disease is supposedly cured and healed. Salim’s stern brow and intense eyes echo the seriousness with which he undertakes his work. Bonesetting for him is not just a job; it has been the family occupation for generations. On another gallery wall is a traditionally dressed Abdul AzimKazi, a local amulet maker in Dharavi who believes in the power of medicine and prayer to heal those in need. “The possibilities are endless,” pronounces the “Healers of Dharavi” exhibit. “In the process of seeking an affordable cure one might simultaneously engage with science, faith and tradition.”

One of the most arresting exhibits at the Dharavi Biennale, “Mapping the Hurt,” began with a workshop of women from SNEHA’s Little Sisters program. The Little Sisters are a small army of women in Dharavi equipped with cell phones to capture incidences of domestic violence. Women are often afraid to report cases of abuse but, says Simran Banoo, one of SNEHA’s Little Sisters volunteers, “they feel more empowered when they see us with the technology.” Banoo and other volunteers register statements by victims or take video on the spot to gain a better understanding of the number of domestic violence cases in an area.

SNEHA’s efforts extended out into a workshop, called an Art Box — one of 20 such educational opportunities that took place in the two years leading up to the Biennale. The Art Box on gender-based violence and harassment in public spaces brought together the Little Sisters participants to document spots in their maze-like neighborhood where they had been victims of, or witnesses to, verbal, sexual or physical violence. The group started with a flexi-print map of Dharavi’s hundreds of small neighborhoods and thousands of alley ways. One by one, the women marked the areas of concern in their localities as background for the next step. Then they stitched together the painful experiences into a map made of old jeans, identifying unsafe public spaces with colorful embroidery. The final piece, “Mapping the Hurt,” addresses a growing concern for women’s safety in urban India — a subject that continues to make regular headlines across the country.

Health is about more than sniffles and colds in Dharavi, where thousands of micro-enterprises provide work to many of the 300,000-plus (a much-disputed number since there’s no official count) residents, and services to the local and global community. The recycling district, for example, is where Mumbai’s trash gets a second life — everything from soda cans to airplane trays to computers to pharmaceutical containers. In a second exhibit space, just upstairs from a bustling market street, “Hope and Hazard” features 300 oil cans stacked across three rows. The cans are plastered with photos, taken by local college students, that provide visual evidence of the lack of concern for personal health and safety in the recycling compound.

Sounds from two industrial neighborhoods are played out of an old washing machine drum at the “Ear Drum: Mapping Neighborhood Sounds” exhibit. (Note: Post author Carlin Carr was involved in the project.) Intricate street maps (top photo) with the sounds plotted on them are in the background. (Photos by Michael Burns)

Dipesh Thakker, the Biennale’s project coordinator, says that the workshop leading up to “Hope and Hazard” was one of the most eye-opening. The college students wandered the lanes of the recycling district with cameras capturing hazardous work conditions. Thakker created his own installation after viewing the shocking environment where men were sifting through glass with no gloves or protection. Dharavi’s widely cited entrepreneurial spirit and annual $650 million in business comes at a cost — one that the exhibit hopes to bring attention to.

The Biennale’s quirky and colorful installations send out messages beyond the settlement’s tightly confined 525 acres in the heart of a bursting-at-the-seams city. The art invites residents from the megapolis at large to explore what makes Dharavi tick — what the area struggles with and what it contributes.

In opening this conversation, the Biennale acts as a bridge to a wider discussion on the future of informal settlements in a city driven toward shiny high-rises and “world-class” status. The discussions are complex in an area in obvious need of better public services and safety measures. Underneath, however, is a rich tapestry of cultural, economic and social connections that the Biennale can only begin to celebrate with the world — features residents hope will make their way into higher-level discussions on Dharavi’s future.