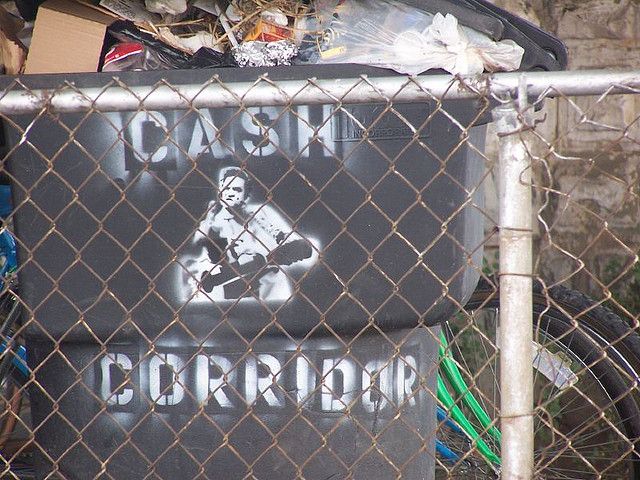 A trash can in the Cass Corridor, the future location of Detroit’s new entertainment district. Credit: Joseph Novak on Flickr

Anna Clark has an excellent Forefront story this week on a 50-year plan meant to turn Detroit around, so I thought I’d highlight one of the newest economic developments in the Motor City. No surprise: It’s an arena. Sports!

They’re calling it a “downtown events center and entertainment district,” but the impetus here is a new hockey arena for the Red Wings, who have played in the city-owned Joe Louis Arena since 1979. The price tag is $650 million, with $450 million for a brand new 18,000-seat arena and entertainment center and $200 million for residential, retail and office space. It’s being funded with a mix of private ($365.4 million) and public ($284.5 million) investment.

But how can Detroit, a city teetering on the verge of bankruptcy and currently under the hand of an emergency manager, afford a luxury like a shiny new arena? It can’t. Bill Shea at Crain’s Detroit Business dove into the structure of the tax increment financing (TIF) funding the public side, which covers a 615-acre swath of land in downtown Detroit. Moody’s Investor Services certified all Detroit bonds below investment grade. And since emergency manager Kevyn Orr said the city’s long-term debt could be as much as $20 billion, the city won’t by issuing bonds anytime soon.

Which is why the Michigan Strategic Fund, and not the city of Detroit, is issuing 30-year bonds for the public portion of the construction. Those bonds will be paid off by property taxes captured within the 615-acre district downtown that includes Greektown Casino, DTE Energy and General Motors. The latter accounts for about 22 percent of the “taxable value” within the district, according to Crain’s.

The new arena will create about 5,500 jobs and the entire mixed-use district is anticipating a total of 8,300, according to the Detroit Economic Growth Corporation (DEGC). The Red Wings are hoping to start playing in the new arena in 2016 or 2017.

Whenever these new developments come in, people like to tout the potential economic impact. And while the DEGC is saying the new district will have a $1.8 billion impact, economists, according to MLive.com, remain skeptical. There are only 41 regular season hockey games a year plus potential playoff games, which means you need about 324 Bob Seger and Kid Rock concerts to fill 18,000 seats the rest of the year. Economist Dennis Coates told MLive that the $1.8 billion number is “way inflated.”

Regardless of the potentially inflated economic impact number, 8,300 jobs is a lot of jobs, especially in Detroit. And since the city is using TIF instead of just doling out cash to a wealthy owner of a local sports franchise, it won’t leave the constantly diminishing tax base completely hamstrung. Surrounding businesses will help pay for the construction which should, in theory, increase the value of their land and hopefully bring more customers. I’m normally not an advocate of publicly funded stadiums, but this isn’t just blind welfare for rich sports owners — all businesses in the district are paying for what they hope spurs more growth.

But what does it mean for the surrounding neighborhoods? The new arena is just north of downtown and the central business district. As development slowly creeps out, there is the potential for displacement among residents who have weathered hard times and empty streets for years. I don’t think there will be an influx of residents as soon as the puck drops at the new arena, but Detroit’s tight rental market has been well-documented. I imagine that $200 million going towards new residential will skew to the loft crowd, not affordable housing.

Journalists like to talk about the bleeding of population from Detroit, but people still live in the Cass Corridor, where the median household income is $9,347, right in the heart of the new 45-block development.

In a show of good faith, I’d like to see the proprietors of the new entertainment district take a page out of the new Detroit Whole Foods’ playbook and hire local residents.