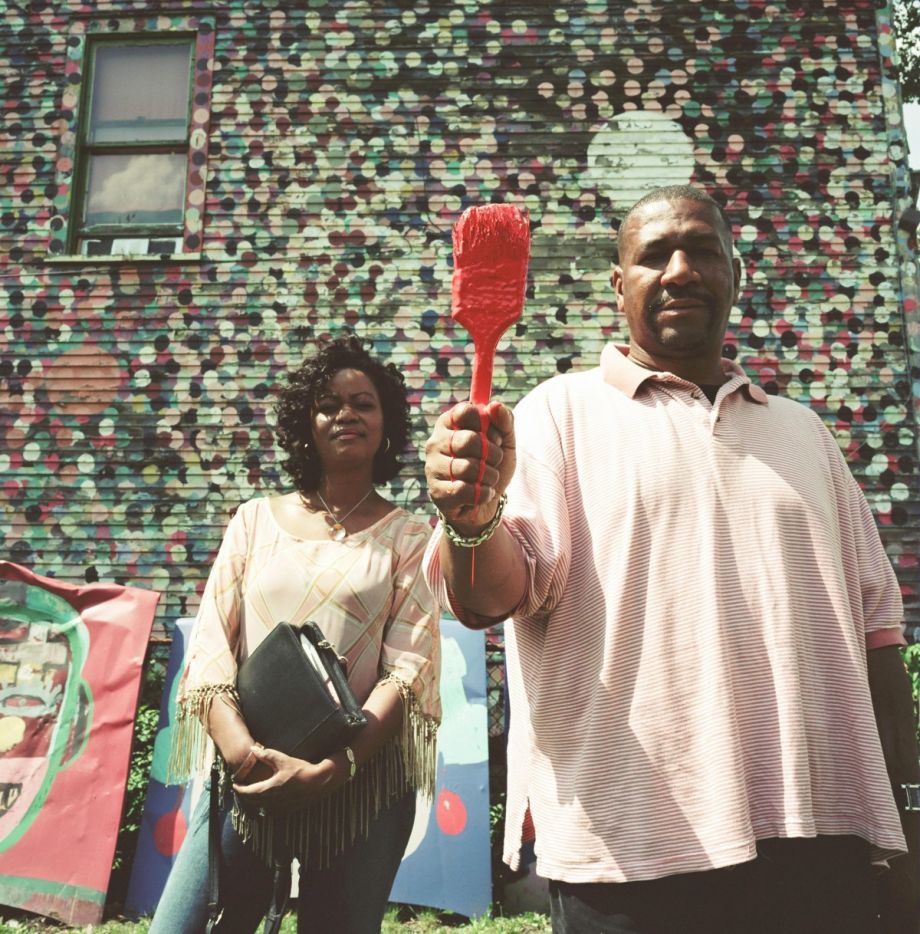 When artist Tyree Guyton set out to reimagine what his derelict childhood neighborhood in Detroit would look like more than 30 years ago, he used what others would consider trash to transform blocks into an arts neighborhood.

Without a budget, foundation dollars or national media attention, Guyton picked up a paintbrush in 1986 and covered his grandfather’s house on Heidelberg Street with colorful polka dots.

Over the years, the outdoor community art project grew to cover two city blocks of abandoned houses. He took stuffed animals, old shoes, salvaged car parts and other discarded found objects and affixed them to the houses’ exteriors.

Neighbors would gawk, the city tried to shut them down several times, but Guyton persisted, and 30 years later, his Heidelberg Project has managed — despite threats of demolition and a series of arson fires a few years back — to attract some 275,000 visitors a year from around the globe.

And now that the Heidelberg Project has reached the three-decade milestone, the arts organization is looking to take its efforts to another level with its Heidelberg 3.0 campaign.

“Our vision has always had to do with bringing hope, new life to the neighborhood,” says the Heidelberg Project’s executive director and Guyton’s wife, Jenenne Whitfield.

What that vision looks like is creating an inclusive community, where the properties that became the project’s infamous installations can serve not just as pieces of reclaimed art, but as dwellings where artists can live and take part in neighborhood investment.

In the works is a pilot project that includes the major renovation of the project’s so-called Numbers House — an 1890s-era home whose exterior is covered with painted numbers that currently serves as Heidelberg’s gift shop — into a studio and gallery for emerging artists and, upstairs, living quarters for an artist-in-residence who would live there for three months to a year.

In return, the artist would agree to contribute his or her talents toward some aspect of the Heidelberg’s mission. That could include providing workshops to the community in his or her respective medium or holding public performances or exhibits.

So far, Whitfield says $110,000 has been raised through foundation dollars and an online fundraising drive. The Erb Family Foundation has agreed to match that initial round of donations.

Depending on the success of the Numbers House project, Whitfield says Heidelberg wants to rebuild several of the structures — like the House of Soul and the Party Animal House — that were destroyed by arson.

In keeping with the arts community’s whimsical theme, the exteriors of the homes would again sport funky art installations. The House of Soul, before it was burned to the ground in 2013, for example, had been adorned with old vinyl records. This time around, Whitfield says, the home could be occupied by a musician and could be used as a venue for live performances or educational workshops.

And redevelopment is not just confined to the Heidelberg’s two-block site.

Residents and business owners belonging to the McDougall-Hunt neighborhood — the area where the Heidelberg Project is located — meet regularly to discuss possibilities for their properties.

Donna Kassab, a second-generation McDougall-Hunt business owner, is considering how she might reimagine her family’s liquor store at Mt. Elliot and Mack, blocks from Heidelberg, into a healthy food market or café. She imagines residents and visitors alike buying nutritious food locals getting access to the type of jobs that are popping up just a few miles away from Heidelberg.

Kassab also runs the Power Entertainment event planning company and last year teamed up with the Heidelberg to host a block party celebrating the project’s 30th anniversary in the neighborhood. She says that she and Whitfield have been in ongoing conversations about what redevelopment of her family’s property might look like, keeping in mind both the needs of residents and visitors to the landmark public art space.

Currently, aside from the snacks and sodas sold in her store, the food at a nearby gas station and a Coney Island diner, there aren’t many food choices in the area. Meanwhile, about two miles west is the city’s only national supermarket chain, Whole Foods Market, which sits within walking distance to a growing number of trendy eateries.

“We’re on a very good corner, but everyone who I’ve talked to would love the idea of change,” says Kassab.

The Numbers House pilot project coincides with widespread redevelopment taking shape in the greater city core by the likes of real estate guru and Quicken Loans founder Dan Gilbert and the Ilitch organization, which constructed the tax-subsidized Little Caesars Arena.

One major concern among longtime Detroiters is that city neighborhoods are either neglected or gentrified by outsiders who do not have the community’s best interests at heart.

While city leaders have taken steps toward implementing more inclusive design practices, native Detroit nonprofits like Heidelberg have never waited for the city to step in on its behalf.

The public art project was borne out of Guyton’s desire to reimagine the McDougall-Hunt neighborhood, one of the oldest African-American communities in the city, where he grew up.

But the Heidelberg has also had its share of detractors, including neighbors who’ve called the site an eyesore and City Hall, which also considered the arts community a nuisance and in the 90s demolished several other decorated houses that were part of Heidelberg.

In 2013, the site became a major target of arson when vandals burned several of the site’s structures to the ground. Around this time, the city had also threatened to seize several properties for unpaid taxes.

Today, poverty remains high in the neighborhood, with about 40 percent of the population below the poverty line, which is $12,140 for an individual. About one in five housing units are vacant within McDougall-Hunt’s zip code of 48207.

Whitfield hopes to change that. To her, it begins with changing people’s minds about what the community can look like.

“Our vision has always had to do with bringing in hope and new life,” Whitfield says.