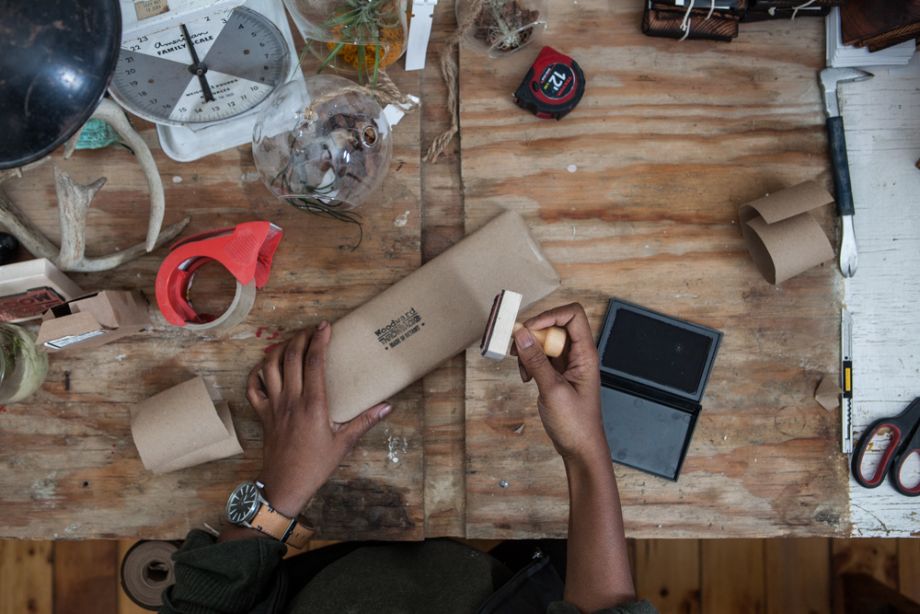 The small team at Woodward Throwbacks doesn’t plan to work small. The business was founded in 2013 to recycle materials from illegal Detroit dumping sites into beautiful goods that are rich in character. They produce everything from dining tables to burnt-wood coasters. But this was never meant to be a novelty shop.

“We were never trying to retail, really,” says Kyle Dubay, founder and co-owner. “We were trying to do wholesale, not just to boutiques but to the Targets of the world. We wanted big clients so we could do big volume recycling, and to do this on a scale no one has tried so far with recycled materials.”

Indeed, after just two years, the company has already landed an account with upscale retailer Nordstrom, and Dubay says it’s on the brink of signing with two large national distributors.

That’s where Motor City Match came in. The new city-directed program gives technical assistance and $500,000 in grants each quarter to Detroit businesses and to building owners. The “match” part of the program connects property owners who are looking for new tenants with the owners of businesses that are looking to expand their footprint. The program has backed nearly 100 businesses since launching in early 2015. Ten companies received grant funding in the first round, ranging from $10,000 to $100,000, and 87 more received other kinds of assistance, like help writing business plans.

The initial grant winners illustrate the eclectic entrepreneurialism of Detroit, including an indoor hydroponics farm, a jazz-themed restaurant, a construction management firm, a nail and shoe salon, and a wholesale distributor of Mexican food. Mayor Mike Duggan told the press that nearly 70 percent of applicants were from businesses owned by African-Americans, and more than half were owned by women. Fifty percent were owned by women of color.

Motor City Match’s $40,000 grant allowed Woodward Throwbacks to renovate a new workshop on Michigan Avenue, which will expand its production capacity. They will also open a small resale space open to the public a few days a week and activate a stretch of street that “definitely needs more active businesses,” Dubay says.

“Motor City Match is a program that’s truly unique to the city of Detroit,” said Rodrick Miller, CEO of the Detroit Economic Growth Corporation, in a press statement. DEGC operates the program. “No other city in the country has a program like this one to help foster and support the local businesses that continue to drive Detroit’s recovering economy forward.”

Both business owners and property owners apply to the program to become eligible for a “match.” The program prioritizes businesses that contribute to the wellbeing of the community and real estate on the city’s traditional commercial corridors. In the first round, the DEGC selected 27 buildings from more than 150 landlord applications as potential matches. Once a match is made, the grant is made to one partner or the other to fund build-out of workspace. Winners are required to stay in Detroit for at least two years.

The biggest winner in the first round was J&G Pallets & Trucking, which took home $100,000. A family business founded in a backyard more than 20 years ago, it builds wood pallets using recycled and reused material. Primary customers are manufacturers, including the Faygo soft drink company. Les Lance, the company’s business manager, says the Motor City Match funds will be used to expand into a new facility and to buy a machine that will help it begin to build pallets from new wood. Both developments should allow it to service new customers.

Strengthening the company goes beyond the obvious benefits, however. As a business that describes itself as faith-based, J&G Pallets makes a point of hiring people who often have trouble finding employment, including those who have been incarcerated. It’s worked out well for J&G: Many of these hires have been on the job for more than 10 years. If the match money has the anticipated impact — Lance says that they hope to have a 15 to 20 percent revenue increase over the next three years — that filters down to supporting the most vulnerable Detroiters.

Funding for Motor City Match comes from an array of public, private and philanthropic sources, including block grant money to the city of Detroit; contributions from the Knight, Kresge, and Erb Family foundations; and funds from Bank of America and Cincinnati-headquartered Fifth Third Bank.

Dubay says the funding has already helped his business, but perhaps even more significant was seeing the city of Detroit supporting entrepreneurs like himself. Dealing with the city as a business owner isn’t always “a great experience,” he says. Even the basics, like trying to get permits, is “always a pain, always harder than it needs to be. Delays in renovation projects is often at the hands of the city.”

But programs like Motor City Match show that Detroit is “proactively trying to speed up the process,” he believes. Plus, the program gives businesses the imprimatur of credibility, which can be meaningful when a business is moving to a new location or trying to reach a new client base.

Dubay’s quibbles with the program largely come down to communications: “When I tell people we won, some people in the community who are pretty active people may not know about it. I was a little surprised.” Dubay says this suggests that Motor City Match should do more to not only publicize the program to potential applicants, but also beyond even the city borders. Buzz should be a stronger benefit of being a winner, he believes.

“Everyone wants a feel-good story about Detroit,” Dubay says. “Being that it’s the city putting on this program, they should be going for bigger press.”