Detroit Real Estate Developer Focuses on the 90 Percent – Next City 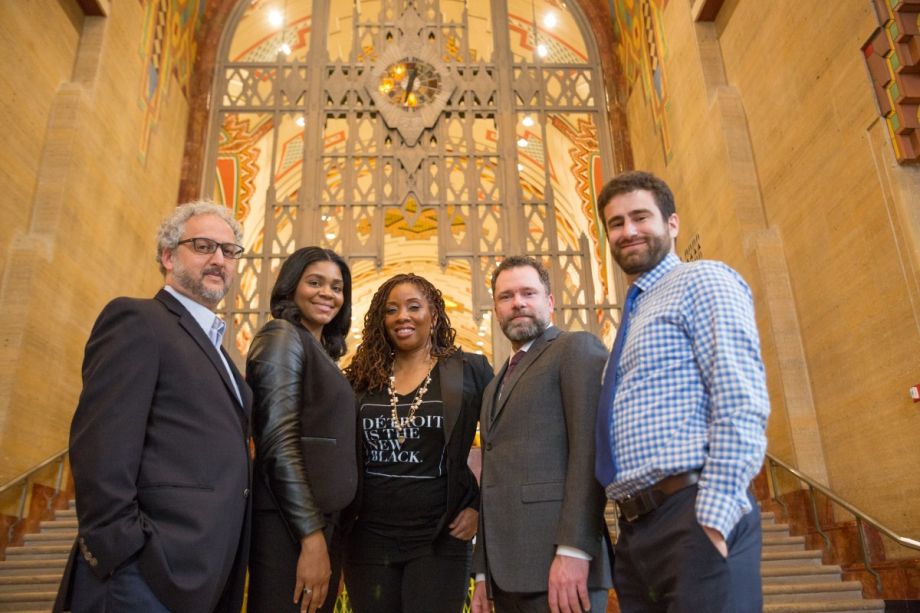 In many ways, Sonya Mays’ story is Detroit’s story.

To escape the oppression of Jim Crow, her parents’ families moved to the Motor City from northern Arkansas and northern Mississippi. “They were able to buy their first home here 40 years ago,” she says. Her mother’s sister became a Detroit police officer (now retired).

As the city’s economy began the long decline that eventually led to bankruptcy, like many of her generation, Mays looked elsewhere to keep moving up. “I had a pretty decent thing going in New York, lived in this cool Brooklyn neighborhood,” she says. She spent years working for Deutsche Bank, rising to the level of vice president for a global division handling major mergers and acquisitions — the dirty work of combining giant corporations, deciding which jobs and assets to cut or keep.

When Detroit’s bankruptcy finally came in 2013, the largest municipal bankruptcy in U.S. history, Mays found herself uniquely situated. Her work experience had put her in positions of handling some messy transactions. This bankruptcy would be one of the messiest transactions in living memory.

“As someone who had worked on these large multinational projects, I know how teams get assembled, and they don’t get assembled thinking things like ‘we should get somebody who grew up there.’ It just doesn’t work that way, for a whole host of reasons,” Mays explains. But she knew she had a unique skill set for the work that needed to be accomplished, as well as a deep personal tie to Detroit. “It felt like what I needed to do was come back and be a voice in the room that was really connected to this place and was going to continue to be connected after all the consultants and lawyers went back to their home cities,” she says.

After advising on the emergency management team charged with navigating Detroit’s bankruptcy, Mays is sticking to her promise. This month, she officially launched Develop Detroit, which will focus on developing real estate outside of the city’s central business core.

“One of the more common refrains you’ll hear from the community development class here is that while it is fantastic that the downtown area, the central business district, is seeing so much investment and has this great momentum, that area represents less than 10 percent of the population, less than 10 percent of the land mass of Detroit, and so what is the plan for the rest of the city,” says Mays.

In part recognizing that shortcoming, and in part recognizing the importance of a real estate development team led by a Detroit native, funders that have been extremely active in those central business district areas have opened up their coffers to Develop Detroit. JPMorgan Chase, in the middle of lending or granting $100 million to Detroit initiatives, granted Develop Detroit $4 million for runway capital. Ford Foundation, which committed $125 million to Detroit over 15 years beginning in 2014, provided a $2 million grant to Develop Detroit. Kresge Foundation, with a $100 million Detroit commitment, provided a $1.3 million grant. Develop Detroit also obtained a line of credit from a national bank. (Ford Foundation provides support to Next City.)

“One of our top goals when we were building this, was to launch from a financial position of strength, particularly one that allowed us to hit the ground running, really build a talented staff and get projects going sooner rather than later,” says Mays.

It’s a lesson learned from another recent urban disaster and recovery story, that of the Gulf Coast Housing Partnership (GCHP). GCHP formed in the aftermath of Hurricane Katrina, under the umbrella of the Housing Partnership Network (HPN), a Boston-based, national collaborative of 100-plus housing and community development nonprofits. Develop Detroit also formed under the HPN umbrella. “One of the biggest learnings from GCHP was, if you’re going to attempt to do something housing-based and catalytic in underserved communities, you need to capitalize it well,” Mays says.

In terms of projects, Develop Detroit has three in the hopper.

“We’re focused on what could be best characterized as a handful of probable tipping point neighborhoods. That means with the right concentrated effort and the right level of investment, they tip in the direction of we’re creating a great and powerful neighborhood,” says Mays. “These are crucial neighborhoods that have really good bones, really good infrastructure, really good community, but their fabric has been weakened particularly because of the foreclosure crisis over the last decade.”

One project is an existing market-rate, 50-unit building. It comes with some vacant adjacent parcels, and Mays says there’s enough to do a second building with at least another 50 units. “The financing plan is allowing us to do it in a way that we can bridge a range of income levels in that final property,” Mays says. “We really like mixed-income, we think that’s the path forward for most urban centers.”

For another project, Mays’ knowledge of Detroit history factors in. “A few years ago there was this low-income senior citizens building smack dab in downtown called the Griswold. It lost its affordability protections, was immediately bought by a market-rate developer, turned into luxury rentals and kicked all the old people out. It was very traumatic.” Develop Detroit is taking over a property that’s very similar to that, with proximity to a hot neighborhood, also near to losing its income restrictions. There’s enough vacant land to build some additional new units and add some commercial space, while keeping the affordable senior housing that exists on the property. “It’s us going in and saying there’s a better way to do this, there’s a way to do it where you can keep people in place, you can grow their property and you can integrate it better into the existing fabric,” Mays explains.

Thirdly, Develop Detroit is in contract to take over a failing low-income-unit building that might otherwise lose its affordability protections. “It’s counterintuitive in Detroit, you look at a place where you can buy a $500 home, and you would think there’s no affordability problem here, but to the contrary there’s so few code-compliant, quality rental units available, that the rental prices can be shockingly high. Fifty, 60, 70 percent of someone’s take-home income,” says Mays.

For every project, community engagement is part of Develop Detroit’s model, Mays says. Even more so where there might be some commercial or community space that Develop Detroit would like to see a strong community partner take up. “We generally start by having conversations with, if not a robust stakeholder group, another community partner. Sometimes an organization like Live 6,” she explains. “That allows us to have more of a community-based, bottom-up approach, where we’re partnering with the local neighborhood CDC. They know what their community wants to see, they know what the needs are, they know where the opportunities lie, and we just over lay our technical expertise on top of that.”

When it comes to community engagement, Mays’ time on the emergency management team is a double-edged sword. While she admits the fresh memory of the state government seizing control of their city still polarizes people, being in that position allowed her to meet so many across Detroit, and across different sectors. It even taught her something new about government itself.

“It was my first stint in government. I didn’t appreciate how much of a quarterback these municipal and state government positions can be. You end up meeting everyone,” she says. “I like to say that I got lucky because I came back home for one purpose and ended up rebuilding a pretty robust network here in Detroit that’s cross-sectional, cross-functional.”