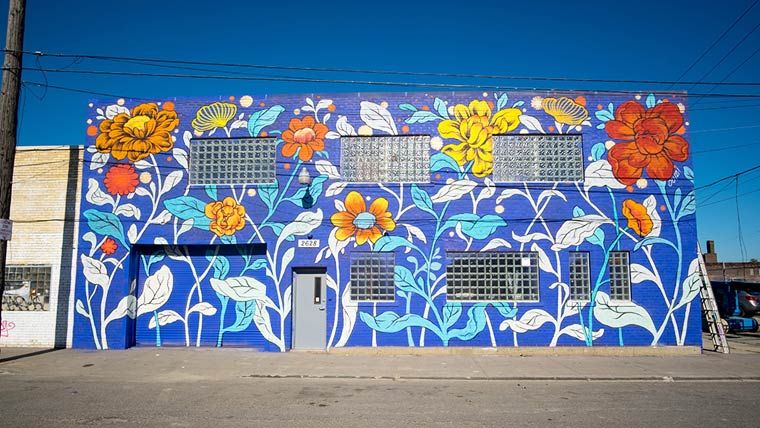 Detroit mayor Mike Duggan has a complicated history with street art. In 2003, as a Wayne County prosecutor, he charged a pair of taggers with felonies punishable with up to five years in prison. After he became mayor, the city instituted a strict anti-graffiti program that doled out thousands of dollars in tickets — in some cases, to building owners that had commissioned murals on property they owned.

A new pilot program with a budget of $50,000 aims to fight taggers with a new, less punitive (and possibly more effective) strategy: public art. The program is called City Walls, and it’s led by the city’s General Services Department, the Detroit Free Press reports. It will employ artists to paint murals on city- and privately-owned properties that are perennial graffiti-targets. It also aims to beautify the viaduct in southwest Detroit and includes an initiative that will allow property owners who have received tickets for graffiti to have murals painted on the affected space instead of paying a fine. Artists selected for the first cycle include Phillip Simpson, W.C. Bevan and Louise “Ouizi” Chen.

The city spends over $1 million annually on “blight abatement and graffiti removal,” according to the Free Press. Public art is often used to deter tagging, and while the city can’t be sure it will work, some anecdotal evidence suggests it might.

“Walls that have murals on them don’t get painted over generally — not 100 percent of the time, but 95 percent of the time,” Chen, one of the artists, who also owns a commercial building that is frequently spray-painted, told the paper. “I’m not sure how it’s going to play out in this city in particular because it’s a very large scope to remedy this problem. It’s going to be difficult.”

A career sign painter who’s been working in the city since 2009 also told the paper that he’s never had to go back to clean up walls he’s painted, adding that some of them “have been major problem walls.”

One inspiration for the program was Philadelphia’s Mural Arts project, which launched in 1984 when graffiti writers were asked to “redirect their energies into constructive public art projects.” More recently, the program has been involved with projects that take on issues like equitable park design and the 2016 presidential election.

But the question of what is “public art” and what is “blight” (and who gets to say) of course raises other questions — of economics, race and class. In Detroit, Duggan has a particularly strong legacy of criminalizing graffiti, as the Free Press points out: “When asked if the new City Walls program marks a change of heart for Duggan’s approach to graffiti, media relations director John Roach noted that there is a clear difference between sanctioned and unsanctioned artwork.”