Detroit: Palladium Boots and the Campus Martius – Next City 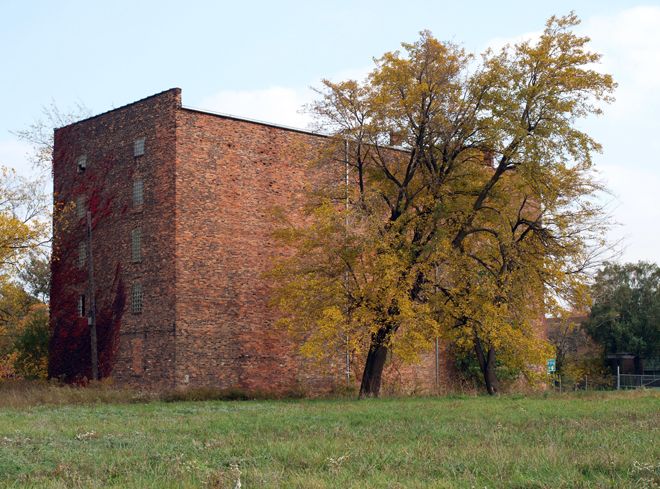 After discussing my trip to Braddock, Sam asked if I had come across Palladium Boots’ web videos, starring Jackass’ Johnny Knoxville, which highlight DIY revitalization efforts in the Motor City. I hadn’t at the time, but watching them later was quite instructive. It’s essentially about “hipster” Detroit, Sam told me, and he would be very right. While the dress-code was cool enough, these young adults’ willful ignorance of policy issues, and willingness to contradict themselves in a very public setting was the most hipsterish—if we insist on using this as an epithet—thing about the videos.

Much of the conversation in the videos, which an ever-present logo on the upper-right-hand corner reminds us are advertisements for Palladium Boots, at least at the beginning, is about how journalists tend to only cover the negative aspects of life in Detroit, like photographing the ruins, but that—due to its abandonment, because of these ruins—you can do a lot of cool stuff here, like open a DIY art space in an old office building. So really, you see, it isn’t all that bad. Hey look, an urban farm!

If we consider this hipster- and artist-led revitalization of decaying urban areas to be a way forward—and Braddock seems to suggest as much—then a couple of points in the video are worth examining, to better understand how the realities of urban planning and policy can get in the way of all this DIY fun. At a couple points, young adults featured in the video boast about how Detroit’s emptiness makes it a blank canvas for opportunity—your presence is felt better in Detroit than in New York. Incidentally they also point out that Manhattan, along with San Francisco and Boston, could fit inside of Detroit’s city limits, with room to spare. At another point, Johnny Knoxville asks his hosts, a band called The Dirt Bombs, if he is on a freeway, because the city street he’s driving on has six lanes. Zach (or was it Zak?), from The Dirt Bombs, tells him, “This is f—kin De-troit, man! This is how we do it! We go three-four [lanes] deep in the city, man, this is how we do it.” Ko adds, “It’s a car town. It was built for cars, built by cars.” Their unforgivably stupid answers deflect the bite of Johnny Knoxville’s keen observation that something is not quite right here in Detroit, when you find yourself alone on these six-lane expressways that are supposed to be city streets, surrounded only by varying degrees of blight and abandonment. Were Knoxville a more policy-oriented dude, he might have asked Zach and Ko if they thought there was anything problematic about this urban design, by cars, for cars.

The problem with the DIY ethos is that it seems to ignore the very real problems in Detroit in favor or a bootstraps ethos that strikes me as myopic, and often flat-out blind to issues of privilege—just because you can see cool bands play at cool venues, it doesn’t mean everything will be OK. Everyone would like to see Detroit recreate itself from the inside, but so long as the city cannot even afford to tear down abandoned buildings—both bungalows and high-rise housing projects—with their own shrinking tax-base, it doesn’t seem likely that any meaningful salvation can come completely from within Detroit, especially from a population that considers Detroit’s problems to be advantageous.

More importantly, its abandonment and its size seems to be very interrelated problems.

In official city literature, the Campus Martius is billed as Detroit’s Gathering Place. I imagine it’s supposed to have a double meaning, as it is a public plaza in the center of downtown and it is also is the point where many of Detroit’s main radial boulevards all meet: Woodward Ave, Michigan Ave, Fort St, and an offshoot of Gratiot Ave. Nowadays, it’s mostly the boulevards that meet there, and little else. The only significant gathering of people I encountered there was a crew of construction workers who told me, after spotting my Giants jacket, that the Rangers were going to win the World Series. Shows what they know.

More interestingly, the Campus Martius shares a name with a much more famous, much more impressive Campus Martius—the military grounds of ancient Rome, which were also home to the Parthenon. And not to drag the Eternal City into this conversation, but I think there are some parallels worth examining here, and could hint at a possible way for Detroit to deal with vacancy, if only we had the political will.

Rome, at its peak during the 2nd century AD, had a population of 1 million. Rome would not again reach this peak until around the Second World War. At its nadir in the Middle Ages, Rome’s population dipped as low as 10,000, by some estimates. Before I risk overstating the similarities here, let’s make the vast differences clear: Rome took almost 1000 years to empty out, and Detroit took only a few decades; Detroit is about half of its former size, and medieval Rome was one-tenth its high-water-mark, and one-twentieth its current size.

In his essay on the city of Rome in The City in Mind, James Howard Kunstler talks about the abitato and the disabitato—the inhabited and uninhabited sections that the city divided itself into after the Decline and Fall. Still, to this very day, the ruins of the Forum occupy the heart of the city. Rome’s Campus Martius made up the abitato, the new city center, where Romans gathered after repeated barbarian attacks. Like in Detroit, people stole building materials from the disabitato. Only, instead of selling them to scrapyards to end up in a Chinese skyscraper, medieval Romans used these bricks, grilles, and the like to build their city anew.

The important difference here—among many, admittedly—is that there was a distinction between places Romans did live, and places Romans did not live. In Detroit these days, everywhere seems to be abitato and disabitato all at once—there were even squatters at the Brewster-Douglass low-rises—presenting a problem for virtually every kind of private or public investment imaginable: public transit can’t operate in such low densities; new housing will be built next to vacant, burnt-out housing and immediately lose value; a restaurant cannot count on foot traffic; even a supermarket cannot operate with such low density—Detroit, as a result, doesn’t have any supermarkets.

There’s no market confidence, is what Sam told me. There’s no way of knowing what’s going to sell, what’s going to be cool (if anything), and what won’t get burned down in an annual Halloween tradition that must drive City Hall insane (down the street from the urban swamp house, there is a fire-blighted Habitat for Humanity home, not ten years old, that is on Detroit’s long demo-list).

So while the Obama administration is creating smarter federal programs that will respond better to individual cities’ needs—like the TIGER grant that is funding the Woodward Avenue redevelopment—and will avoid abominations like the Brewster-Douglass Homes, and side-effects like Brush Park, they only have the abitato in mind. Could there be something the federal government could do to create a disabitato, too? NSP funds, though Detroit is using them to fund demolition efforts, were actually given out to deal with the foreclosure crisis, not widespread, structural abandonment. The government has no program designed to deal with that, though it is the story of so many cities in the Midwest and elsewhere.

While many localities have taken the step towards leveling blighted and vacant homes, none, to my knowledge, have managed to compel residents to move to areas of higher density, and level empty neighborhoods behind them, even if that seems like the logical next step—if it isn’t, then what comes after all the demolition? A city forever deformed: gap-toothed and pockmarked?

Until Detroit figures out a way to delineate where people ought to live and where they ought not live, they will continue to have these problems. Can the federal government do that? As you can see at the Brewster-Douglass Homes, they’ve done much more politically-difficult and objectively-worse things in the past. Whether the public could stomach another Urban Renewal project is another question, but the fact that we can collectively stomach Detroit in its current state is, without a doubt, terrible.