Looking at Detroit Through Hollywood’s Lens – Next City

Looking at Detroit Through Hollywood’s Lens 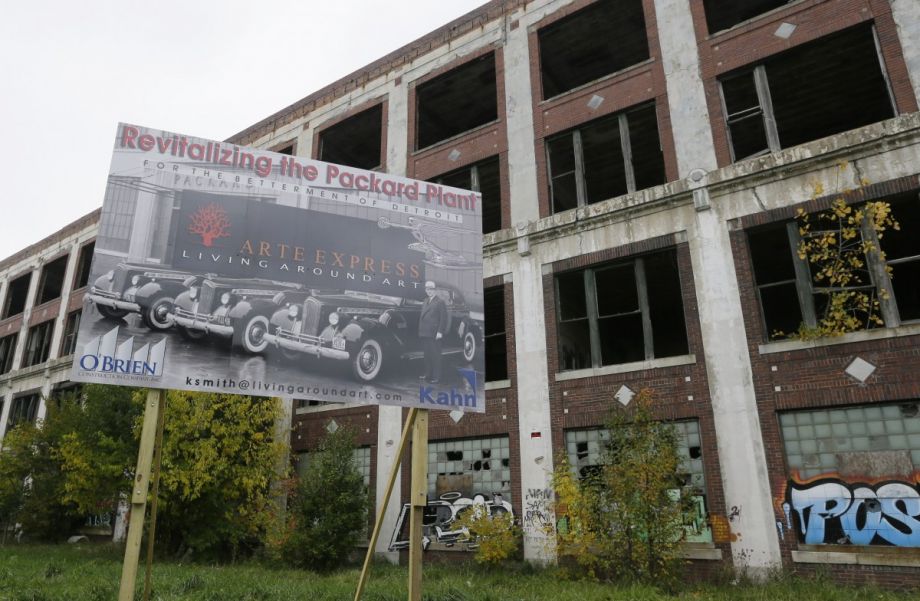 The old Packard plant in Detroit is one setting in horror movie It Follows. (AP Photo/Carlos Osorio)

As many American cities began to be hollowed out by de-industrialization and state-sponsored segregation schemes, filmmakers defined America’s cities as lawless wastelands. Classic 1970s and 1980s movies like Dirty Harry, Taxi Driver and RoboCop show their loner heroes striding through trash-strewn hellscapes, blowing away bad guys. The Warriors and Assault on Precinct 13 are good pulp fun, but they also reflect genuine ambivalence about, and a voyeuristic interest in, the blighted urban landscape. Middle-class flight had created an enormous population of ex-urbanites keen to have their choice to move to the suburbs reinforced on screen. Today, with American cities increasingly favored, have filmmakers taken the hint and changed their mise-en-scene?

“The stereotype of urban blight as a kind of landscape hasn’t changed, although I don’t think it’s as common as it as in the 1970s and 1980s,” says Daniel Herbert, a professor of media culture at the University of Michigan and native of the Detroit metro area.

But even if movies about the hell of American cities have become less prominent, there’s one notable exception: Detroit. Thanks to Michigan’s generous state tax credits for filmmakers, and the city’s continued post-industrial malaise, the depiction of Detroit as urban wasteland remains. The reboot of Assault on Precinct 13 shifted locales from Los Angeles to the Motor City. Gotham is no longer a stand-in for the roughest parts of New York — the new Batman v. Superman was filmed in Detroit too. Transformers 4 turned the city into Hong Kong and then exploded it.

Glimmers of a better script can be found among the indies, however.

Numerous indie filmmakers have been using those tax credits too, and though films like the recently released It Follows and Only Lovers Left Alive aren’t shy about showing post-industrial ruins, but the directors have made noteworthy behind-the-scenes comments to defend their use of the setting as an integral part of the work.

David Mitchell (It Follows) and Jim Jarmusch at least seem aware that their movies could be criticized for exploitation of urban blight, which sets them apart from the urban exploitation films of the past. Both have noted in interviews that their works only show a sliver of Detroit and that the vistas of abandonment they depict should not be considered the city entire.

In Only Lovers Left Alive, Jarmusch’s vampire characters have taken shelter in an old Victorian (in the Brush Park neighborhood). They have moved there to avoid people, Jarmusch explains: “[their] view of Detroit is desolate — nighttime and desolation. But that is not all there is of Detroit — our film doesn’t show you the amazing people there, the stuff going on, the interesting activity. But [they are] not part of that.”

In It Follows, the main characters are suburban kids who live in the red-brick ranchers of the mostly white northern suburbs of Detroit. The precipitating incident of the film, where the horror begins, takes place in the shell of the old Packard Plant. During the characters’ sallies into the city, an African-American population passes in a blur through the windshield. It’s uncomfortable — but a realistic depiction of the segregation that mars the sprawling landscape of metropolitan Detroit.

A Detroit scene from It Follows

“The idea of the separation between the suburbs and the city was an important thing to show,” Mitchell told an interviewer. “As someone who grew up in the area, I’d say there are wonderful, beautiful places within the city. I’d hate for people to think that’s the only thing there is in Detroit — I’d just like to say that up-front — but it’s about that separation.”

And apologists for movies like Death Wish or Fort Apache the Bronx could also no doubt argue that depictions of yesterday — of a savage urban world — were just as necessary to tell the stories of those locales at that time. (Fort Apache, featuring a cop-killing sex worker played by Pam Grier, was widely protested for its depiction of the neighborhood, and Mayor Ed Koch denounced it as racist). After all, Manhattan once did suffer from high levels of street crime and the South Bronx was a national poster child for blight and violence.

But the way these movies depicted cities were as uniformly decrepit and degraded spaces: Neighborhoods where real people lived were utilized as stand-ins for the horrors of The City. There is little that is particular to New York about the exploitative urban movies of the 1970s and 1980s. Gritty urban films of today — the recent Batman movies, for example — still take place in that same mythical cityscape, regardless of the fact that crime has declined everywhere and poverty is just as likely to finds it home in the 21st century’s suburbs as its cities. “The appeal of these movies, then and now, is almost prurient—a romanticized fascination with urban violence and the mean streets where it took place…consumed from a safe suburban distance,” notes Steven Conn in his book Americans Against the City.

Filmmakers like Jarmusch and Mitchell, who aren’t trying for mass appeal, can anchor their films in a place. It Follows is in part a parable of sheltered middle-class suburbanites realizing that danger isn’t confined below 8 Mile Road. Only Lovers Left Alive is about the temporary nature of all human accomplishment and our disinclination to cherish, appreciate and protect what we have built; Detroit is used as the physical embodiment of our fleeting attention span and brutish sensibility. It is also about the possibility of rebirth: Tilda Swinton’s character notes, looking at the rusting hulks around her, that Detroit “will rise again … There’s water here. And when the cities of the South are burning, this place will bloom.”

Whether blockbuster movie exploitation or a more careful exploration of place from an independent director, Detroit may not have to contemplate its big-screen image much longer. If Governor Rick Snyder has his way, Michigan’s tax credit for filmmakers will soon be gone, and only those who really want to make films set in the city will still bother.