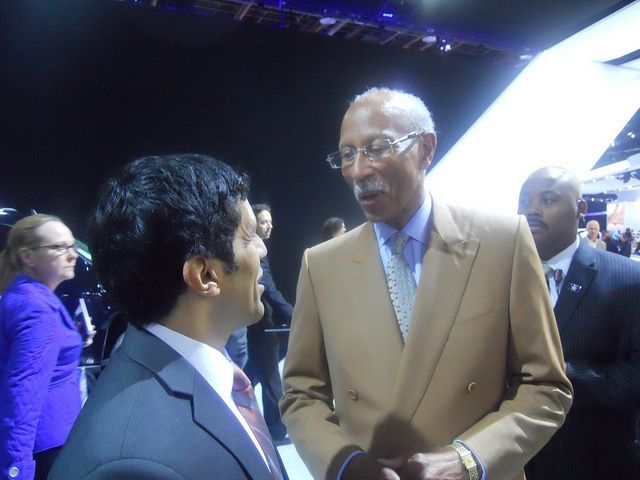 For what was likely his final State of the City address, Detroit Mayor Dave Bing spoke Wednesday at the Detroit School of Arts, a high-performing public school in the city. Administered by arts and philanthropic leaders, it has operated outside the school district this year.

The setting seems like an auspicious choice: Bing’s speech called for a prosperous Detroit following a difficult era that hit its nadir in 2009, when he took office, and is now in constant threat of emergency financial management.

“Like many Detroiters, I too am a fighter,” Bing declared. “We can’t and won’t give up on our city.” But at the same time, the mayor said, the city needs help from anyone with the power to give it.

To that end, Bing sang a song of collectivity in his direct, mild-mannered and uncharismatic style. Championing the idea of “working together,” Bing spoke of progress in terms of partnerships, crossing both public-private and city-suburb lines. Notably, Bing celebrated the state legislature’s creation of a Regional Transportation Authority. The December win represents a major breakthrough for the city — coming after dozens of previous efforts failed — that will, Bing said, “put Detroit on track with other major cities that have mass transit systems.”

But partnerships aside, Bing spoke sharply about the worth of Detroit’s self-governance. With Michigan Gov. Rick Snyder making public preparations to bring in a state-appointed financial manager to control Detroit, and with a key state review of the city’s finances coming later this month, Bing made sure to affirm the grim success of independence.

“Despite the naysayers’ predictions, there have not been any payless paydays,” Bing said. “No emergency manager to date. And no declaration of bankruptcy for the City of Detroit.”

He noted that said he inherited a $332 million deficit, and that the city is currently working under a consent agreement with the state as it works to improve its finances. Snyder has confirmed that, in case Detroit falls into bankruptcy, he has recently interviewed candidates for emergency manager.

Among the dozens of business, community, civic and philanthropic leaders thanked by Bing in his speech, Snyder wasn’t one of them. The mayor challenged the reduction in state revenue sharing — $700 million over the last eleven years. It is a striking number when set against the city’s current $327 million deficit. “Last year, we received $93 million less than in 2009, when I took office,” Bing said, later adding, “It is clear that if Detroit had received its agreed-upon share of revenues from the state, our financial picture would not be as grim today.”

Beyond addressing the specter of a state takeover, Bing spoke optimistically about investments the city and its partners will make in the coming year in improving public infrastructure, fighting blight and creating jobs. While all the initiatives hinge on public-private partnerships — some of them newly created to take over control of city systems — the mayor was careful to underscore that ownership of city assets will remain in the hands of City Hall. He emphasize that “Detroit residents” will play important roles in these new authorities, including a new Detroit Public Lighting Authority that could invest up to $160 million in infrastructure upgrades on the city’s notoriously patchy street lighting.

“Make no mistake,” Bing said, “the City of Detroit will retain ownership and control of its public lighting system. And Detroiters will participate in the decisions on how our city will be lit.” The authority, Bing said, will be run by a five-member board of Detroit residents.

Bing also announced a new private non-profit called the Detroit Blight Authority, which will be “working to eliminate blight, neighborhood by neighborhood, street by street.” DBA is a collaboration that includes homebuilder Pulte Homes, the Kresge Foundation and DTE Energy. It got started last week on its pilot project: The demolition of a 10-block area on Detroit’s east side, near Eastern Market.

Additionally, Bing said the city had outsourced three existing departments. The city‘s Health Department is now the Institute for Population Health, a public-private partnership that, Bing said, “saved $4 million in administrative costs, which can now be used directly toward health services for our residents.” The Detroit Workforce Development Department is now a non-profit, Detroit Employment Solutions, which Bing said cut operating expenses by 20 percent while improving service delivery. And finally, the Human Services Department is spinning into the hands of independent providers. Detroit has further outsourced payroll and benefit functions, which had been run a 25-year-old system.

Bing also claimed the Detroit Future City urban planning initiative as a collaborative success. “This blueprint for the city will live on for years to come,” he said.

The decision to look outside for government for support falls in line with the strategies that have succeeded in the city throughout Bing’s administration. Many of Detroit’s recent economic development wins have come out collaboration with outside partners, such as the powerful local non-profit Midtown Inc.

With homicides at a 20-year high, even as violent crime in other cities declines, Bing dedicated significant attention to policing the city. He noted that the rise in violence coincided, roughly, with the depletion of the city’s police force: There were 3,000 officers on street patrol in 2000, and today there are only 2,000. While suggesting significant restructuring in the police department to increase officers on patrols and in investigations, he again returned to the importance of partnerships for success, speaking of formal and informal collaborations as the key to making Detroit a safe city.

“As I have said repeatedly, the fight against crime must involve everyone,” he said. “Our elected officials, our churches, our schools, our community groups, our businesses.” He also announced a new partnership with state and federal law enforcement agencies to cut gun-related crimes by 25 percent. Details, he said, would be announced in a few weeks.

Economic development and public transit were key points of optimism for the mayor. He offered a laundry list of development deals: Dan Gilbert of Quicken Loans and the Cleveland Cavaliers buying 15 downtown buildings; Chrysler’s $198 million investment in its Mack Avenue Engine Plant, creating 250 jobs; the proposed $650 million sports and entertainment complex that may be new home of the Red Wings; and new Meijers and Whole Foods grocery stores opening this year.

He highlighted the creation of the RTA as the linchpin in obtaining $31 million federal funding for a new 3.3-mile light rail corridor along Woodward Avenue, a major commercial street. Construction is scheduled to start this summer and be completed in 2015.

“Detroit is finally getting a light rail system, nearly six decades after the City‘s last streetcar was replaced by a bus,” Bing said. He also spoke of DDOT, the city bus system, much maligned for late arrivals and no-shows. To offer better service, DDOT implemented a plan guaranteeing a bus every 15 minutes on the city’s four busiest routes, and set up Text My Bus, where riders text to learn the exact arrival time of their forthcoming bus.