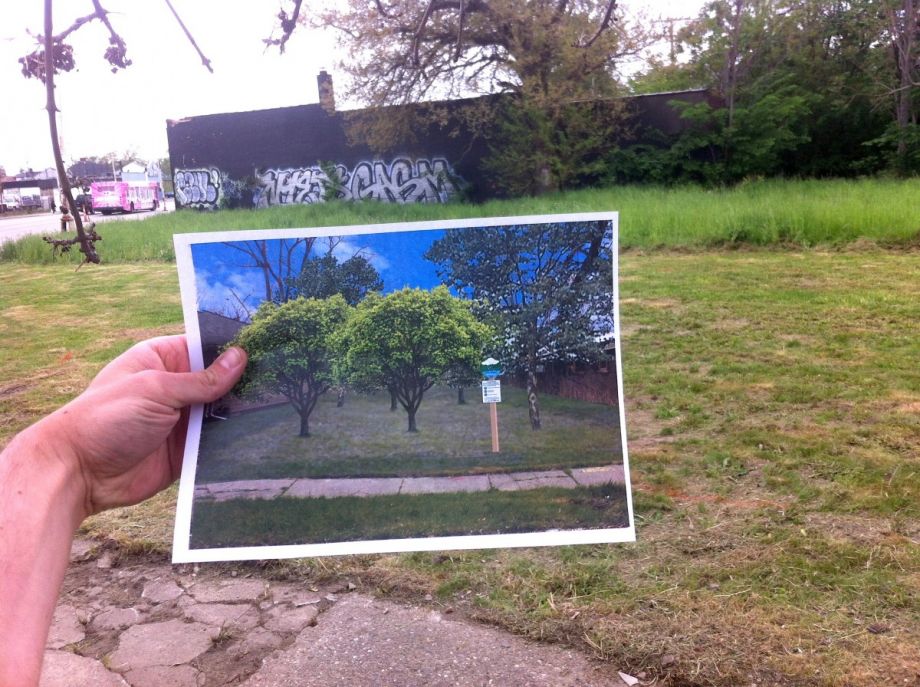 A green infrastructure installation is planned for this vacant lot on the east side of Detroit. (Photo by Matthew Lewis)

The verdure of spring is on full display in Detroit — but so, too, are the challenges of maintaining open land in a fiscally challenged city where over 30 percent of all parcels are vacant. Overgrowth and illegal dumping are not atypical features of many of the city’s 100,000-plus vacant parcels.

In no section of the city are these challenges more evident than Detroit’s lower east side, a 16-square-mile area that stretches from downtown to the city limits, bounded by the Detroit River to the south and I-94 to the north.

Fortunately, the lower east side is one of Detroit’s most organized areas when it comes to identifying opportunities presented by vacant land. The tour introduced participants to a variety of innovative pilot programs that are transforming these liabilities into community assets, from green infrastructure installations to agricultural sites.

Bejma’s organization is an arm of the Eastside Community Network (ECN), a 30-year-old nonprofit dedicated to improving quality of life on Detroit’s east side. ECN was instrumental in the development of the Lower Eastside Action Plan (LEAP), a community-driven project designed to engage residents and put vacant land and property back to productive use. To date, it is one of the most comprehensive plans for any area in the city and has laid the groundwork for the implementation of a variety of green infrastructure and blight mitigation projects.

LEAP launched at roughly the same time as Detroit Future City (DFC), an extra-governmental effort that produced a long-term citywide strategic framework in 2013. Since then, DFC’s implementation office has been busy getting partner organizations like LEAP to align with the framework, which prescribes various land use typologies for different parts of the city. It designates the majority of the lower east side for “innovative productive” and “innovative ecological” uses.

“We’re basically a startup,” said DFC’s Erin Kelly, who led the tour. “Our model is to work through community partners.”

DFC has partnered with LEAP and the Greening of Detroit, a 25-year-old tree planting and workforce development program, to install and maintain 50 green infrastructure elements throughout two square miles of Detroit’s lower east side. A two-year grant from the Great Lakes Restoration Initiative (GLRI) is funding the projects.

The partners hired residents to survey 1,400 vacant parcels using a novel approach that differentiates among types of vacant land in Detroit: Classifications ranged from “grasses” (a parcel where only grasses — not woody plants — are growing) to “pangaea” (a group of contiguous parcels featuring mature clumps of trees with lawn underneath) to “phragmites/French drain” (a parcel featuring a stand of reed plants that indicate where the basement of a demolished house might have stood).

The categorization helped the GLRI partners identify the best sites for green infrastructure projects, as well as the best type of green infrastructure for a particular parcel. They also engaged with Lawrence Tech University to develop an aboveground irrigation system to test the efficacy of stormwater mitigation.

GLRI is just one of many vacant land management strategies at work on Detroit’s lower east side. Land, Inc. is exploring the potential of cultivating pennycress, a low-maintenance crop that can be used in the manufacture of biofuel, on sites along Mack Avenue. A half-acre pilot site planted last year yielded 1,500 pounds of pennycress seeds. To reach a breakeven point at which the cultivation becomes profitable, roughly 300 acres will have to be planted.

Hantz Woodlands is another vacant land management strategy making its mark on Detroit’s lower east side. Scattered across 1,900 non-contiguous parcels in a 140-acre area, the woodlands are a pet project of John Hantz, CEO of a billion-dollar investment group and a resident of Detroit’s historic Indian Village neighborhood. His plan is to plant tens of thousands of trees throughout the area. Earlier this month, volunteers installed 5,000 trees on Hantz-controlled parcels.

While the installation of green infrastructure may seem like the simplest way of addressing the challenges of vacant land, it’s more complicated than it looks.

“Green stuff is a challenge,” said Bejma. “It requires a lot of maintenance, and in a lot of cases there’s no policy to support it, including the master plan.” For instance, bureaucratic issues and a lack of policy resulted in a 10-month saga of Land, Inc. seeking city approval to install bioswales next to its pennycress pilot site. The challenges do not end after city approval. When the tour group visited a lot primed by the Greening of Detroit for an install, the first thing they saw was a pile of brush. According to a representative of the Greening, it was dumped there just 15 minutes after the lot had been cleared.