How Detroit Taught Itself to Demolish Vacant Houses Safely – Next City

How Detroit Taught Itself to Demolish Vacant Houses Safely 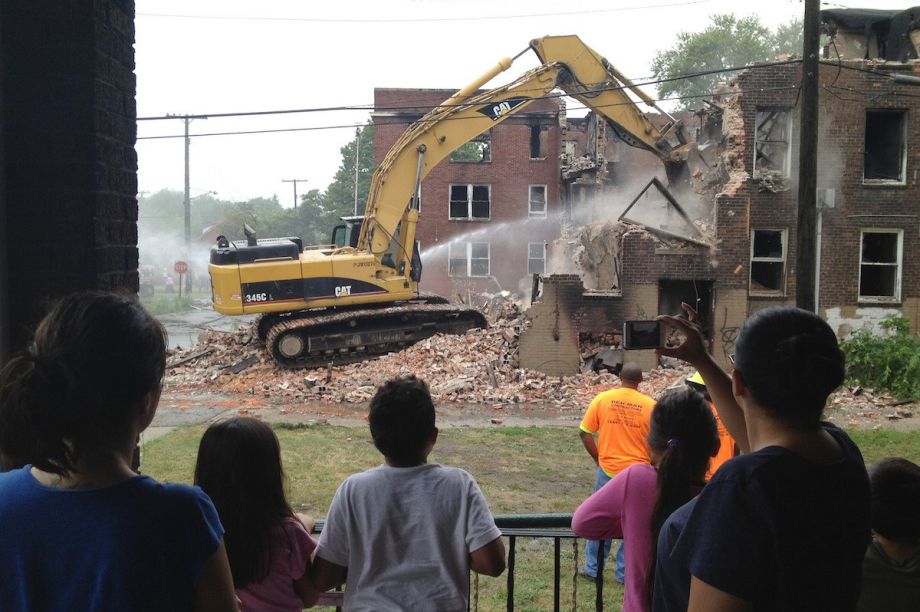 “It kind of used to be like the Wild West a few years ago,” Regina Royan recalls, thinking back on how buildings were being demolished in Detroit prior to 2014. The old norms, she says, lacked oversight.

“We realized that there was really no [fill dirt] testing that went on beforehand,” says Brian Farkas of the Detroit Building Authority. “Think about that. We were about to undertake the largest demolition operation probably in the country, if not the world, and there was kind of an honor system on the type of dirt we were putting in the holes. Immediately we were like, ‘That’s not going to fly.’”

Farkas and Royan, an epidemiologist in the city’s department of health and wellness promotion, were part of the team that developed Detroit’s current demolition standards, which have been in effect since last year. The EPA, in a statement to the Detroit News, complimented the new procedures last September: “Having completed a major overhaul of the demolition process, Detroit’s new demolition practices balance speed, cost and environmental performance.”

Considering the city’s public health concerns, the standards, local officials explain, simply had to be that way.

From 2008-2010, Detroit’s asthma hospitalization rate was more than triple the national numbers over that time span. The potential dust and fumes from mass demolitions naturally make the city wary. (The Detroit Blight Removal Task Force has recommended that 40,000 buildings be razed.)

And then there is blight itself. A comprehensive review of blight literature published last month by Econsult Solutions noted that with increased incidences of fire and crime and the psychological impacts of diminished public safety, something as simple as unkempt vegetation can disrupt ecosystems and aggravate allergies. The report also indicated a link between mosquito-borne diseases and damp trash found on vacant properties.

To develop the new standards, the Detroit Building Authority brought together a best practices working group that met biweekly. Various health and environmental agencies, including the Michigan Department of Environmental Quality and the EPA, were represented. Construction experts were brought into the fold too.

Royan sees their planning process as progressive, “I think [Building Authority Director] Dave [Manardo] really took a risk doing it so different,” she says. “Folks from health are seen sometimes as adversarial — normally it’s in a regulator kind of relationship when you think about redevelopment. Sometimes, we’re not always sitting at the same side … .”

Farkas says it took them about six to eight months of conversations. He describes sessions where contractors would explain Tier 4 — an EPA-stipulated clean emissions category for diesel equipment — to those concerned about pollution risks directly. “It was this learning experience for everyone around the table,” says Farkas. “Not just saying we have to have fast demo or high environmental standards, but we really can do both.”

Under the new system, a pre-demolition review takes place to, among other things, plan out what will be recycled or salvaged. When an excavator claws through a building, a water truck or fire hose has to be dousing the structure to inhibit the reach of particulate matter. Holes are fenced off to protect passersby. Neighbors are encouraged to call if they see something that looks dangerous or improper. The topsoil must be laid so that water will seep through it, a practice that prepares the parcel for runoff.

“We also hired four field liaisons that have the ability to shut a job site down,” Farkas adds. “We suspend contractors that don’t meet these performance standards. It’s not just putting tough language into a document … . We enforce the hell out of our standard.”

In early 2014, roughly 200 buildings were demolished per month in the city. By that summer they quintupled this rate, tearing down some 1,000 buildings per month. Farkas credits this to efficiency measures that the department implemented after talks with contractors. “You’d have one piece of paper for a gas disconnect per address, and one piece of paper for an electric disconnect,” he says. “So if you wanted to demo 20 houses, you’d need 40 pieces of paper.” All approved addresses are on one spreadsheet now.

Slowing down from last summer’s pace, according to the Building Authority, there are currently 150 teardowns happening per week. Detroit plans to raze 4,300 buildings in 2015. Out of this goal, 1,440 buildings have already been demolished.

“The key is planning,” the EPA noted in a statement. “A good work plan can reduce the impacts to the air and water and also ensure that waste and stormwater are properly managed … . Greener demolitions can achieve multiple environmental goals in a timely and cost-effective manner. There is a growing understanding that greener demolition can set the stage for redeveloping vacant lots, job training and community revitalization.”