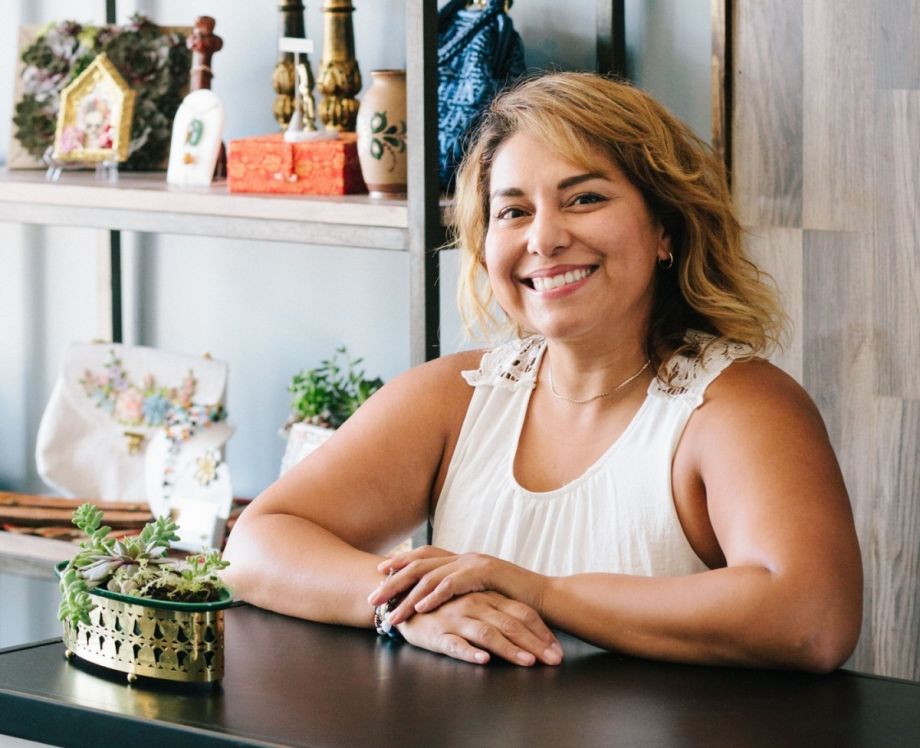 The thought of having to travel to the suburbs to buy a gift for someone down the street from you in Detroit always seemed like the most ridiculous logic to Lana Rodriguez.

But decades of disinvestment and residents moving out of the city has left many Detroiters with an understanding: Shopping means a drive far away from their communities.

Changing that is the driver behind Rodriguez’s boutique, Mama Coo’s, a tiny shop with a curated collection that includes vintage fashion, jewelry, children’s toys and books, and Rodriguez’s works of art.

“The whole business is built around affordability for everyone,” Rodriguez says. “Everyone deserves to have something nice, curated, handmade, without having to worry about going broke.”

Before opening Mama Coo’s last August, the Chicana artist was already selling her pieces — inspired by iconic imagery in Mexican folk art like the loteria game and the painter Frida Kahlo — in a space at an art gallery and at pop-ups at the city’s outdoor Eastern Market.

To take her passion from the pop-up phase to a full-scale retail operation, Rodriguez says she needed to learn to think of her artwork as less of a side hustle and more as a viable business.

Her aha moment came when she enrolled in an eight-week retail boot camp offered by TechTown, a nonprofit business accelerator and incubator. (TechTown was founded in a public-private collaboration by Wayne State University, Henry Ford Health System and General Motors Corporation.)

While headlines tout the demise of brick-and-mortar retail, especially among big box outlets and department stores, there’s still a demand for smaller, independent retailers. In postindustrial Detroit, the city, startup incubators like TechTown and corporations are all finding ways to retrain the historically blue-collar workforce for other fields.

“Yes, the big box retailer brick-and-mortars are shifting, but it’s prime time for independent retailers,” says Sarah Donnelly, director of retail services at TechTown, who points to the strength of niche retailers like record shops, vintage boutiques like Rodriguez’s and high-end wine shops in neighborhoods.

With its sixth class commencing this August, Retail Boot Camp is one of two TechTown projects aimed at giving a diverse pool of Detroit entrepreneurs the tools needed to open businesses on key Detroit commercial corridors. The other is the SWOT City small business program, which assists small retailers in six targeted Detroit neighborhoods (Southwest, Grandmont Rosedale, the University District, Brightmoor, Osborn and East Jefferson) that sit outside of the greater downtown area, which has experienced rapid redevelopment in recent years.

Earlier this year, TechTown won a $1.2 million grant from JPMorgan Chase, which will be used for SWOT City and to expand the boot camp from once a year to twice starting in 2018, says Donnelly.

Candidates for the boot camp are usually a few steps beyond the ideas phase; they might have already done pop-ups like Rodriguez did, for example. Those who have a way to go with concept development are referred to the Build Institute, another incubator that offers a variety of classes in several Detroit neighborhoods.

In the final week of the course, students showcase their businesses during a marketplace event in the TechTown lobby, where residents, potential funders and other entrepreneurs can hear them pitch their concept. At the close of this next class, three participants will receive a $5,000 prize to assist with startup costs.

A more important detail for some TechTown graduates is the fact that each student has access to one-on-one counseling and a professional service network, made up of experts working in legal, marketing, bookkeeping and other specialties.

These types of connections have proven to be invaluable for Regina Gaines, a 2014 boot camp graduate who, along with her two business partners, Terry Mullins and Andrea Dunbar, own House of Pure Vin in on downtown Detroit’s main drag, Woodward Avenue.

Gaines spent more than 20 years building brands in the spirits industry before taking an interest in wine. When the partners started conceptualizing the business, they wanted to create an unpretentious experience for folks wanting to learn more about winemaking.

While the all-women, African-American team brought a wealth of experience to the business, having the TechTown network at their disposal helped cut through some of the trial and error often associated with launching a startup.

“The boot camp prepares you to have the right conversations with the right people,” Gaines says.

Gaines, who grew up in metro Detroit and also spent several years elsewhere, including in Houston, New York and Los Angeles, returned to her hometown in 2007 just as the recession started taking hold nationwide. Detroit, however, had been in the throes of economic instability since at least 2004, she says.

“When I came back I was like, oh my god, Jesus, I had no idea of the level of despair, it wasn’t only economically depressed, it was socially depressing,” Gaines says.

The way Gaines sees it, it was that very despair — and the urgency to get out of it — in Detroit that led to a growing startup ecosystem supported by such incubators that would also serve to fuel the city’s comeback.

For Rodriguez, whose Mama Coo’s is situated in the trendy neighborhood of Corktown — which is increasingly being saturated with pricey farm-to-table restaurants, craft distilleries and high-end boutiques — having a place in the community serves as a reminder that the Mexican-American community of Southwest Detroit where she grew up has long been an anchor in the city. When other parts of the city were experiencing disinvestment throughout the 2000s, the southwest side had “taken care of itself,” she says.

Bringing that ethos to Corktown is a huge part of what drives her.