Will “Blexting” Help With Detroit Blight? – Next City

Will “Blexting” Help With Detroit Blight? 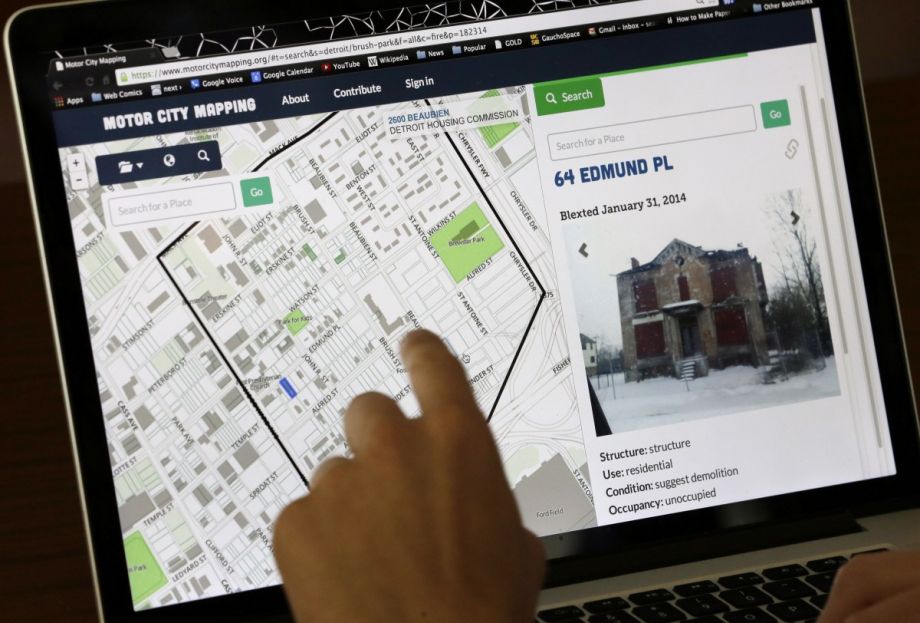 Detroit residents can now use a “blexting” app — short for blight texting — to send photos about derelict properties to a mapping database in Detroit. (AP Photo/Carlos Osorio)

Once, Detroit’s assembly lines and manufacturing prowess made it the nation’s technological leader. Now, an effort to create the most comprehensive digital map of any city in the country is setting the bar anew — at least, if it works as expected.

On the new Motor City Mapping website, you can see an image of every property in the city, alongside a list describing its condition, recent sale price, and whether it is occupied or vacant. With the help of simple and well-designed graphics, this puts a remarkably detailed “face” behind the numbers: 6,255 lots with dumping, 6,845 structures with fire damage, 27,730 structures that need to be boarded up. And so on.

The database of about 378,723 parcels of land is publicly navigable, but it also has a practical civic purpose. The Detroit Land Bank Authority, the one public entity among the four institutional partners that developed Motor City Mapping, will use the site to zero in on blighted buildings, homes and vacant lots, and determine the path toward renovation or demolition. The site was also sourced for a report issued by the Detroit Blight Removal Task Force, a team convened by the Obama administration. (Rock Ventures CEO Dan Gilbert was one of the task force leaders; Rock Ventures is one of the other institutional partners behind the mapping database.) The group echoed Mayor Mike Duggan’s campaign slogan in their report’s title: “Every Neighborhood Has a Future … And It Doesn’t Include Blight.”

The site was built through pure legwork (and $1.5 million in funding by the JP Morgan Chase Foundation). Over nine weeks, in the midst of the most depleting winter in recent memory, street teams went out to gather data and images of each piece of property in the city, creating a digital map of Detroit. “Every day was different,” Sean Jackson told me earlier this spring. He is an executive assistant with Rock Ventures and captained the project. “One hour working with the mayor’s office to coordinate with city departments, the next helping a survey team dig their car out of the snow, finally returning to mission control to help plan the phasing of our survey.”

Local organizations — the nonprofit Data Driven Detroit and Loveland Technologies, a software company that specializes in mapping and crowdsourcing — built a public database. While it is live now, it’s also in constant formation: A Motor City Mapping app will make it possible for users to snap photos of properties and text them to the public database. (They are trying to brand a new word to describe this process — the awful-sounding “blexting.”) These will be quality-checked before going onto the database, and the hope is that users will participate in training sessions before pointing, clicking and sending. Several “blexting bootcamps,” will be held in coming weeks. According to MLive, there is a tendency for over-eager participants to routinely mark a building as being in need of demolition when, in fact, it was structurally sound.

To encourage participation, the Michigan Nonprofit Association and JP Morgan Chase will offer up to $15,000 in mini-grants to organizations that help with this work — though for every dollar asked for, they will be obliged to survey one property. A $10,000 ask would require surveying 10,000 properties before any money is received — a significant expense of time, energy and, probably, gasoline, even though the organizers estimate that each property will take two minutes to survey. No word on whether any money will be deducted if the surveying doesn’t meet quality control standards — if, say, the grant recipients hit “suggest demo” for every property.

Data Driven Detroit and Loveland also plan to train volunteers and community activists to update information about city neighborhoods, and to do comprehensive drive-by surveying once a year. This is how the site is expected to stay active, updated and useful, rather than becoming a stagnant snapshot.

If it works, it will be a new path of communication between citizens and city leaders about the on-the-ground state of Detroit. Jackson described it to the Detroit Free Press as being “the first time the residents of the city and the city itself are going to be using the same set of tools to solve these problems.”

Altogether, this is an impressive venture. But the means should not be mistaken for the end: The worth of any good map is in how it is used. What decisions will Motor City Mapping make or break? Is its information actually as comprehensive and accurate as intended? (When I typed in my current Detroit address, the system turned up no results; when I typed in my past Detroit address, it had an incorrect photo.) Will Detroit citizens actually be better off and more empowered because of this map’s ongoing development? I haven’t yet heard people talking about the project who don’t have a professional affiliation with it. But Motor City Mapping is only one week into its debut. It is a project that has the type of boldness and ambition that the city is hungry for, and it provides an opportunity for whole-city visibility — not just for the more highly trafficked downtown and Midtown. And so, as with so many things in Detroit: We’ll see.