Detroit Works Bike-Share Into a Car-Centric City – Next City 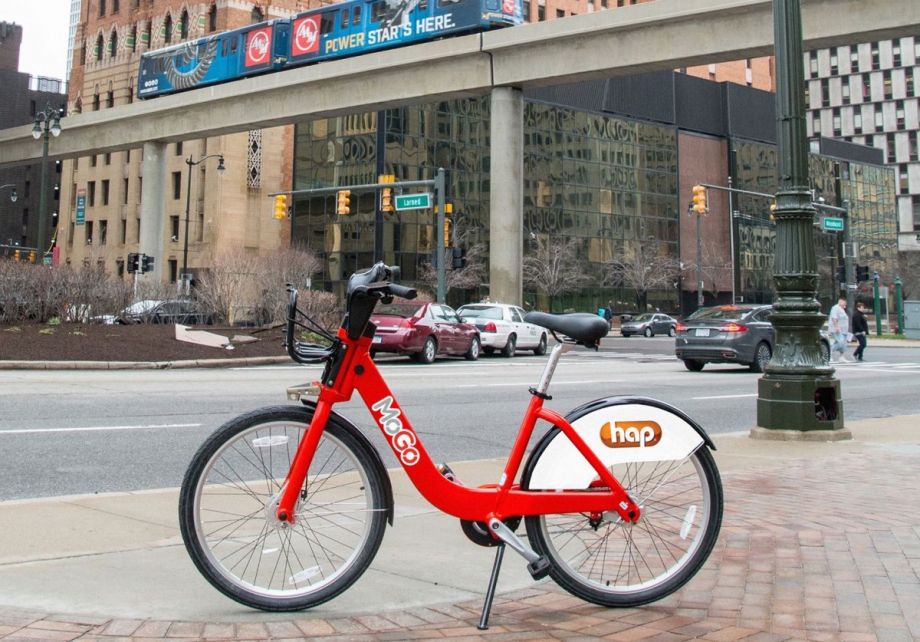 One month after launching, Detroit’s new bike-share system is exceeding expectations and has residents and policymakers excited about its future. MoGo isn’t going to be the silver bullet that fixes all of the city’s transportation access problems — what bike-share is? — but the groundwork has been laid for it to be an important piece of the mobility puzzle in this sprawling, 139-square-mile city. A successful system could also spur investment in cycling infrastructure and change seemingly immutable behaviors in a car-centric town along the way.

Detroit might be the birthplace of the automobile industry. But the city has a long cycling tradition — of the non-spandex, commuting variety. Detroiters were bike commuting before it was cool.

“The vast majority of people ride bikes because that’s their primary source of transportation,” City Councilman Scott Benson, an avid bike commuter who represents the city’s East Side, says. “People usually think of a white hipster on a bike. That’s the image people have, the 22-year-old hipster downtown. But if you look in the neighborhoods outside the 7.2 [Detroit’s rapidly developing core], you see plenty of bikers there.”

With nearly 40 percent of Detroiters living below the poverty line, 26 percent don’t have access to a car. For the many Detroiters you see on bikes, it isn’t a lifestyle choice but out of necessity; it’s the only way around town.

MoGo kicked off with 43 stations and 430 bikes, and as Jason Hall tells it, ridership has been diverse—not just white dudes in ill-fitting suits riding to their job at mortgage titan Quicken Loans. “It’s not just your stereotypical bike rider,” says Hall, co-founder of Detroit’s beloved weekly Slow Roll rides. “It’s the black kid who is off on summer vacation out riding with his friends. Almost like Detroit is a new thing to them, because of the way they get to see it on bike. I think people are just excited to see it here. A new freedom!”

“Where we live now, people can’t afford to drive cars,” Hall continues. “So we can get them to thinking their life isn’t over. But if you can change their perception of that process of saying, ‘man, I’ll just get on my bike,’ it changes the perception of what riding a bike is.”

This isn’t lost on Lisa Nuszkowski, MoGo’s founder and executive director. She knows that MoGo isn’t just about, well, MoGo.

“It’s about having a direct influence on the way we design and use our city streets,” she says. “Adding additional visibility to people who are riding bikes. More broadly speaking, MoGo is something that helps people to think about their own transportation habits. Here in the Motor City it’s easy to jump in the car and drive one mile down the street. We’d like to get people thinking differently about how they move around the city.”

MoGo cannot, and most likely never will be, a transit option for all Detroiters. The city is too big and the logistics and operational costs too cumbersome to have a MoGo station every half mile. Scott Benson knows this. “It can fill a gap,” he says. Nuszkowski knows this. “We just want to increase mobility options in this city,” she says. This is all a long way of saying that policymakers, residents and the folks running MoGo are on the same page. Which is hugely important, especially when it comes to something as polarizing as cycling.

Bike-share works best when it’s dense and walkable. Only certain parts of Detroit — Midtown, Corktown and the central business district — fit the bill. Bike-share in Detroit was never going to be like it is in Chicago or D.C. or New York. Alex Baca, general manager of Cleveland’s bike-share, UH Bikes, has to grapple with the same questions. What can bike-share be in legacy industrial cities like Cleveland and Detroit?

“Bike-share has a sort of veneer. And that’s important for these cities that are trying to figure out what their next move is,” Baca says. “But beyond that you have to figure out what a bike-share system is for your city. My goal is really to personally build something that can replace single occupancy vehicle trips. Even if I’m not getting someone to commute on bike-share. It might lead to them driving home from work, hopping on bike-share, and going to dinner.”

The Motor City, against all odds, actually launched bike-share. Now it needs to build on that momentum — whether it’s adding more MoGo stations, laying down more bike lanes (New York has added more than 300 miles of bike lanes in the last five years, a direct result of Citi Bike’s 2013 launch), or building more consensus for cycling. Bike-share isn’t necessarily the answer or solution everyone wants, but it’s a catalyst for making policymakers take cycling seriously. Even if the majority of people still drive.

“Detroit is just so big,” Hall says. “The stigma around bikes in the Motor City is you grow up thinking as soon as I get my driver’s license I’m done with the bike. First thing we want people to understand is we don’t want people to ride to the other side of town. We need to convince people they don’t need to get in their car to drive three miles. I try to look at it in small increments. If you get a percentage of people in the downtown area to stop driving cars, that’s huge.”