The Meaning of the Detroit Bankruptcy, In Real-World Terms – Next City

The Meaning of the Detroit Bankruptcy, In Real-World Terms 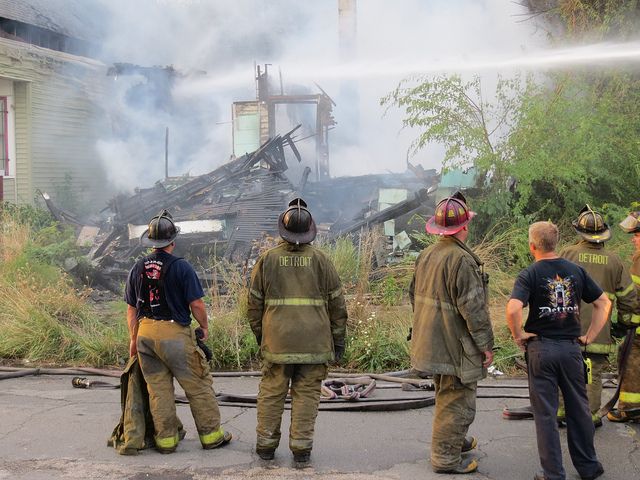 The facts were splashed across the front pages this morning: Detroit, a city that peaked at a population of 1.8 million in 1950, now has 700,000 citizens and a severely diminished tax base. Depending on whom you ask, the city’s long-term debt could be as much as $20 billion. It just filed for the biggest municipal bankruptcy in American history. And there was no other option.

The future of the city is going to play out in a courtroom. Pensioneers will see their payments reduced and retirees could lose benefits. But the meager city services that the city does offer won’t change. City employees should keep their jobs. Life in Detroit will hobble on, business as usual under the busted street lamps.

“I would say there will be no change immediately,” said Lou Schimmel, the emergency manager of Pontiac, a city on the northern outskirts of Detroit. “I’m sure the police are on duty. There’s no overnight change. The changes in services and pensions and so on will happen over the coming months.”

What Happens to Legacy Obligations?

Pensions are arguably one of the largest sticking points. The number one and two unsecured creditors in the bankruptcy filing are the general pension fund ($2.037 billion) and the police and fire pension fund ($1.437 billion). Blackrock argued that Orr inflated the pension liabilities. And you can bet the police and fire department, whose names and home addresses were exposed in the filing, will put up a fight.

“I think Orr’s done a huge disservice to public employees and retirees when he inflated the pension liabilities,” Cate Long, Reuters’ municipal bond blogger, told me. “So that’s going to have to be fought in court. It’s likely, in my view, that a case can easily be made that the actuary that’s been doing work who has been using sound actuary practices will prevail and this process that Orr’s gone through, of artificially inflating these liabilities, will be exposed.”

The pension fund tried to seek a restraining order to stop the bankruptcy filing yesterday, but the Chapter 9 filing beat it to the courthouse. We can say all we want about the irresponsibility of the people in charge, but loss of pensions will change the course of many lives. (My grandmother, the widow of a Detroit firefighter, receives a pension from the fire department.)

“How much [Orr] can cram them down is open to question,” Long said. “There was a case in Central Falls, R.I., where they went into bankruptcy and crammed down the pensioners 50 percent. That was a very unusual situation.”

Bondholders who have secured debt won’t be screwed like the city pensions will. They’ll get some of their money back. And though some people fear that this would give investors in other cities pause, experts have said it’s unlikely to spread elsewhere. Detroit’s problems are endemic and specific to the Motor City.

But the biggest question mark, Long said, is retiree health care. “We’ve had examples in numerous places where it’s just eliminated,” she warned. “And there was some discussion on Orr’s part, a reference to the fact that people can be pushed into Obamacare, and that is something other cities are looking at.” The city of Pontiac suspended retirees’ health care, but increased their monthly payments.

Emergency manager Kevyn Orr only has 15 months left in his tenure. The city is hoping for a rapid timetable, which: good luck. The bottom line today is: Normal operations will continue, city employees will still receive paychecks, pensioners will still have health care and those roughly 40 percent of streetlights that do work will still be on. Once this tumbles through bankruptcy court, services could be cut, retirees could lose their pension and city employees might lose jobs.

But no one knows what the hell is going to happen. Just as every columnist parachuting into the Motor City right now is telling you, America has never seen this before.