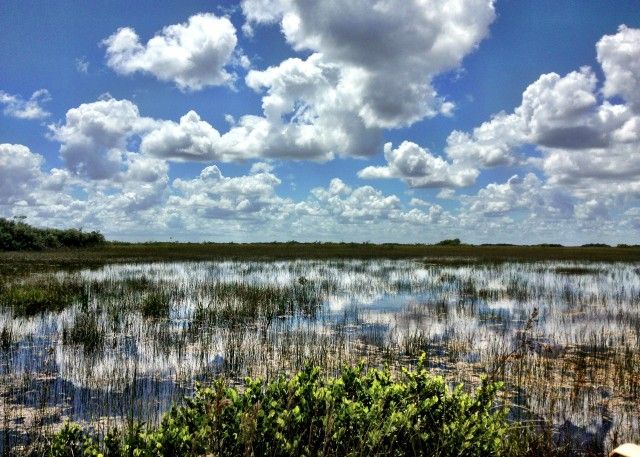 Well over a century has passed since developers started mucking up the Everglades, trying to turn this vast, watery wilderness into a place where people can live and farm as if they were on dry land in Ohio. It has been the site of environmental disaster ever since.

In the 1930s, dikes sealed off Lake Okeechobee, whose seasonal overflow fed the Everglades. Then, after a pair of hurricanes and floods in 1947, Congress created the Central and Southern Florida Flood Control Project, which built a complicated system of 1,000 miles of canals, levees, pumps and other infrastructure. This complex reengineering of the wetlands allowed for sugarcane farming on a gigantic scale, hugely profitable real estate speculation and the creation of the sprawling Florida cities and suburbs we know today.

One-quarter of the original Everglades was set aside in Everglades National Park. But as early as the 1960s, it was clear to anyone who cared that even the protected parts of this unique ecosystem were at risk of destruction. The water flow necessary to sustain them was drying up. Water that did make it into the Everglades was polluted by fertilizers from agricultural runoff, which dramatically altered the delicate balance of the marshes and grasslands.

If only the animals and plants living in the Everglades had been at risk, perhaps the situation would have continued unchecked. But environmental reviews undertaken in the 1990s showed that the deterioration of the Everglades threatened the quality of drinking water in South Florida, and even the entire regional ecosystem.

The people of Florida had drained the swamp so they could live in it, and then they realized that the swamp was the region’s beating heart. If they couldn’t restore the Everglades, South Florida would end up on life support.

In 2000, the state approved the Comprehensive Everglades Restoration Plan. The goal? To restore to the Everglades the flow of freshwater from Lake Okeechobee that currently empties into the ocean. The plan had a timeframe of 30 years and, as of 2009, a projected cost of $9.5 billion.

But the implementation of the plan has proven as complex as the ecosystem itself. As the situation in the Everglades and surrounding ecosystems has continued to worsen, disputes over funding and jurisdiction have stalled the construction of key elements. Meanwhile, the effects of the manmade catastrophe ripple outward, as the polluted freshwater dumped from Lake Okeechobee into the ocean is decimating wildlife in the St. Lucie River Estuary, and in the process endangering the tourist trade dependent on fishing, boating and swimming those waters.

Last week, though, the restoration of the Everglades took an important step forward. The South Florida Water Management District approved the Central Everglades plan, a $2 billion component of the larger plan that would get more water into the Everglades’ “River of Grass” while reducing ocean pollution.

But as the South Florida Sun-Sentinel reports, the Army Corps of Engineers and the water district still have to hammer out the division of labor and cost. The issue of water quality will have to be addressed. And a Congress that can’t seem to get anything done will have to approve funding. Does the political will exist to move forward?

The Everglades were sacrificed so that South Florida could be built into a fanciful vision of air-conditioned paradise. Agribusiness and real estate developers have reaped untold profits as a result. But the human attempt to control this immense and complicated ecosystem has been futile, and if resolution doesn’t turn to action soon, the problems will become even more byzantine.

“We have a unique window of opportunity,” Cara Capp, co-chairwoman of the Everglades Coalition, told the Sun-Sentinel last week. “The Everglades can’t wait.”