Despite Bankruptcy, Development Soldiers On In Detroit’s Downtown Core – Next City

Despite Bankruptcy, Development Soldiers On In Detroit’s Downtown Core 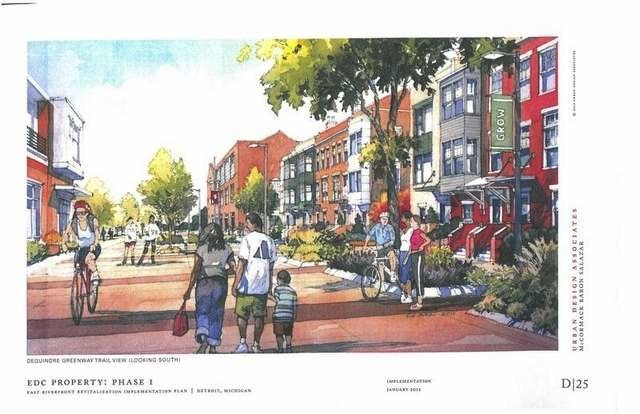 Detroit may have filed for bankruptcy — oh, you hadn’t heard? — but that has hardly scared off developers from the city’s downtown core. The Detroit Economic Development Corporation tentatively approved a deal for a new, $60 million mixed-use project along the city’s riverfront yesterday.

The five-block development, which will occupy land just east of the Renaissance Center, is the brainchild of St. Louis mega firm McCormack Baron Salazar, whose CEO Richard Baron is a Detroit native. Rivertown, as the firm ingeniously named it, is hoping to break ground in the spring, potentially move some tenants in as early as 2015, and finish in 2016.

McCormack Baron Salzar has been upfront about its vision, which looks to be a nice little hamlet along the river for young professionals. There will be 500 units with rents ranging from $800 to $1,800, and retail on the ground floor. I’ve argued here many times about the need for more affordable housing and equity at the neighborhood level, but I’ll give this riverfront project a free pass. Because Detroit needs more people.

It needs them to increase its tax base while it’s on the mend, and if a new development is going to fill up 500 units, that’s a step forward. We hear and see so much about all the abandoned houses in Detroit — especially in the last week with a crush of national media in town — but it’s actually fairly difficult to find a place in Midtown or Downtown, where rentals have a 96 percent occupancy rate. (There is much to be discussed about young professionals fanning out into the neighborhoods and living among lifelong Detroiters, but let’s just talk about how filling up 500 new units is a good thing today.)

Look, a mixed-use development along the riverfront — the gorgeous 5.5-mile promenade that has had a drastic makeover in the last 10 years — isn’t going to Save Detroit. There isn’t one single thing that can Save Detroit, so let’s quit talking about bailouts and Pittsburgh’s resurgence and eliminating taxes (though I do kind of like that last one) and focus on the small steps that might give the city a chance.

The project is being financed various ways, including a $26.7 million first-position Section 221(d)(4) loan through the U.S. Department of Housing and Urban Development and $6.7 million from the Michigan Economic Development Corporation’s Community Revitalization Program, according to Crain’s. Don’t worry, the firm is not taking money out of the city’s general fund so yuppies can have a view of the river. And it won’t be a spectacle like the new hockey arena.

Moving people into the city proper and employing residents at retail — even if it’s a bougie vegan bakery or a bike shop — will increase the tax base. That’s a hard truth. We can’t ignore the city’s very real and endemic problems like the lack of very basic services and easy access to transit. But we also can’t ignore and dismiss every shiny development that strengthens the downtown core, either.

Right now, Detroit needs residents. And it will take them wherever it can, even if it’s in a cozy little enclave along the river, away from many of the city’s harsher realities.