Redesigning for the Climate, Hospitals First – Next City

Redesigning for the Climate, Hospitals First 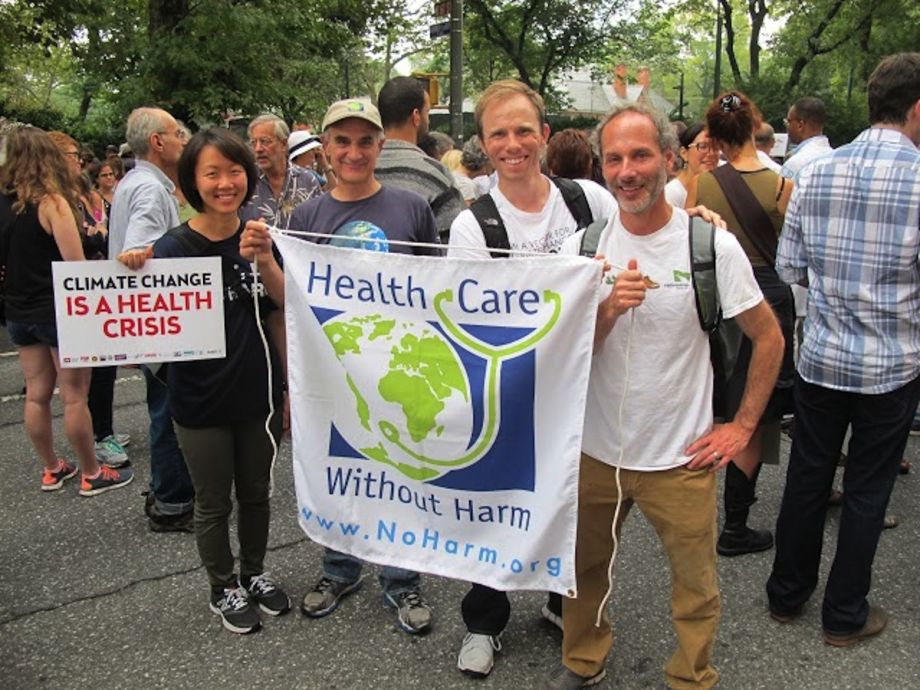 To 2015 MacArthur “Genius Grant” winner Gary Cohen, a hospital polluting — and causing disease through pollution — is an inversion of that healthcare facility’s mission to heal. Cohen founded Health Care Without Harm, an organization with U.S. headquarters in Virginia that seeks to stop hospitals from producing toxic waste. He’s talked one in every five U.S. hospitals into adopting his methods, and this week at COP21 in Paris, he’ll help bring hospitals from around the world together to plan for an accelerating agenda of environmentalism in the healthcare sector. I spoke to him last week about the central role healthcare can play in helping the world cope with climate change.

Tell me about your organization.
Health Care Without Harm works to heal pollution from the healthcare sector, and to mobilize healthcare leaders as advocates for environmental health and justice. Some of our biggest successes include having run a campaign over more than a decade to eliminate the use of mercury-based measuring devices — blood pressure devices and thermometers around the world. And that started with one hospital in Boston … and led ultimately to a global treaty called the Minamata treaty, [which] … phases out all mercury in measuring devices in healthcare by 2020 globally.

When we started the organization in the mid-1990s — we started it in 1996 — in the United States there were about 4,500 medical waste incinerators that were burning medical waste. At the time, the Environmental Protection Agency was reporting that hospitals were the largest source of dioxin emissions in the country. And dioxin, you know, it’s linked to cancer, it’s linked to learning disabilities, it’s linked to reproductive toxicities, it’s linked to endometriosis. So the idea that hospitals were poisoning people in the service of healing people was absurd. And that was the impetus to start the organization. Now it’s less than 50 [incinerators].

We have now created a whole framework for hospitals around the world to basically address their environmental footprint. It’s called Green and Healthy Hospitals Agenda. And there’s thousands of hospitals around the world that are now implementing that and then learning from each other. It’s a 10-point agenda that includes waste, and chemicals, and energy, and food, and purchasing, and green building, and water, and pharmaceuticals. And obviously the big thing, given that we’re just about to head into this Paris climate negotiation, is getting them to address their own climate footprint and getting them to show up as leaders around the policies to protect people’s health and the planet.

Your organization works in a number of countries. How does the work vary from place to place?
In developing countries, there’s still working on some of the earlier issues we took up — so, basic responsible waste management techniques, strategies and technologies, so they’re not dumping waste behind the clinic, or sharps, or just burning it in these kinds of makeshift incinerators, creating more public health problems. In many places in Africa and Asia, we’re working on core medical waste issues and mercury elimination. Once they’ve kind of addressed those issues, there is sort of a hierarchy, and they start to take on chemicals, because they are concerned with exposure, actually for the workforce, because there’s a lot of toxic chemicals in healthcare. … In more advanced places, in Europe, they’re further along and they’re addressing pharmaceuticals and the life cycle of pharmaceuticals and how much pharmaceuticals are ending up in water and places of public drinking water. So it’s kind of in different stages, I’d say. And in U.S. and Europe, the hospitals have taken up the issues of green building — there’s more light, it’s more energy-efficient, safer building materials, those kinds of things.

In some areas, some of the people who are most affected by pollution and waste from clinics and all the rest of it are also people who are extremely poor, in developing countries or cities, like Dhaka, Bangladesh, where pollution is quite in your face. How do you respond to people who are living amid the run-off of hospitals and yet have no access to care?
We started as outsiders, in solidarity with communities that were being impacted by pollution from hospitals. So we’re quite aware of their concerns. And as the organization has grown, it’s focused more on inside, and trying to build a movement inside of healthcare to address these issues. What we’re trying to do is to get the healthcare sector to take greater responsibility for the communities they serve, to take greater responsibility for the planet we all live on. So their mission needs to expand beyond healthcare to essentially community wellness and planetary health. So in that broader framing, we’re saying, “You, healthcare, you need to be the anchor for resilient communities. You need to have on-site power, solar power, renewable power, so that in this next era of climate change, where people are going to be massively impacted, you know, their health is going to be massively impacted, you’ve got to be there to take care of people.”

We launched a challenge to the healthcare sector in timing around [COP21 in] Paris, and we said we’d called this the 2020 challenge. And we’re basically saying to healthcare, you’ve got three really important roles here on climate change — and no other sector has this sort of central role in society. One is around preparedness and resilience. So one can imagine, all across Africa, clinics that are run on solar power and refrigeration run on solar power, you know, vehicles run on biodiesel — things that make the whole system more resilient for those poor people, who have had the least responsibility for the problem and are going to suffer the most. It’s sort of the global injustice of climate change. So that’s one role: designing in resilience.

The second is that healthcare has its own carbon footprint, which is significant, especially in the developing countries. So, you need to lead by example by reducing your carbon footprint.

And the third role, which in some ways is the most important, is [to] be messengers. Be advocates for policy. Say, “Yeah, we need a price on carbon” — and let’s include in that price the enormous public health costs of the fossil fuel economy. We in healthcare are the most trusted messengers in society — let’s leverage that on a policy level.

With the Paris summit, it’s become a little unclear what the overarching impact is going to be. What are you expecting? How will your organization be affected — or not affected — by what does or doesn’t happen in Paris?
We see Paris basically as a leverage to momentum, where the world’s attention will be on climate change. So regardless of the policies that come out of Paris, we are organizing events that are focused on these roles that I mentioned.

So we’re bringing some of the leading hospital systems from around the world together on a roundtable on December 3rd to talk about, how can we as a whole sector globally move the whole sector towards climate solutions in the U.S. and Europe and Africa and Asia? It’s just a moment to build momentum.

Given that China and the U.S. and Europe, Brazil, Australia, even India, are coming forward with their own greenhouse gas reduction plans, it’s starting to create the momentum. We’re seeing that there’s enormous momentum to stop financing any kind of coal capacity. That’s hugely important. It’s critical. We can’t stop climate change if we can’t stop coal, initially, but also other fossil fuel explorations.

You know, I think the really big policy component, which will not be addressed in Paris, is really a price on carbon. Because right now, we’re still massively subsidizing fossil fuels. Massively. I mean, the International Monetary Fund came out with a report earlier this year that said we’re subsidizing fossil fuels more than the entire global healthcare expenditures. That’s just insane. So that has to stop. And we have to put a price on carbon that reflects the public health and environmental damage that [fossil fuel] companies have wrought.

It looks like timing is sort of critical. Would you agree with that?
I’d say so. I’d say that the very mission of healthcare has to change now to address this reality. I mean, you know, there’s a really interesting and disturbing fact that kind of captures this. I guess it was last year [that] the WHO came out with this analysis that said that between indoor air pollution and outdoor air pollution, over 7 million people are killed each year from the burning of fossil fuels. That’s double — more than double — the number of people who die from AIDS, malaria and tuberculosis combined.

And we haven’t even begun to acknowledge that new reality, let alone deal with it. And you think about, how much money, how many efforts have Gates Foundation, the Global Fund, AIDS funds, all that stuff that has gone into addressing these infectious diseases — and there’s nothing, nothing that has been put into address the public health damage from fossil fuels. It’s a totally new reality. There’s a lot of work to do. A lot of work to do. And hopefully we can continue to play a catalytic role in helping the sector wake up to this new reality.