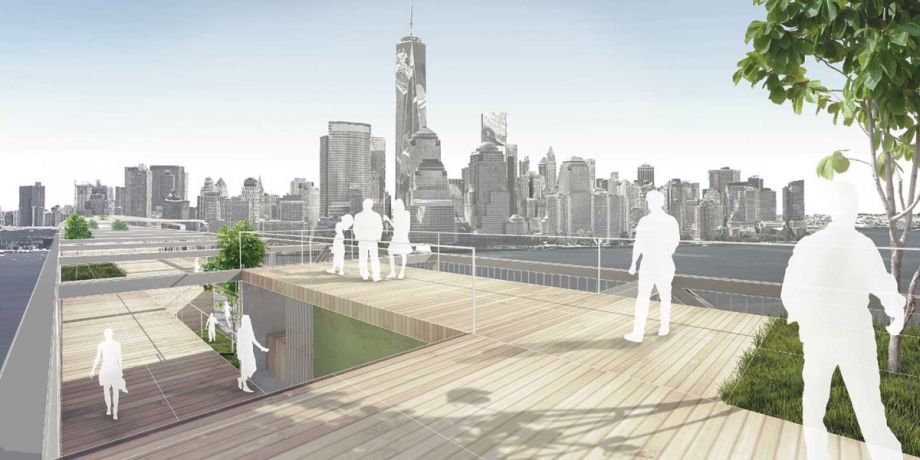 A pedestrian bridge linking Lower Manhattan and Jersey City, New Jersey, may still be farfetched, but a design for one created by Jersey City-based Jeff Jordan Architects just received a stamp of approval from the New Jersey Chapter of the American Institute of Architects, reports Jersey Digs. The Liberty Pedestrian Bridge, conceived of by Jersey City resident Kevin Shane and designed by architect Jeff Jordan, was recognized this week with the AIA-NJ’s honor award for an unbuilt project.

The proposal is a 5,000-foot-long, 200-foot-high bridge that would allow pedestrians and cyclists to avoid the circuitous, increasingly crowded, and frequently frustrating PATH trains. The conceptual two-level span features paths for walking and biking, sweeping views, greenery and seating. The design also includes cafes, retail spaces, solar panels, artwork and free WiFi. The idea is to originate at the abandoned Pennsylvania Railway Embankment in downtown Jersey City, gradually increase in height, and terminate at a higher elevation in Manhattan, with elevators, stairs and ramps to reach the ground.

“The visionary design conceptualized by Jeff Jordan Architects is truly inspirational and speaks to the broad value of architecture, even in its unbuilt state,” said Justin Mihalik, president of AIA-NJ. “Through the power of design, the Liberty Pedestrian Bridge has been transformed from the realm of words and ideas to a concrete vision of the project that can be honed and refined through open public discourse, and whose merits can now be compared with other essential infrastructure projects.”

With roughly 400,000 New Jersey residents commuting to and from Manhattan daily, the idea has largely been met with supportive skepticism. As Joe Pompeo reported for Politico when the renderings were first unveiled last winter, one commenter on the website Curbed wrote, “Nothing is implausible if the economics can be worked out. Put it in the mix. We need more trans-Hudson options. Every crossing is at capacity during the rush — cars, buses, PATH and ferries. I like the idea of a pedestrian crossing.”

But working out the economics is no small feat. Infrastructure experts consulted by Pompeo estimate a price tag in the low billions. Shane thinks one of the big banks or a major corporation would be interested in footing the bill, for “the chance to put your name on one of the prettiest structures on the planet, and one of the most iconic.” But he also recognizes the challenges that come with a bridge spanning a navigable river between two states.

Still, Jersey City Mayor Steven Fulop didn’t dismiss it. He told Politico through a spokesperson, “Some people may think the Liberty Bridge is a crazy idea. But every infrastructure project starts out the same way: as just an idea. We hope that people continue to rally around it, and discuss it, and — if possible — find funding for it.”