Turning to Design to Make Civic Engagement Easier – Next City 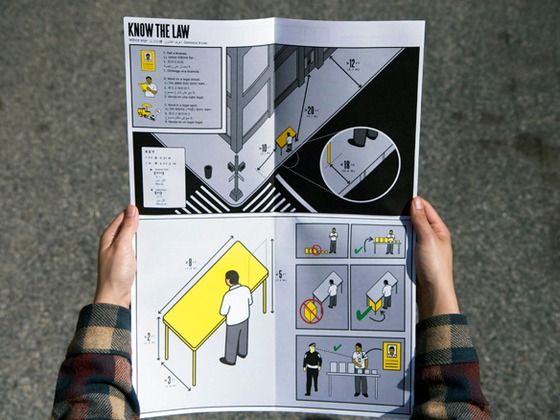 A poster showing where vendors can set up on the street in New York, part of CUP’s “Vendor Power!” campaign. Credit: CUP

Amid the cluttered signage of a New York City subway platform, where sleek Apple ads bump shoulders with Dr. Z’s skin care promises, there are a series of colorfully designed info-posters on the dangers of natural gas drilling. These are the latest collaborative effort from the Center for Urban Pedagogy (CUP), a non-profit devoted to using design to improve civic engagement.

The posters — titled “Don’t Drink and Frack!” — are a part of an extended pamphlet developed by the anti-fracking organization, Damascus Citizens for Sustainability. Using colorful diagrams, the pamphlet will describe in more detail the dangers involved in each part of the natural gas drilling process, from drilling to shipment.

Damascus Citizens for Sustainability is one of four organizations selected by CUP each year as a part of its Making Policy Public project, an ongoing series of slim pamphlets/posters that aim to make public policy issues accessible and coherent.

Advocacy groups are chosen by a jury of leaders in design and community organizing based on policy briefs submitted to CUP, and whether the cause is served by a visual explanation and further civic engagement.

Additionally, the jury is asked to select “groups that are already working directly with a particular constituency so that we know the project is meeting a clear need,” says Christine Gaspar, CUP’s executive director.

Recent projects by CUP have targeted longshoreman and street vendors, for instance. Their last project, “Vendor Power!” explains in stark visuals and multiple languages the specific laws and regulations that affect street vendors.

The issue of hydraulic fracturing is much less targeted to a specific constituency, admits Gaspar, which is why the subway poster was chosen as a medium. “This is the first time we have done a subway ad,” she says, “and it certainly has allowed us to reach a much broader audience with this project.”

Usually, the advocacy group distributes the pamphlet or posters to its constituents while CUP distributes them to the design community, where they are often sold at bookstores or shared online.

The result is a multiple-tiered network of constituents, organizations and designers that are able to leverage one another’s talents and access to constituents.

To expand these relationships, CUP is developing another program called Public Access Design, which will be similar to Making Policy Public but will work within a much shorter time frame. This will allow CUP to respond more quickly to the demands of partnering organizations and their constituents.