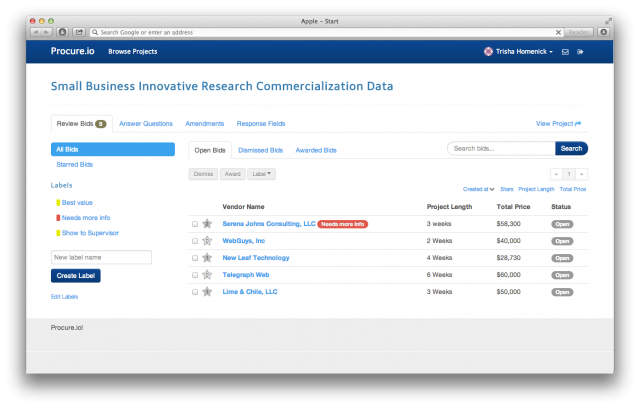 Screenshot of the Procure.io tool. Credit: Department of Better Technology

When former Oakland, Calif. mayor Jerry Brown put his city’s crime data online in 2000, he helped kick off a trend that has since taken root in all levels of government: Using technology to connect citizens with information about the way their city, state or country operates.

A civic extension of the open data movement, the open government philosophy says that information should be freely accessible to all citizens. And it’s grown pretty popular. Just this morning, two different press releases about new open government initiatives — an app about the Oakland city budget and an interactive mapping tool in Philadelphia — have landed in my inbox. Cities like Boston and Philly have their own variations on offices for tech-based innovations. Even President Obama has mandated that his chief technology officer work to make federal data more open.

Problem is, opening up government can get expensive.

That’s why two developers this week launched the Department of Better Technology, an effort to make open government tools cheaper, more efficient and easier to engage with.

As founder Clay Johnson explains in a post on the site’s blog, a federal website that catalogues databases on government contracts, which launched last year, cost $181 million to build — $81 million more than a recent research initiative to map the human brain.

“I’d like to say that this is just a one-off anomaly, but government regularly pays millions of dollars for websites,” writes Johnson, the former director of Sunlight Labs at the Sunlight Foundation and author the 2012 book The Information Diet.

The first undertaking of Johnson and his partner, GovHub co-founder Adam Becker, is a tool meant to make it simpler for businesses to find government projects to bid on, as well as help officials streamline the process of managing procurements. In a pilot experiment, Johnson writes, the pair found that not only were bids coming in faster and at a reduced price, but more people were doing the bidding.

Per Johnson, “many of the bids that came in were from businesses that had not ordinarily contracted with the federal government before.”

The Department of Better Technology will accept five cities to test a beta version of this tool, called Procure,io, in 2013.

In a nod to their commitment to transparency, Johnson and Becker put the inner workings of their new site up on GitHub, a tool that developers use to review one another’s projects.