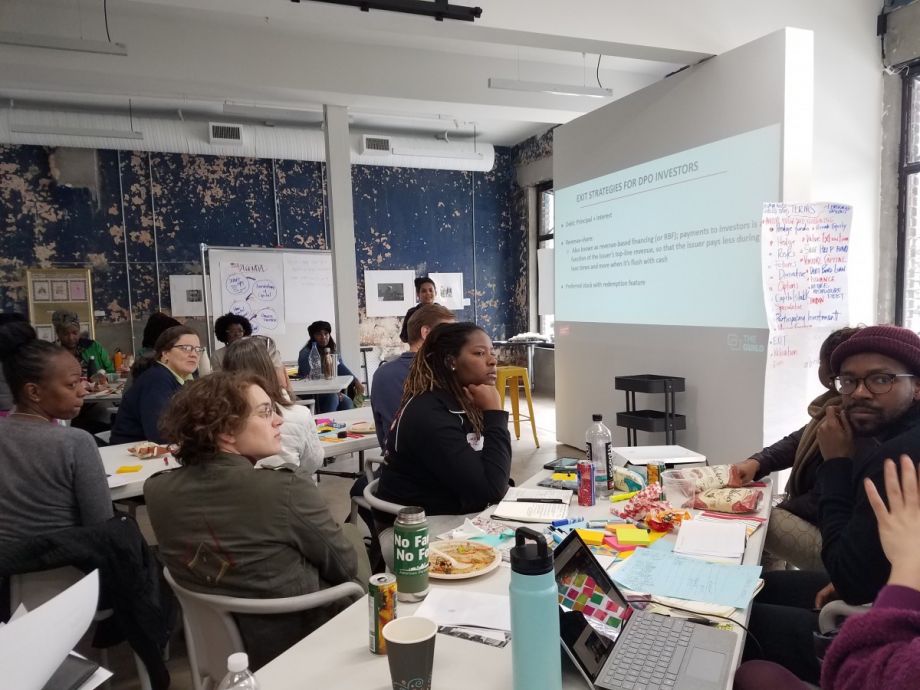 On a February Saturday in Atlanta, about 30 people gathered in a room in Old Fourth Ward, a historically black neighborhood where Martin Luther King, Jr. was born — but also where housing prices there have risen in recent years, leading to concerns of gentrification.

Windows look out upon the neighborhood and residents walking by. In the training room, people smile and talk excitedly among whiteboards scribbled with financial concepts.

Some in the room are social entrepreneurs or work for the City of Atlanta, and others are ministers. Many work for organizations that focus on everything from food to the future of cities. They’re here for the Transform Finance Atlanta Institute for Social Justice Leaders, which took place on Feb. 8 and 9 at The Guild at Awethu House. Session topics include financial actors and acquiring capital.

“Everything has a bottom line, and understanding the power of finance can help to make your goals and dreams achievable, especially for smaller businesses and entrepreneurs,” says Nicholas Forest, project manager and Enterprise Rose Fellow at Quest Community Development.

“Understanding the resources available to us to be able to develop affordable housing in our city and other communities around the world is very important because funding is limited,” says Forest. “It’s like multiple nonprofits going after the same pot of money, and so it makes it hard to achieve affordable housing goals with such limited resources.”

The Atlanta gathering is the first in a series of localized workshops on the intersection of capital and social justice held by the nonprofit Transform Finance. These trainings will eventually teach local leaders in six different cities, with the next ones in Phoenix and Cincinnati. Until now, the institute has usually been in San Francisco or New York City and open to an international audience.

Chandra Farley, just energy director at the Partnership for Southern Equity, says she participated in order to understand how financing renewable energy projects works so she can create opportunities for low-income solar.

She wants to use capital to close that gap so low-income people can more easily access these projects.

“Understanding that capital and finance are tools broke down a personal, internal barrier for me, versus capital and finance being something that I just would never be able to implement or take advantage of,” she says. “While yes, these tools have been wielded in a way that is inequitable and punitive to economically distressed or systematically disenfranchised communities, if I just think of them as tools that I can apply, it just democratized that for me.”

Sophia Gallagher works in education as co-founder of the Library of the Commons, a cooperative learning community and resource hub in Atlanta. She says she wants to learn how to fund that work in ways that don’t take wealth away from the communities being served.

“There’s not models in place that I’m aware of, so I figured understanding traditional finance and transformative finance would be helpful,” Gallagher says. “How do you fund education and learning in a way that’s self-directed and in a way that’s challenging the systems that we find ourselves in is a big, open question that I don’t know how to solve.”

There was also Ross Hegtvedt, who serves as innovation lab manager at the Purple Aisle, an incubator that brings together emerging civic leaders for pop-up innovation labs.

“There’s a question here sometimes of how to fund these initiatives,” he says. “Money underlies almost everything, especially if you’re thinking about new activities or building institutions or whatnot, and because we work closely with elected officials as well, there’s a real interest in designing systems and implementing solutions that are ethically financed and generating good returns not just for investors but also the community.”

Hegtvedt says Transform Finance’s institute taught him about the scale of financialization, when financial institutions increase their size and influence.

“It’s how the finance sector has taken over everything and it sort of has outsize power in some ways,” he says.

“It’s not human scale,” says Grace Kim, an independent consultant working with nonprofits and creative entrepreneurs on organizational development and funding. “It’s not connected to local impact or local actors or even local processes. It’s all very far away from those kinds of things.”

Forest says after Transform Finance’s institute, he now knows more about financing and its associated players and vocabulary. It’s knowledge that he can bring back to his work at Quest.

“It’s a tool, and now it’s more accessible because I understand it,” he says. “Now there’s a clear path of where finances impact you and who those individuals and organizations are that impact what you’re trying to do, so that’s really been helpful.”