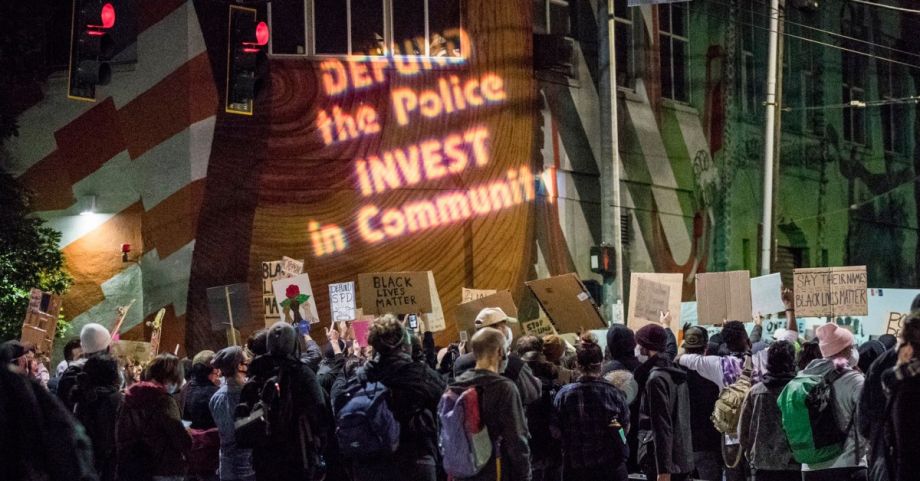 Across the nation for over two months straight, protestors have marched in the streets demanding police departments be defunded in the wake of the deaths of George Floyd and Breonna Taylor. In the midst of this nationwide uprisings, public officials here in New York City recently passed the fiscal budget for 2020 with minimal changes to the NYPD’s budget and process. There are some key lessons other cities can learn about NYC’s fight to defund the police. While some alarmists have tried to reduce these demands to the most extreme interpretation possible, the truth is that reallocating resources away from punitive policing and towards public services would make cities across the country safer, healthier, and more financially secure.

Since the era of Reaganomics in the 1980s, decades of shrinking government, funding cuts, and dismantled anti-poverty programs have left our country’s poor to fend for themselves, while one institution has largely avoided the austerity measures of the past couple decades: the police.

Coronavirus has taken this bad situation and made it even worse. The pandemic has devastated economies and city budgets across the United States and has forced localities to make even uglier cuts to all their departments — except for police departments, which have widely avoided significant cuts.

Here in New York City, officials cut the city’s budget by roughly $5 billion, with after-school education programs, youth employment services, and healthcare facing the largest cuts. City officials tout that the $1 billion budget cut to the NYPD meets the demands of protestors. However, these funds will still be funneled back into the NYPD through various channels and not redirected towards any meaningful public policy measures. In one example of this loophole, school police officers will now move from the NYPD’s budget to the Department of Education’s budget while the same officers remain in schools with no reduction in headcount. These spending priorities are especially absurd considering how the NYPD spends significant chunks of their bloated budget. In 2018 the city paid over $230 million settling cases brought against the police department, usually for cases of unwarranted harassment or violence, and in 2019 officers racked up a whopping $730 million in overtime, $130 million over the city’s budgeted funds. Why must New Yorkers continue to pay for the nation’s largest police force when our city is suffering from a dilapidated and crumbling MTA, underfunded public education, a lack of well-funded public housing and unaffordable housing alternatives, and limited public health services.

As wealthy individuals who know many other wealthy folks, most of our counterparts would agree that our public services are in desperate need of funding and repair, but when you suggest that the money come from the police department’s budget, suddenly you’re talking nonsense. They often jump to the conclusion that a defunded police force would degrade society and incite lawlessness, but this is unfounded fearmongering. The reality is that prioritizing policing isn’t even a good bet if you want to diminish crime.

There’s little to no evidence that increased policing leads to any significant reduction in crime. In fact, in 2014, when the NYPD went on “strike” and stopped engaging in active policing, complaints of major crimes dropped. Just as investors have learnt that investment advisors who are paid more do not perform any better than investment advisors who are paid less, throwing money at the police department does not make our cities any safer. So, if preventing crime is the purpose of the police department, it seems the money is largely wasted. It would be a far better use of the public’s money if their budgets were spent on social programs and decriminalization that show a much larger chance of decreasing crime.

Our wealthy peers need to rethink their priorities. If you run a business, your bottom line is more likely to be hurt by a lack of public services than you are from criminal activity. Spending cuts on social programs can make it harder to find qualified workers thanks to an underfunded public school system, a smaller pool of potential candidates caused by an insufficient supply of affordable housing or transit options, or lack of demand for your products or services due to an impoverished consumer base. Even if you do happen to be the victim of a crime, that crime is almost certainly the result of its perpetrator’s lack of economic opportunity, rather than their desire to engage in criminal activity. People in stable, well-paying jobs rarely commit crimes, because they don’t have to.

If we were to take the money we spend policing the poor and instead spend it on lifting them out of poverty and properly funding the rest of our city, they wouldn’t be the only ones benefiting. Everyone, including rich people like us, ends up better off. Thinking otherwise is letting fear and prejudice cloud your judgment.

A society’s values are expressed by what it spends money on. When nearly every single major American city spends the majority of their budget on policing rather than public goods, it’s clear that we need a change. It’s high time that we demand New York City and other major municipalities stop blowing billions on punishment and reallocate funding into areas and programs that will actually make a positive difference in people’s lives.

Molly and Becky Gochman are both members of Patriotic Millionaires, a group of wealthy Americans pushing for a more progressive tax code and a $15 minimum wage.