Debunking the Myth Of Detroit’s New Urban Forest – Next City 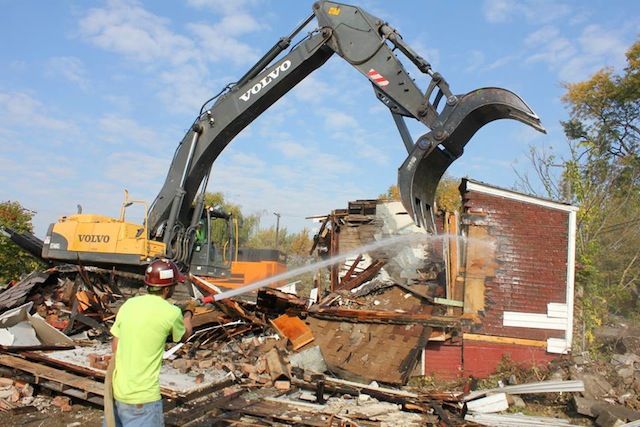 It’s easy for people to let their imagination run wild when it comes to portraying Detroit. With the recent approval of a woodlands project on the city’s east side, the media went bonkers. “A 140-Acre Forest Is About to Materialize in the Middle of Detroit,” reads one headline. “Urban woodlands project launches in swath of Detroit’s east side,” goes another.

But there’s one problem. This whole Mad Max notion of a new urban prairie is a misnomer.

Some background: Emergency Manager Kevyn Orr approved the sale of 1,565 blighted parcels on the east side to Hantz Farms, ending five years of planning and infighting. Critics call it a land grab by a wealthy entrepreneur. Supporters say it’s the kind of progressive land use that will help the city move forward.

One thing is certain, though. Hantz forked over roughly $520,000 for land that, by all accounts, no one else wanted to buy. (The lots had previously gone up for auction, and the owners of adjacent properties had right of first refusal.) Now it will clean and maintain more than 1,500 parcels, in addition to demolishing about 120 abandoned structures remaining on the lots. For Hantz Group, the parent company of Hantz Farms, this is a low-cost, high-reward investment. Like the Whole Foods in Midtown, it only stands to benefit.

As for the mischaracterization of this new urban jungle: Yes, Hantz intends to plant 15,000 mixed hardwood trees. Yes, the woodlands project will have a roughly 150-acre footprint. But all the trees will be confined to a 15-acre plot. The land consists of non-contiguous parcels, which means there won’t be some new forest “materializing” in the middle of the city. Residents aren’t moving, unless they want to. Sidewalks aren’t going anywhere. Nothing will be fenced in. Those 15,000 trees? You can walk under them on a sunny day, if you so please. The east side isn’t turning into the lush set of Jurassic Park. All Hantz will do is clean the trash and mow the lawns, which could help improve public safety.

Moreover, Hantz will start paying property taxes on lots that have been off the city’s rolls for years. Hantz Farms President Mike Score pegged the annual tax revenue at about $60,000. “In terms of tax revenue,” he told me, “this is like a lottery ticket for the city.”

In addition to taxes, it costs Hantz about $350 to clean up each parcel, which comes to a total of $547,750 in savings for the city (if the city were to even consider cleaning up). Score estimates that it will cost $150 in annual upkeep on each parcel, for a healthy total bill of $234,750. That’s a lot of cash the city doesn’t have.

A cleared parcel on Detroit’s east side. Credit: Hantz Farms

There’s no denying that Hantz could turn these 1,565 parcels into a very lucrative farming business. In Mark Binelli’s book Detroit City Is the Place to Be, Hantz CEO and Chairman John Hantz imagined a farm staffed by “ex-convicts and recovering addicts.” But there are no immediate plans for kale and Brussels sprouts and okra. Score said Hantz won’t do anything drastic until it has a better understanding of what will actually work. To its credit, Hantz has been upfront about this being a for-profit enterprise. Score did say it intends to explore more options when the time is right.

“When the trust level [with neighbors] is higher,” he said, “we can move toward orchards and Christmas trees and crops that require more intense management.”

Dan Kinkead, a former Next City Vanguard and executive director at Detroit Future City, applauded this approach to land use. “What Hantz Farms project does for me is it allows us to really reevaluate how we use our land and begin to think differently about this,” he said. “Land isn’t necessarily a liability, but rather a tremendous asset. The utilization of the site can contribute greatly to improving our air quality and how we actually manage stormwater and runoff through green and blue infrastructure.”

Both Kinkead and Score talked about how projects like Hantz Farms will not create jobs. And that’s fine. Policymakers and business owners need to think about different swaths of the city in different ways. “You’re still actively utilizing the site,” Kinkead said. “It’s actually generating revenue for the city. And again, the use there is actually ameliorating past problems that we’ve had.”

Hantz hopes to have all the lots cleared and mowed a year from now. I imagine the scope of the company’s footprint will change over the years, which may or may not drive out residents. As it stands, though, those who do live there right now will have fewer lots filled with waist-high thickets, trash and abandoned buildings. Cleaning up the neighborhood could, in theory, make it ripe for development or preservation. At the very least, Hantz’s upkeep will do something to address public safety. And the city stands to collect tax revenue it wasn’t getting before and watch over 140 acres cleaned without spending a dime.

Whatever the outcome, just remember: It’s not an urban forest.