Dear Copenhagen: Say No to Cars! – Next City

Dear Copenhagen: Say No to Cars! 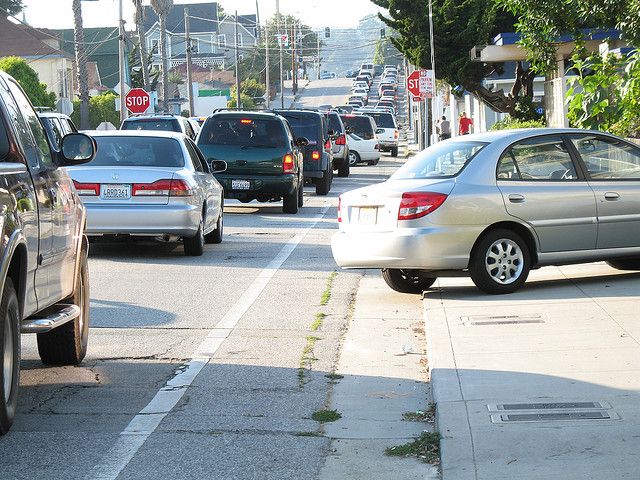 I was more than a bit disheartened to hear that Honda, BMW, Mercedes-Benz and Volvo are sponsors for this week’s U.N. Climate Change Conference in Copenhagen, given the untold volumes of greenhouse gases their products cough into the ether each day. They’re going to be, among other things, carting around conference bigwigs using experimental automobiles that are not all as yet in mass production, and that most of us couldn’t remotely afford if they were. Or, as the official summit website put it, “The vehicles represent a broad range of bets on how sponsors address the climate challenge, including with new technologies and propellants, such as hybrid, hydrogen combustion, fuel cell, biogas, and second generation bioethanol.” Showing off investments in alternative fuels is fine. But they’re also in effect promoting the fiction that a sustainable society can be built solely around the automobile as the world’s population grows in size and density.

Global carbon emissions are up 29 percent since the Kyoto protocol was signed in 1997, reports the U.K.‘s Guardian. Rising sea levels and erratic weather associated with global warming are on a potential collision course with relentless urbanization. There are 136 coastal cities worldwide with populations of more than one-million. Forty-million human beings and $3 trillion worth of property are exposed to extreme flooding, according to an OECD study. Climate change, natural barrier erosion and explosive population growth could put 150 million people and $35 trillion in global assets in the danger zone by 2070. Meanwhile the U.S. accounts for nearly a quarter of the world’s emissions since Kyoto, more than Europe or China. The E.P.A. reports that nearly a third of U.S. greenhouse gas emissions come from transportation, which also accounted for half of our net emission increases since 1990. Somehow I don’t think historians are going to look back fondly at our predilection for S.U.V.‘s as the world approached an immense crisis.

Another thing to remember about history is that when the world is faced with great challenges there are always some people somewhere who fight tooth and nail to prevent mankind from rising to the occasion. Recall earlier this year when Oklahoma senator Tom Coburn wistfully lamented restrictions on the “gas hog.” Or remember when Minnesota’s Michelle Bachmann declared on the House floor that “life on planet earth can’t even exist without carbon dioxide!” Even some supposedly serious urban commentators still cling to the unworkable status quo. The urban affairs website New Geography carved a niche for itself by bucking the smart growth consensus in defense of automobile-centric sprawl. For New Geography’s Wendell Cox, for instance, curbing car-and-freeway planning amounts to bringing back “standards of living and lifestyles of 1980, 1950 or even 1750.”

What about the pollution caused by ever increasing numbers of drivers? For that, science is our deus ex machina. Automotive innovations like those about to be displayed at Copenhagen will get us out of this mess with minimal discomfort. As Cox puts it, technological solutions will allow us to “continue to live our lives as we do now while substantially reducing [greenhouse gas] emissions.” This is akin to jumping out of an airplane with a broken parachute, hoping to fix it on the way down. Excluded from this cornucopian vision are any publicly imposed curbs on “gas hogs,” private jets, excessively large housing, beef over-consumption, mega-construction, oil drilling or any other activity known to hasten global warming. Let alone essential investments in public transit. Instead our suburban society can plod on with its hitherto disastrous misallocation of resources, hoping some random team of scientists comes up with a permanent fix.

Cox and his ideological kin invite a more fundamental question as an urbanizing human race tries to square itself with its natural environment: Why promote automobile-centric cities at all? Four decades ago Jane Jacobs was legendarily keen on how the awkward marriage between automobiles and cities creates barren streets. “Traffic arteries, along with parking lots, gas stations and drive-ins,” she argued, “are powerful instruments of city destruction.” Besides, driving is a vast public health problem. The WHO estimates that road traffic accidents claim more than 1.2 million lives each year. In developing countries—where cities can be particularly chaotic—road traffic accidents are the fourth highest cause of death among people between the ages of 15 and 59 (according to this book), ranking just behind tuberculosis. Any way you slice it, 21st century planning needs alternatives to the automobile.