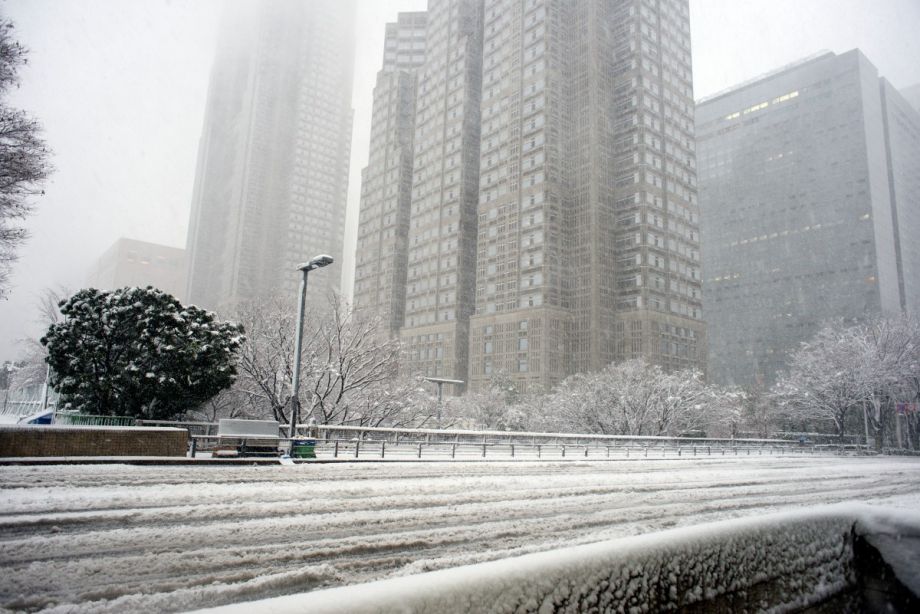 A report released five days before the snow fell in Tokyo said that the average air temperature between September and November 2013 was the highest since 1981. Credit: Wikipedia Commons

On Saturday, Tokyo residents awoke to find themselves “in a strange snow-changed city, in the heart of the Ice Age of an alien world,” to quote a scene from Ursula K. Leguin’s snowbound sci-fi novel The Left Hand of Darkness.

The snow is still piled up in mounds along the city’s narrow backstreets after a highly unusual 10.6 inches fell on Tokyo over the weekend, blanketing the capital in white and causing widespread chaos. According to the Japan Meteorological Agency (JMA) it was the largest snowfall in the city in 45 years, and prompted the JMA to issue its first heavy-snowfall warning for central Tokyo since 2001.

Public transportation was affected on a massive scale, with trains delayed or stopped altogether. At Haneda Airport, domestic flights were suspended, affecting almost 100,000 people, and at Narita Airport, around 5,000 international travelers had to stay in the airport overnight when their flights were cancelled. Bullet trains were delayed or forced to operate at reduced speed, delaying almost 290,000 travelers. Expressways were closed and city streets were clogged with deep slush. Tokyo Electric Power Co. (which manages the crippled Fukushima nuclear reactors) said that about 48,000 homes around Tokyo were without power on Saturday. Across the nation, 11 people died due to the snow, and more than 1,000 were injured.

Extreme winter weather in Tokyo is usually tempered by the Pacific Ocean, but Saturday’s snowfall isn’t without precedent. In 1953, 33 centimeters fell on the city during February, and in 1954, 41 centimeters fell in January, some of the largest monthly snowfall totals over the past 60 years. According to the JMA, the average yearly maximum snow depth in Tokyo was two inches for the years 1981 to 2010. News sources frequently referred to yearly averages such as this in their reports on the recent heavy snow, but snowfall in Tokyo is difficult to characterize with a simple average. In 2006 a “rare” snowfall of 3.5 inches left almost 24,000 passengers stranded at the city’s two airports. A year later, there was no snow at all, and 2009 was also a snowless year. Then, in 2010, snow fell in Tokyo in mid-April, the latest snowfall in 40 years.

Tokyo is built on Japan’s east coast, its suburbs extending westward into the Kanto plain and ending in a mountainous area. This area, in central Japan, experiences a yearly snowfall that dwarfs what Tokyo receives. Last year a record-breaking 18 feet of snow fell in some areas of west and northwest Japan. Buildings collapsed under the weight, and on Tateyama Alpine Route in Toyama cars and buses found themselves driving between 50-foot cliffs of snow. These areas have a half-century of preparedness experience, however. In December 1964, the Institute of Snow and Ice Studies was established in Niigata in northwestern Japan. Roads in these regions feature warm water sprinklers to remove ice. Building codes, infrastructure and policies take snow into account.

In Tokyo things are quite different. The low yearly snowfall means that it’s not economically feasible for the city to invest in heavy-snow preparedness, which accounts for the widespread chaos at the local level. But considering the dwindling snowfall over the past 15 years, one can understand why Tokyo hasn’t invested more in such emergency planning. Indeed, the city isn’t preparing for colder weather — it’s preparing for heat.

A report from the JMA five days before the snow fell in Tokyo said that the average air temperature between September and November 2013 was the highest since 1981. The report went on to say that “each of the 13 years in this century ranks in the warmest 15 years since 1891,” a shift caused by “the combined effect of the global warming trend due to increase in anthropogenic greenhouse gas concentrations including carbon dioxide, and decadal natural fluctuations intrinsic to the earth’s climate.”

So yes, Tokyo is preparing for extreme weather: Sweltering summers and a wetter rainy season. In a 2013 report, it topped a list of cities identified by Swiss Reinsurer Swiss Re as most affected by extreme weather. Swiss Re has said that it expects another major weather event in one of Asia’s megacities, “and the impact will be terrible.” Snow, however, wasn’t on the list of events.