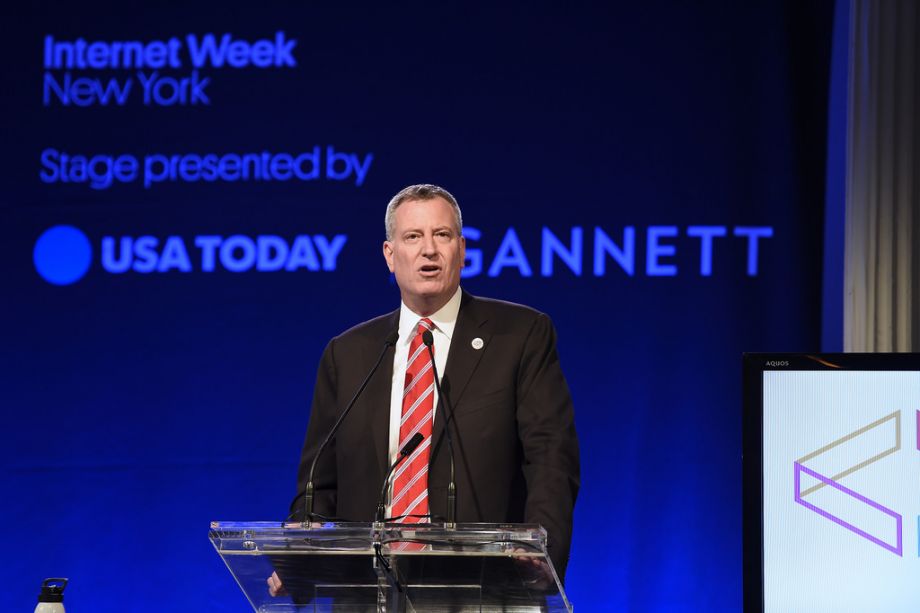 This morning in Manhattan, New York City Mayor Bill de Blasio delivered the kick-off keynote address at Internet Week New York, his first formal face-to-face with the city’s vibrant and vocal tech community since he took office nearly five months ago. In a half-hour talk, the Mayor offered both a high-five to the industry that he called vital to the future of each of New York City’s five boroughs and a pitch for the idea that the vision he’s begun executing is exactly what the local tech sector needs. “We see extraordinary possibilities ahead,” he promised.

De Blasio opened by telling the crowd about the affinity his administration feels for the city’s tech community. “Parallel lives,” he said the two are leading, with “the same assumptions and same impulses” guiding their work, namely “questioning the status quo when it doesn’t serve the people well enough.” Like good technologists, good public servants, should, the Mayor said, “be, in effect, disruptive.” Both are a natural fit for New York City, he explained. “We have a knack for embracing the change,” said the Mayor as the names of local tech and tech-powered companies, both new and old — Tasting Table, General Assembly, Wall Street Journal — scrolled on a screen behind him.

With that, it was down to business. Talent, said de Blasio, is a concern that has come up again and again in his talks with the tech sector. The question of who will be employed in the jobs created by tech has been a concern of de Blasio’s since the campaign. During that race, he laid out what he called a “Progressive Vision for a Thriving New York City Tech Industry.” In it, candidate de Blasio celebrated the tremendous growth in tech jobs in New York City, but he expressed concern that “new job opportunities in tech and other high-skill sectors have largely gone to recent arrivals to New York City.”

That seeming tension was on the stage with him today. De Blasio advocated for policies that might help open up New York tech jobs to applicants originally from elsewhere, like comprehensive federal immigration reform, municipal ID cards, and a new push by the New York City Economic Development Corporation to get work visas for foreign-born but U.S.-educated entrepreneurs.

But while “we want people from all over the world to help us build this industry here,” said de Blasio, “we have a special obligation to create homegrown talent, to help New York City residents qualify to be a vibrant part of this industry.”

To that end, de Blasio offered the newsiest bit of his speech: New York City will be launching a “Tech Talent Pipeline,” with a $10 million budget for the next three years, in partnership with, among others, JPMorgan Chase, the New York Community Trust, and the NYC Workforce Funders Group. Administered by the city, the new “pipleline” will, said the mayor, “recruit and train New Yorkers, design new curricula to meet employers’ need, and engage employers to build the talent pipeline.”

Meanwhile, on the legal front, there was a seeming nod to companies like Airbnb and Uber that are, in many cities, running smack into rules preventing their entry into established industries like housing and transportation. De Blasio citied a favorite example of economic historian Joel Mokyr: “An eighteenth-century guild in Prussia went so far as to issue an ordinance laying down that no artisan ‘shall conceive, invent, or use anything new.’” Said the grinning Mayor, “we resist that here in New York City.”

De Blasio, too, told the crowd that the city needs to get its own tech house in order and reboot the kludgy process by which companies get contracts with the City of New York.

But the second half of de Blasio’s address was dedicated to making the case that the plans for New York with which de Blasio came into office will do a great deal to help the tech industry along. (Credit where due, said the mayor; Mayor Bloomberg “did a fine job setting the table.”) He pointed to the direction recently given in the press by Erik Grimmelmann, the executive director of the New York Technology Council, on entrenching New York City’s role as a tech capital. Going through Grimmelmann’s recommendations, said de Blasio, his team was relieved: “Thankfully as we read this prescription it was a lot of things this administration already agrees with and already is acting on.”

Those agreements and actions include fixing the city’s public education system, upgrading the city’s institutions of higher education like CUNY, and creating more affordable housing.

De Blasio also declared himself to be completely on board the major tech community focus of increasing broadband access in the city. “Our approach is going to be bold and it’s going to be decisive,” said de Blasio, “because we simply haven’t done enough in this city.” He pointed to Harlem’s nascent free WiFi network, reexamining whether existing telecom providers like Verizon and Time Warner Cable are living up to their franchise agreements with the city, and turning phone booths into WiFi hot spots. De Blasio, in a second bit of news, said in the coming days his administration would be forming a “Broadband Task Force.”

Even Vision Zero, his plan to eliminate traffic deaths, plays a role in supporting New York City’s tech sector. How’s that? De Blasio didn’t make the direct connection, but — with an admitted “dash of New York pride” — de Blasio told the crowd in Manhattan’s accessible Chelsea neighborhood (the 1/2/3/A/C/E subway lines, for starters) that “if a similar gathering were being held in Silicon Valley … people would have to drive long distances to get here, then drive long distances to get back to their workplaces. But here I think a number of you will be walking back to work after this, or taking your bike, or your Citi Bike, or the subway just a few stops.”