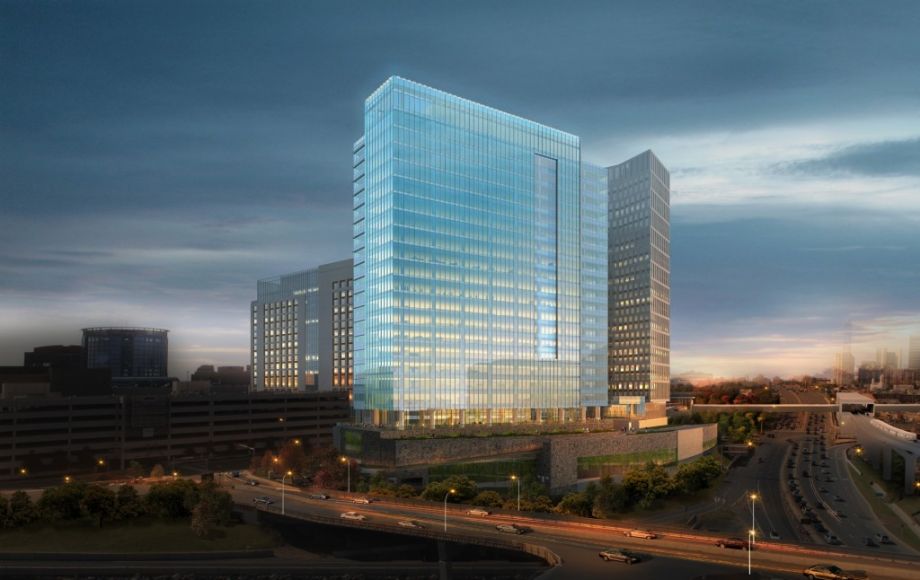 The 22-story Tysons Tower is expected to be completed in early 2014. Credit: Macerich

The largest shopping center in Virginia is expanding, and it plans to gain an office building that will stand taller than almost everything in nearby Washington, D.C.

Tysons Corner Center, one of the first superregional malls in the country, expects the 22-story, 435-foot Tysons Tower to open in early 2014 as the first completed project in a mixed-use expansion plan.

News like this doesn’t bode well for the District.

As Bill Bradley noted in a Monday blog post for Next City, height limits in D.C. may be limiting its economic growth. Thanks to the Height of Building Act of 1910, buildings in the District cannot exceed 90 feet, 130 feet or 160 feet, depending on their location. This leaves the Washington Monument, standing at 555 feet, as the tallest structure in the nation’s capital.

Why is this important? For one, the extra costs that result from height restrictions could be driving employers out of town and over to, say, Tysons Corner.

Late last year, satellite communications provider Intelsat announced that, in December 2014, it will move its headquarters from the D.C. neighborhood of Cleveland Park to — you guessed it — Tysons Tower.

“The space we have now is much larger than we require,” said Diane Vanbeber, vice president of communications for Intelstat. “We’re also looking for a much more modern workspace.”

Tysons Tower will have more than enough space accommodate the move — a fact that must have been plenty enticing, given that Intelsat signed a 15-year agreement for seven floors in a space that doesn’t even exist yet.

It’s pretty clear that, in this regard, Tysons has an advantage over Washington.

“We have the space to do this,” said Bob Maurer, senior marketing manager for Tysons Corner Center. “I don’t think [D.C. has] the same capability.”

According to a 1998 study by economists Christian Hilber and Frederic Robert-Nicoud, Maurer could be right. Looking at the “shadow tax,” imposed on cities with strict land use rules, the study concluded that Washington’s height limits added 22 percent to the cost of rent. Since then rent has only gone up, making office space in cheaper cities and towns seem much more attractive.

And height limits don’t only affect businesses. Another study, by the National Low Income Housing Coalition, found that the District of Columbia had the second highest housing wage in the country. To afford a two-bedroom rental unit, according to the study, the average Washingtonian has to earn $27.15 per hour.

But what about lifestyle choice? Surely D.C.’s urban fabric has more of a draw for young, talented workers — and the companies that employ them — than suburban Tysons Corner some 12 miles outside the city.

The expansion at Tysons Corner Center, led by developer Macerich, aims to scale back the sprawl that has come to define much of the Northern Virginia suburbs. Anyone who has ever visited this part of Fairfax County would tell you that, at the moment, the place is filled with parking lots and traffic and is nearly impossible to walk through. With the D.C. Metro’s Silver Line coming to Tysons at the end of this year, the urban fabric around here is likely to change soon.

Along with the tower, two other buildings, a Hyatt Regency Hotel and a new apartment building, will help create a new, denser downtown area in Tysons Corner. Connecting the buildings will be an acre and half of green space meant to make the area more accessible to non-drivers.

Now, it’s highly unlikely that smarter growth in Tysons Corner will do much to take away from the rapid population growth D.C. has experienced over the last decade. But if businesses continue to set up shop there, it could mean less commerce for the District and put an even further squeeze on its residents.