D.C. Taxi Boss Sees Benefits to Expanding What It Means to Be a Cab Driver – Next City

D.C. Taxi Boss Sees Benefits to Expanding What It Means to Be a Cab Driver 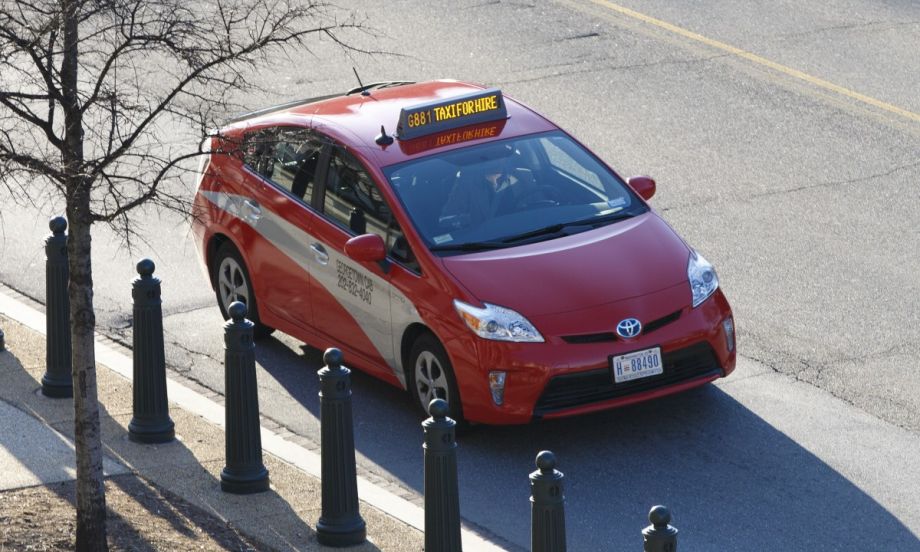 For the first time, hungry office workers in Washington, D.C., can order lunch through a delivery app — and have it brought by an official D.C. taxicab driver.

The non-exclusive partnership between the D.C. Taxicab Commission (DCTC) and Delivery.com is thought to be the first of its kind. On the consumer side, the new partnership works much like UberEats or Postmates: a few clicks (or taps) and the food is on its way. On the driver side, DCTC chairman Ernest Chrappah says the partnership is just one way that the commission is using technology to level the playing field for cab drivers.

The DCTC-Delivery.com pilot partnership was officially announced last week after a few months of quiet testing. It targets restaurants that don’t have their own dedicated delivery staff, offering them a pool of licensed drivers that are available at the tap of a button.

“What we are effectively doing is providing the glue,” says Chrappah. “We are not in the business of creating apps to compete. We are in the business of exposing assets, our drivers, or our process, or a licensed vehicle, to smarter entrepreneurs who have a business model. … We are exposing assets through APIs, so if another delivery company wants to come to D.C. they don’t have to start from scratch [developing a driver fleet].”

“Providing the glue” in this case means allowing Delivery.com to tap into the DCTC-built e-hail app. Drivers already using the app — there are 5,500 licensed cab drivers in D.C. and “thousands” using the e-hail app — can, after going through a training program, opt to receive delivery requests through the same app.

The modest pilot has already been through a few iterations, Chrappah says. “Initially, we had a broader [delivery] radius. One of the things we learned was that may not necessarily be the best fit for our drivers who … like to be in the downtown area, drivers who get the bulk of [their fares] from short distances.” So for now, only customers within a mile of the participating restaurants can order. (They can also order from one of Delivery.com’s many other restaurants — but only seven are using D.C. cab drivers as delivery vehicles.)

It’s tempting to see this as a shot in the arm for the city’s cab drivers, who have historically not been fans of e-hail apps like Lyft and Uber, to allow the taxi drivers to compete with the newer, nimbler kids on the block. Chrappah says that attitude is old-fashioned.

“The misconception is that cabs and Uber or Lyft or private vehicles are natural-sworn enemies. That’s simply not true,” he says. “We have drivers who do trips for Uber and Lyft and do deliveries for Postmates. This is about income. It’s about expanding economic opportunities. We at the commission want to ensure that consumers have choice, [and] drivers get a fair shot at making a decent living.”

For a cab driver with no passengers in the back seat, delivering lunches could be a small cash infusion.

According to Chrappah, Delivery.com pays drivers a minimum of $5 for up to a one-mile delivery, and the average customer adds a $4 tip. Five lunch deliveries per weekday at $9 each, 40 weeks a year, is $9,000, not insignificant in the taxi industry. But that assumes that every driver who wants to can make five lunch deliveries every weekday.

Whether that is possible remains to be seen, but there are a few things in the idea’s favor. First, if the pilot goes well, DCTC and Delivery.com may increase the types of things cab drivers can deliver — “there is potential for laundry, alcohol, we’ve had conversations around packages,” Chrappah says. Further, when you have packages in the trunk that aren’t lunches quickly getting cold, that frees up the driver to pick up another delivery or even a passenger, which could result in a doubling-up of fares and a set of environmental and traffic benefits to boot. Nobody wins when a driver is cruising with an empty car. Last year, Eric Spiegelman, president of the Los Angeles Taxicab Commission, said that in L.A. at least drivers spend 60 percent of their time with an empty cab. Chrappah wouldn’t share specifics in D.C. but said that drivers have “excess capacity throughout the day in different scenarios.”

Another point in the DCTC partnership is it’s not exclusive. Already the commission is working with other companies — that Chrappah declined to name — to increase the number of opportunities available to D.C. cab drivers.

The existence of a cab driver — or any driver part of D.C.’s “gig economy” is a precarious one. The city’s Office of Revenue Analysis crunched the numbers late last year and found that the number of District residents who claim to be self-employed has declined in recent years, even as Uber, Lyft and Airbnb have entered the scene and transformed the city as they have across the world. That led the office to conclude that either people are not reporting their income from these side sources, or “that the District’s gig workers — the Uber drivers, the Amazon flex folks, the Taskrabbits — are not District residents, just like the many District workers who receive minimum wage [and] do not live in the District.”

“It’s expensive to be in D.C.,” Chrappah agrees.

The new partnership “is not just about technology,” Chrappah insists. “It’s about reinventing an industry and giving people a fair shot to the middle-class.”