On the Heels of D.C. Metro’s New Silver Line, Maryland Moves on the Purple Line – Next City

On the Heels of D.C. Metro’s New Silver Line, Maryland Moves on the Purple Line 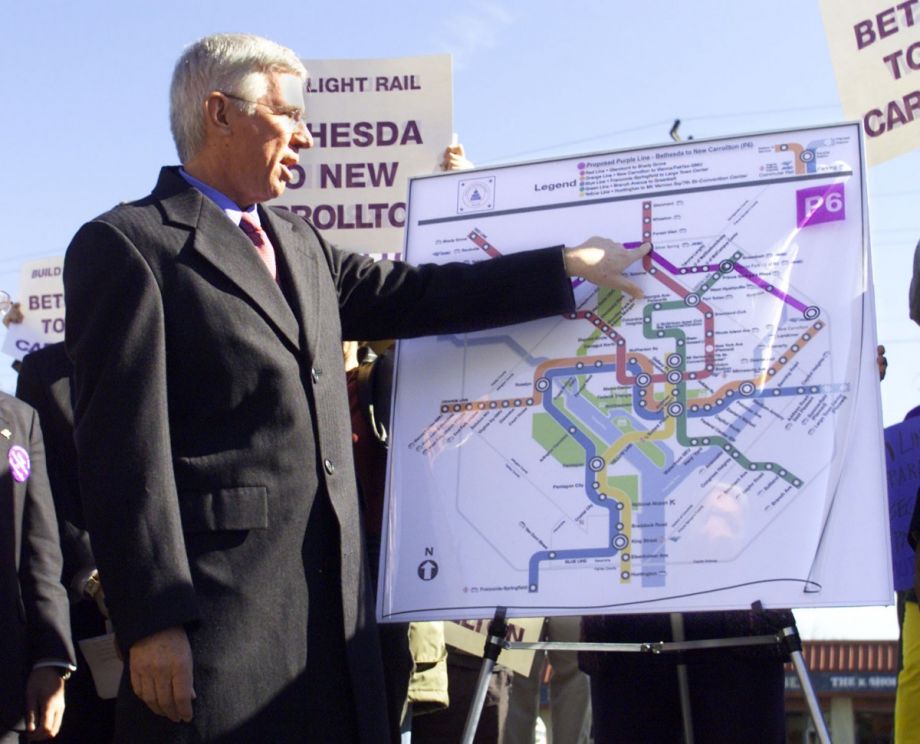 The Washington, D.C. Metro was a Johnny-come-lately to the American subway scene when it opened to the public in 1976. But as a late bloomer, it’s still building. Last month, the system inaugurated the first phase of its first new line beyond Metro’s initial hub-and-spoke plan. With five new stations now active in Northern Virginia, by 2018 the Silver Line will ply the suburbs all the way to Dulles Airport and the exurban frontier beyond.

In an unintentional cross-state game of keeping up with the Joneses, the Maryland Department of Transportation (MDOT) and Transit Administration (MTA) released a request for proposals to build the erstwhile Purple Line just a week after the July 26th maiden voyage of the Silver Line. Unlike the pedestrian no-man’s land where passengers currently disembark in sprawling Tysons Corner, the Purple Line will be a 16-mile light rail connecting dense, walkable communities inside the D.C. Beltway in Montgomery and Prince George’s counties that form the core of the new, retrofitted suburbia like Silver Spring. It will cross several D.C. Metro stops — although operated by the MTA, full fare integration with Metro is anticipated — as well as commuter rail and an Amtrak station.

Ben Ross, a longtime activist in favor of the line and author of Dead End: Suburban Sprawl and the Rebirth of American Urbanism, sings its praises. “The Purple Line has special importance for Smart Growth for at least three reasons. First, as a suburb-to-suburb light rail line it will promote the urbanization of inner suburbs (especially important in the light of Ferguson). Second, it is designed for access on foot, by bicycle, or by transit and has no new parking. Third, it shows the possibility of defeating the kind of intense nimby opposition that has crippled transit projects in other cities,” he writes.

Unfortunately, dallying on the part of Maryland officials has made the Purple Line into a pricey line. First discussed in the late 1980s, the idea of a cross-county route without passing through downtown became tangible in 2001 when announced by then governor Parris Glendening, a Democrat, at a price of $1.2 billion. His successor, Robert Ehrlich, a Republican, effectively shelved the project by opting to study a less expensive bus option and directing state transportation priorities to a $2.56 billion, 18.8-mile cross-county highway. Thirteen years later, the two-term administration of Governor Martin O’Malley, also a Democrat, is poised to make it a reality for $2.37 billion.

“You can’t take a project like this, move it ahead, and stop it for four years, then say we’ll pick it up later,” says Governor Glendening. “Under this Congress in particular, the federal government has practically withdrawn as a real partner in transit development.”

To subsequently pay for the Purple Line, MDOT and MTA are soliciting a public-private partnership (PPP). Ross wrote last year in Dissent about how the shortsighted motivations of a private developer make a PPP less than ideal for a transit line, but acknowledges, “at this point, we need to move forward and build it.”

Residents’ major concern about the PPP model is that the private developer will be responsible for many more aspects of station design and orientation than if the project were publicly financed. The Washington Post reported on fears of a cheapskate developer choosing a ramp over an elevator to meet ADA requirements, for example. Governor Glendening acknowledges, “This is a legitimate concern, and I recommend that an office of oversight be created just for this type of contract. At the same time, the companies likely to bid have built light rail in France, Sweden and elsewhere with no history of problems.”

Ross, also a regular contributor to Greater Greater Washington, believes that eventual users, a larger population than neighbors along the right-of-way, merit consideration as well. “Riders deserve a fast trip, easy access to stations, and an unobstructed view of the attractive scenery along the route,” he writes. “So far, MTA has leaned over backwards to invite feedback, and I think it has struck a good balance in responding to it.

Moreover, instead of an old-fashioned anti-transit sentiment such as concern over loss of property values, the Purple Line has created a new anxiety: Will affordable inner-ring suburbs become unaffordable, just like many transit-accessible neighborhoods in the District of Columbia? “One of the challenges not only for the Purple Line but for transit in general is to employ the tools so that a reasonable balance will be maintained for housing affordability,” Governor Glendening opines. “Everyone says that rising land values around stations is absolutely great, but an awful lot of people have been moved out. We must get far more aggressive on policy.”

For his part, Ross is optimistic that the status quo can handle the influx. “The Purple Line is part of the solution to the affordability problem,” he writes. “The growing demand to live near Metro is an unstoppable tide. The only way to prevent homes near Metro from becoming a luxury good reserved for the few is to make more of them, both by building housing near existing stations and by building more train lines and more stations.”

Montgomery County already has inclusionary zoning, which would help lower-income residents find housing near the new stations. Neighboring Prince George’s County, where average incomes, rents and house prices are lower, does not yet have an inclusionary zoning policy. With construction not slated to begin until next year for an opening date in 2020, public officials have time to study the best course of action, but if they wait too long, they’ll miss the train.