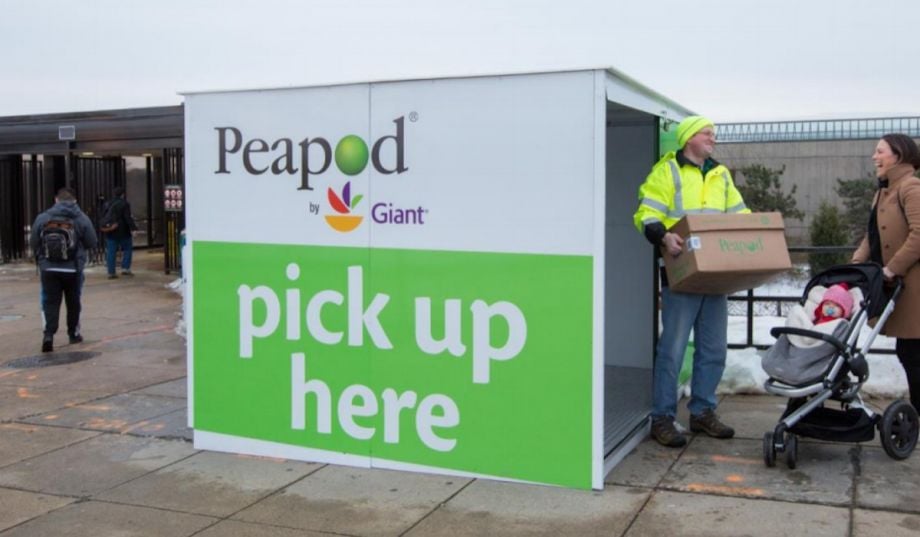 It’s thought to be the first arrangement of its kind: Customers who use the online Peapod grocery ordering service can now pick up their haul at three Metro stations in the Washington, D.C., area.

The Washington Metropolitan Area Transit Authority and Peapod are partnering for the six-month pilot, in which Peapod employees will staff a grocery “pod” at the Fort Totten, Glenmont and Vienna stations from 4 to 7 p.m. Mondays, Wednesdays and Fridays. Commuters will be able to pick up groceries ordered from Giant Food — a sister company to Peapod — on their way home.

It’s an attempt by both Metro and Peapod to add convenience to users’ — and riders’ lives. If the project is deemed successful, Metro spokesman Richard Jordan says that the agency would allow Peapod and other grocery delivery services to bid to create permanent pickup points at various stations throughout the system.

Peapod believes this is the first grocery pickup point at a metro station in the country. It’s certainly a first for Peapod, which approached Metro about the idea a year or so ago. Elizabeth Psaros, Peapod senior manager of regional marketing, says the company approached D.C. because of the high number of commuters and because Giant has such deep roots in the D.C. area.

The pilot stations “were chosen because we wanted to offer the pilot in all three jurisdictions that we serve,” D.C., Maryland and Virginia, Jordan says. Also, each station has relatively high ridership and “a significant amount of commuter parking.”

The project is clearly targeting park-and-ride commuters; all the pilot stations have large parking lots. Two are at the end of popular subway lines. And Peapod’s ordering system has a $60 minimum anyway; it’d be tough to carry all those groceries on foot.

But the park-and-ride demographic may be exactly what Metro needs. Overall, the system’s 36 parking lots and garages, most in the outer edges of the system, are about 77 percent utilized, though some stations get much heavier usage than others. And Metro expects that as long as people continue to live in the suburbs and work in the city center that ridership will increase in those outer stations. Perhaps — just perhaps — the convenience of getting an errand out of the way will draw some potential drivers to the Metro.

It would also be an alternative source of revenue for Metro, which is losing money and riders. Metro has floated concession proposals for years, some of which, like an idea to put Redbox-style DVD rental kiosks in stations, never materialized. Other retail is also tricky, since Metro bans eating and drinking within the system yet most concessionaires want to be able to sell snacks. Metro also recently changed its advertising policy, overturning a 20-year ban on alcohol advertising, in a move officials say could bring in $5 million over the next several years.