Data Bike to Hit the Trails in Des Moines – Next City

Data Bike to Hit the Trails in Des Moines 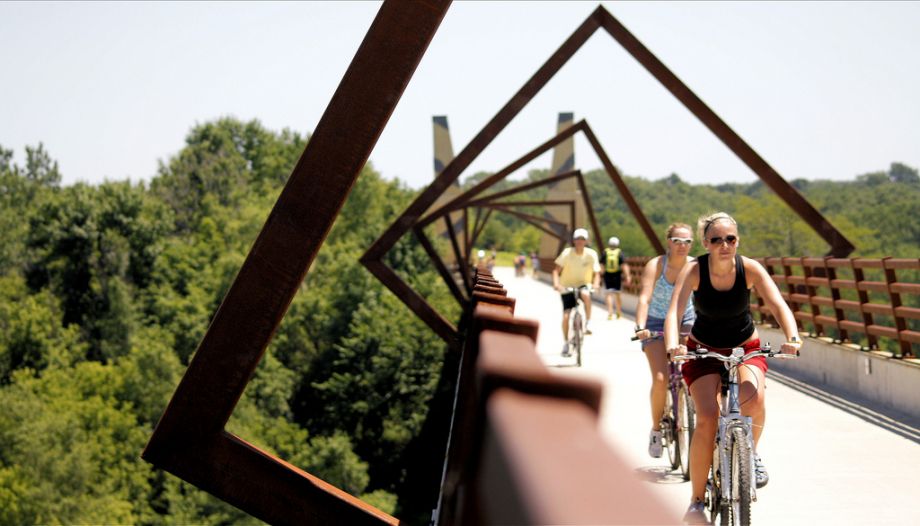 This summer, the Iowa Natural Heritage Foundation (INHF) will help map conditions on over 600 miles of bicycle trails around Des Moines. Using an e-bike equipped with cameras and an iPhone, INHF staff will ride to capture data about surface roughness and images of the trails.

The Iowa Data Bike, a joint project with the Des Moines Area Metropolitan Planning Organization (MPO) and Iowa Department of Public Health, aims to identify which sections of trail need maintenance so municipalities can direct their dollars wisely.

“We’re seeing this push on making data-driven decisions,” says Marcus Coenen, an MPO planner who has led the Data Bike project. “And then the other element of that is we have fiscally constrained dollars, so we don’t have as much funding as we had in the past. But priorities keep expanding, so we really need to have good data to say, these are really the segments we need to do next.”

The electric-assist cargo bike — purchased from a local Des Moines shop — will capture three types of information: the roughness of the trail, indicating its condition; geotagged photos of trail segments so those conditions can be indexed to actual sites; and 360-degree imagery of the trails that can be uploaded to Google Street View, allowing potential riders a glimpse of what they might find before they embark. Using an electric bike, says Coenen, will not only make the project easier for a rider, but the consistent speed will also help with data collection.

The INHF helped to preserve and develop many of the trails that make up the Central Iowa Regional Trails system, but most are now owned by their local municipalities. It’ll be up to them to make the improvements that the data suggests. Todd Ashby, director of the MPO, says doing so should be in their best interest.

“Trails have become an important part of the cultural experience in central Iowa, as well as an economic benefit to those areas,” he says.

Andrea Boulton, director of trails and greenways at INHF, says the undertaking will also help her organization and the municipalities that own and manage the trails to figure out where better connectivity is needed. Most trails are linked in a loose hub-and-spoke system, but some, like the Summerset Trail, are still cut off. INHF is actively working to connect it now.

“As we continue to grow these systems, we also don’t want to neglect what we currently have,” says Boulton. “But we need a better understanding of what we currently have.” She suspects the data will show worse trail conditions farther from the urban sections, and after the rains the region has seen recently, need for repair on low-lying sections of trail.

A dedicated intern and other INHF staff will spend the next few months riding the bike along the trail system in two-hour spurts — the length of its battery life. Boulton says the project meets many needs: While the MPO initiated it in order to drive smart investment, INHF will also be learning how to improve connectivity, and collecting information for a navigation app that will alert riders to points of interest along the trails.

The Iowa Department of Public Health also gave financial support to the project because of its potential health benefits. The agency has partnered with the MPO before to promote complete streets projects.

“Public health has lots and lots of evidence about when you improve the built environment, it makes it easier for people to be physically active, but the MPO is so much better suited to advocate for that,” says Sarah Taylor Watts, physical activity coordinator at the Iowa Department of Public Health.

Right now, the MPO is still testing out the equipment. INHF staff will start mapping in a few weeks. Boulton expects the project to take several months.